Forty years in the saddle


His first Western appearances were in two of Republic’s Roy Rogers/Gabby Hayes oaters of 1939, Days of Jesse James and Saga of Death Valley, when he was 27. In between these two he was fourth-billed, after John Wayne, Ray Corrigan and Raymond Hatton, in a Republic Three Mesquiteers film, as the eponymous Wyoming Outlaw.


But his real breakthrough came in 1940 when he starred as Red Ryder. Though Red Ryder was tall in the comic strip and Barry was only five foot four (1.64m), luckily he had a boy sidekick who was even shorter. You’d have to be quite elderly now (even older than I am) to have grown up with Red Ryder. The comic strip created by Stephen Slesinger and artist Fred Harman began in November 1938 and moved to radio in 1942. Despite two pilots, it never made the vital leap to television and was therefore doomed to perdition. However, as a juvenile twelve-chapter Republic movie serial The Adventures of Red Ryder it was enormously successful. There followed no fewer than 27 Red Ryder films between 1944 and 50, but not with Barry. Wild Bill Elliott, then Allan ‘Rocky’ Lane and Jim Bannon played Red. The 1940 hit had been enough, however, to give Donald Barry his nickname, and he was forever after Don ‘Red’ Barry. 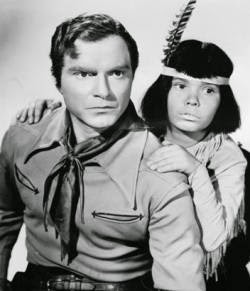 As Red Ryder, with 'Apache' sidekick
Now on contract, Barry led in a quantity of Republic Westerns, mostly directed by George Sherman: five more in 1940, eight in 1941 and seven in 1942. In one of the ’42 pictures he returned as Jesse James (kind of) in Jesse James, Jr. Eight more Westerns reached the screen in 1943. All these films seem very poor to us now but were popular at the time and made Don ‘Red’ Barry a widely-known name, at least in the B-movie world.


But it was all downhill from the end of the Republic contract onwards. He starred in only one Western in 1944, Outlaws of Santa Fe, and in 1945 was back to a supporting role in a Roy Rogers flick, Bells of Rosarita, fourteenth-billed after Bill Elliott, Allan Lane and Trigger.


There were two small Western roles in 1946, cameos really, Out California Way with Monte Hale being Barry’s last Western for Republic for eight years. There was none at all in 1947 or ‘48. In 1949 he formed his own production company and made a come-back when he starred as a marshal hunting the Dalton brothers in The Dalton Gang in 1949, followed by three other eminently forgettable B-Westerns that year. 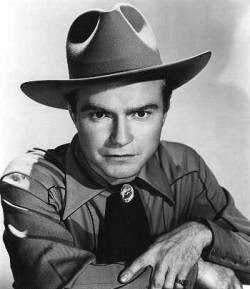 At the height of his fame in the mid-1940s
There were four productions in which he took the lead in 1950, including I Shot Billy the Kid, in which he was Billy (Robert Lowery was Garrett).


Barry’s erratic and difficult behavior made film roles increasingly rare. He was in a Stories of the Century episode on TV in 1954 and that year got the lead in a shockingly bad picture released by United Artists, Jesse James’ Women, which he also co-produced, co-wrote and directed. He was also second-billed to Judy Canova at Republic again in Untamed Heiress. 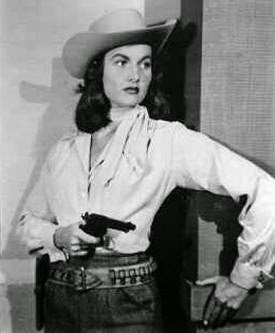 Peggy Stewart, the first Mrs. Barry (George Sherman was best man at their wedding)
There followed TV appearances in Gunsmoke, Cheyenne, Sergeant Preston of the Yukon and another Stories of the Century episode. He was bad man Clete in the Randolph Scott/Budd Boetticher Western Seven Men from Now in 1956, and was in the George Montgomery oater Gun Duel in Durango in ’57 but feature films were rare; it was mostly TV westerns in the mid-50s. He appeared, sometimes in several episodes, in Maverick, Have Gun - Will Travel, Sugarfoot, Colt .45, Bat Masterson, Lawman, Bronco, others, almost invariably as heavy.


He was in Warlock in 1957 but had sunk to uncredited bit parts. The next film Western wasn’t until 1961, Buffalo Gun. In the 1960s he made nine appearances, as different characters, in The Virginian on TV, and in the 70s he appeared in six episodes of Little House on the Prairie as farmer Judd Larrabee. 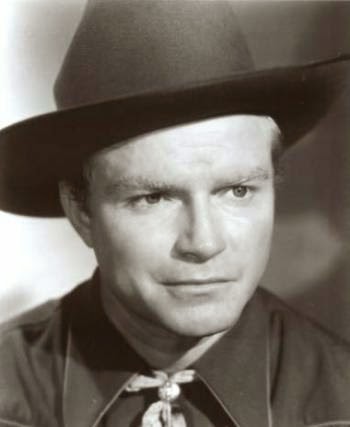 Don 'Red' Barry
There was still the occasional small part in a film Western. He was ‘Red’ in the 1964 Dale Robertson film Law of the Lawless, had a small part in Apache Uprising in ’65, and bit parts followed in Town Tamer, Convict Stage, Fort Courageous and War Party. At least he was working. In 1966 he was Confederate Lt. Farrow in Alvarez Kelly. The following year he was in the John Ireland Tom Horn movie Fort Utah. He got three small Western parts in 1968, in Bandolero!, Shalako and The Shakiest Gun in the West. He continued as occasional heavy in TV shows. He was uncredited as barman in Rio Lobo in 1970. Blink and you’ll miss him but he was Homer Rutledge in Junior Bonner.


Ego, bad temper and alcohol-fueled domestic disputes combined with lack of work and pushed him into depression, and in 1980 Don ‘Red’ Barry committed suicide.


It was not a glorious Western career and Barry was no glittering star in the Hollywood firmament but he served his time in the saddle and we recognize that stocky frame on the screen, especially the small one.

Barry the year before his death