There have been three (that I know of) motion picture interpretations of the outlaw Bill Doolin. Randolph Scott was Bill in the quality B-Western The Doolins of Oklahoma (1949), Audie Murphy played him in The Cimarron Kid, (1952), and Burt Lancaster was Doolin in Cattle Annie and Little Britches in 1981. None of these was very historical but Lancaster was perhaps the nearest to the real bandit. On TV, Leo Gordon the Great played him in a 1954 Stories of the Century episode, which was about as accurate historically as those shows usually were…


William Doolin (1858 – 96) was the leader of a gang of outlaws variously called The Doolin-Dalton Gang, The Wild Bunch, The Oklahombres and The Oklahoma Long Riders (from the long dusters they habitually wore). The gang had different personnel at different times but chiefly included George ‘Bittercreek’ Newcomb, who had ridden with the Dalton brothers but had been considered too wild, so founded the gang with Doolin; William Marion Dalton, known as Bill, older brother of Grat, Bob and Emmett Dalton and a sometime member of the California Legislature; George ‘Red Buck’ Weightman or Waightman, who joined the gang in 1892; Dan Clifton, known as Dynamite Dan, who had won his soubriquet from cracking safes; and Charley Pierce, from Indiana, born about 1866. Other members were Ol Yantis, ‘Tulsa Jack’ Blake, Arkansas Tom Jones, Little Bill Raidler and Little Dick West. 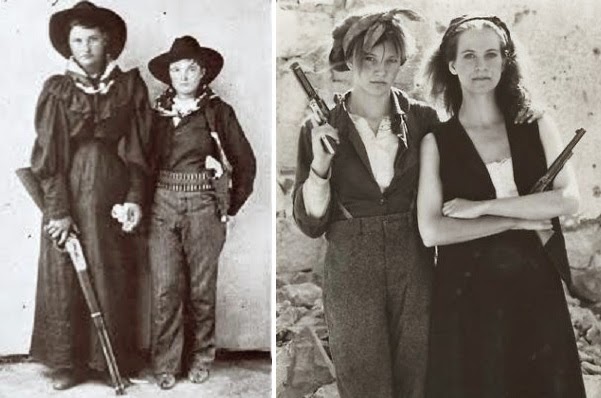 The gang was based in Oklahoma Territory but roamed over neighboring territories and states. Their first bank robbery was in November 1892 and in June 1893 they held up a Santa Fe train. On September 1, 1893, a posse organized by the new US Marshal ED Nix entered the town of Ingalls, Oklahoma Territory and fought the 'Battle of Ingalls’. Three of the fourteen deputy US marshals died; two townspeople were also killed. Of the outlaws, Newcomb was seriously wounded but escaped, and Arkansas Tom Jones, the killer of the deputies and one citizen, was captured.


In January the gang hit another bank, in Pawnee, Oklahoma, and in March they robbed the Santa Fe station at Woodward. Other depredations followed, and several failed robberies. Bill Dalton left and formed his own gang but its only job failed dismally and the gang members were killed or imprisoned. ED Nix was said to have hired a hundred marshals to root out the lawlessness. One by one the Doolin gang members were shot dead or captured. Bill Doolin was taken on January 15, 1896, in Eureka Springs, Arkansas by the great (but largely unsung) Deputy US Marshal Bill Tilghman. Doolin escaped with Dynamite Dan Clifton but was killed August 24, 1896, in Lawson, Oklahoma Territory, by a posse under Deputy US Marshal Heck Thomas.


Doolin had a reputation as a ‘Robin Hood’ figure, though there is no evidence that he robbed from the rich and gave to the poor. He robbed from anyone and kept it. He does, however, appear to have been protected, at least by silence, by many Oklahomans, who did not reveal his whereabouts to the marshals.


The 1981 movie follows the two wild young girls (Annie played by Amanda Plummer and Little Britches by Diane Lane) as they hook up with Doolin and his gang. Annie is entranced by dime novel accounts of the outlaws' exploits. Burt Lancaster, 67, in his last Western, played an avuncular Doolin as a crusty old-timer, aged, tired and on the run, but generous and kind. His gang too seem beaten down and depressed, and only ever one bare step ahead of the pursuit of the implacable Bill Tilghman. 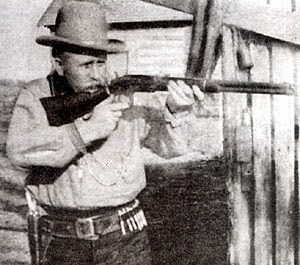 Bill Tilghman, genuine article
William Matthew Tilghman, Jr. (1854 – 1924) was one of the great figures of the West.  Buffalo hunter, saloon owner (though teetotal), Dodge City lawman, US cavalry scout, deputy US marshal in Oklahoma, Tilghman was the genuine article. He is played here by Rod Steiger. Steiger was a pretty rotten actor in Westerns and his dreadful hamming ruined several. Look at Run of the Arrow, for example. Mind you, that was directed by the trash-artist Samuel Fuller so he didn’t stand much of a chance but still, Steiger’s performance was shockingly bad. However, in Cattle Annie and Little Britches, for once, he is reasonably restrained and manages to convey a steely determination to bring the renegades to justice. At one point in the movie, Tilghman says, “Bill and me, we’re old.” Steiger was 55 and Lancaster 67 so he had a point (Lancaster was ill with hepatitis and suffered a mild heart attack during filming) although in reality at this time both Tilghman and Doolin were in their thirties. Never mind. It adds to the slight ‘end of the West’ tinge to the film: the Wild West is disappearing. The day of the outlaw and gunman is over. 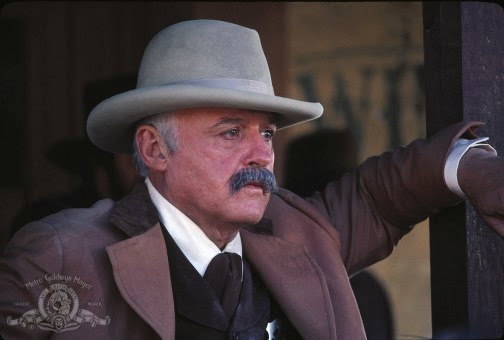 Rod Steiger as Tilghman. Restrained, for once.
Cattle Annie is an almost-comedy Western, or at least various parts of it are played for laughs and Lancaster tries for a generally humorous approach. The dire The Hallelujah Trail had showed that he was not really cut out for this but broadly speaking he does carry it off as the charming rogue. His first bank robbery is conducted very politely. Lancaster had a mixed career in Westerns. He could be very good, as in Vengeance Valley, Valdez is Coming and Ulzana’s Raid, and he could even be great, as in The Unforgiven. But he was also in some very poor ones like Lawman and Vera Cruz and even in a turkey like The Hallelujah Trail. Overall, though, he was an important and leading Western actor. 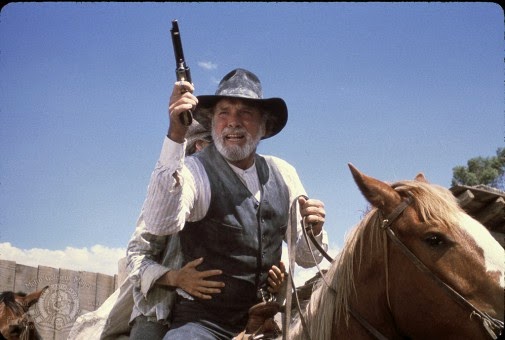 Burt Lancaster, 67, in his last Western. Respect.
Amanda Plummer (Christopher’s daughter; her mother is Tammy Grimes) is very strong without chewing the scenery and you really sense the devil-may-care wildness about her. The real ‘Cattle Annie’ was a remarkable woman and in Plummer’s performance you see that. Diane Lane plays the younger, less confident girl, clearly under the sway of Annie, but as the film progresses she develops and shows character and grit herself. She has a pretty, girlish look about her which is endearing, and she moves from fey to feisty.


Scott Glenn, star of Silverado, is a nasty Bill Dalton and John Savage (Loney in Bad Company and Steve in the 2000 TV The Virginian) pays a rather bitter Bittercreek, who in this film is a “half breed”, raised by the Sioux, and slightly New Agey in his customs. Annie falls for him. Dynamite Dan becomes Dynamite Dick (Buck Taylor, born 1938, Newly O’Brien from Gunsmoke, who is still appearing in Westerns: he was in Cowboys and Aliens in 2010 and is scheduled to appear in next year’s The Hard Ride). William Russ is Little Dick Raidler. The real George ‘Red Buck’ Weightman has for some reason been split into two characters, George Weightman (Kenny Call) and Red Buck (Redmond Gleeson). It was a good move, though, because that makes seven in the gang and everyone knows seven is the perfect number for all posses, bands of gunmen and outlaw gangs. 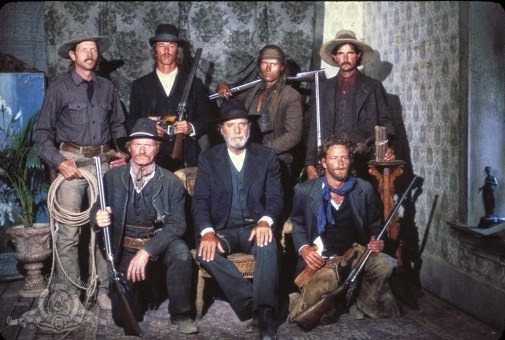 The celluloid Wild Bunch
They play baseball and go bathing in a water hole.


The largely enjoyable original music by Sahn Berti and Tom Slocum (their only Western) is full of country ballads, twangy banjos and lively fiddles, occasionally (and disconcertingly) straying into rock.


The Durango locations make for a very arid, rocky and inhospitable Oklahoma but the Larry Pizer cinematography (his only oater) makes the most of them as a Western. 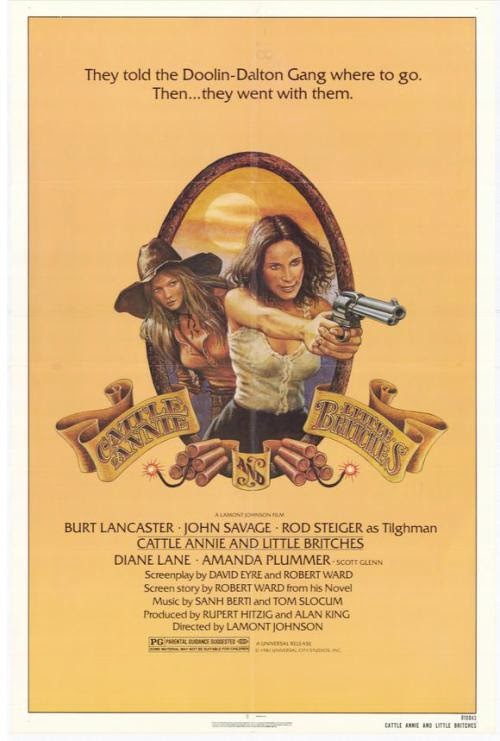 Poster
Some of the writing is quite good, especially the Cattle Annie part, as she mixes vulgarity with high-flown descriptions (the latter probably culled from “Mr. Ned Buntline’s literary works,” as she calls them). The screenplay was by David Eyre from a story by Robert Ward. It was again Ward and Eyre’s only Western, so the people behind this movie were hardly specialists. Nevertheless, they didn’t do a bad job.


Director Lamont Johnson, on the other hand, was steeped in the Western, even if it was mostly on TV. He had directed many of them, from the late 1950s on. The only other feature film Western he made was ten years earlier, the interesting and unusual A Gunfight, with Kirk Douglas and Johnny Cash both very good. Cattle Annie was his last feature oater though.


Cattle Annie and Little Britches is one of the better minor Westerns of the 1980s. Not, tragically, that there were that many.