It was directed by talented Robert Wise, the editor of Citizen Kane who went on to win Oscars for the direction of The Sound of Music (but I excuse him and will pretend he didn’t make that appalling film) and the great West Side Story.  Sadly, he only directed three Westerns, two of them superb (this one and Blood on the Moon). He had a real eye and a real feel for the West, judging by the Joseph Cotten and Robert Mitchum pictures. What a pity he didn't make more.


It’s a cavalry Western and comes from a story by Frank S Nugent who did all three pictures of John Ford’s cavalry trilogy as well as several of Ford’s later films too, notably The Searchers, for which he wrote the screenplay from the Alan LeMay novel. The Nugent story for Two Flags West was worked into a screenplay by Casey Robinson, not a Western specialist but clearly very able. 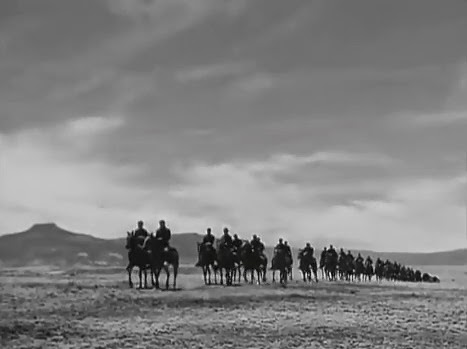 Cavalry Western
The story is about the ‘Galvanized Yankees’, Confederate prisoners of war who fought Indians on the frontier under the command of Union officers. There is a basis of historical truth in this (not that the story of Two Flags West claims to be true). Between January 1864 and November 1866 about 5600 Confederate soldiers put on the Union blue. Of the ones who served on the frontier, most were in Minnesota where there were serious Indian troubles but some did go as far south as Fort Union in New Mexico. 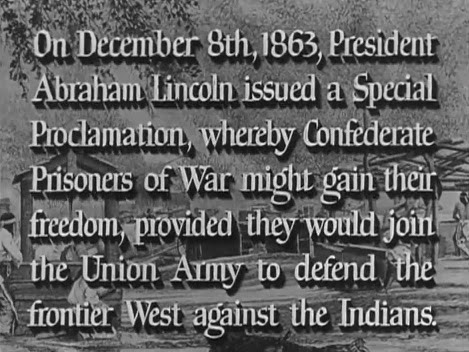 True
The idea of Confederates fightling alongside Union troops was used again later, notably in the very good John Sturges-directed Escape from Fort Bravo in 1953. In 1968 Two Flags West was remade by Sam Peckinpah as Major Dundee - or shall we say Major Dundee could be seen as variations on a theme of Two Flags West. Dundee was not Peckinpah’s best work and Heston and Harris were certainly not as good as Chandler and Cotten. Two Flags is in fact superior to both pictures.


Winter 1864. We see a prison camp in Rock Island, Illinois. CSA Col. Clay Tucker (Cotten), Sergeant Pickens – I hope he was named for Slim (Arthur Hunnicutt), Corporal Davis (Noah Beery Jr.) and the rest of the depressed men are visited by Union Capt. Mark Bradford (Cornel Wilde, who only did three Westerns, all in the early 1950s, and is quite good in this one), who offers them open air, food, a horse and forty cents a day to fight Indians out West. The men vote but the decision is tied. With his casting vote, Col. Tucker says they will go. 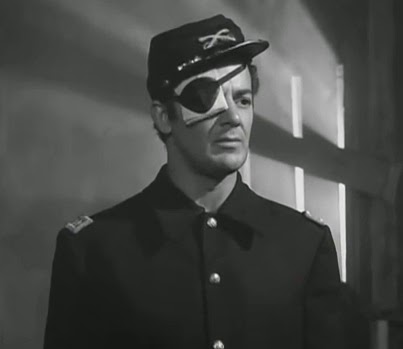 Capt. Cornel Wilde
The scene shifts to Fort Thorn, NMT. The post commander is a rigid, Colonel Thursday-ish martinet played by Jeff Chandler in one of his first roles. Chandler was often a Union soldier in Westerns (when he wasn’t Cochise) and was always very good. He was in fourteen oaters before his tragically early death, and I especially like his performances in Broken Arrow, Drango and Pillars of the Sky. He was 6 foot 4 inches (1.93 m) and with his iron-gray hair looked impressive. Brooklyn born and raised, he was nevertheless totally convincing as a tough Westerner.

In Two Flags he plays a very interesting character – and the character develops throughout the movie. He is ambitious but sidelined to a Western posting after a wound. He hates Indians as much as he does Rebels. He is bitter, grieving for his killed brother and secretly in love with his brother’s widow. He descends into a rage of hatred but ends with a noble self-sacrifice. It’s an excellently written part and a first class performance. 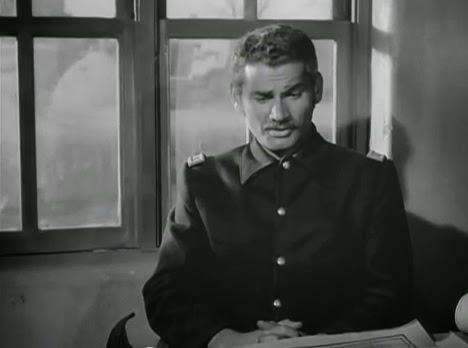 Chandler. Very good.
It is said that even when he was not needed on the set, Chandler came often just to watch Joseph Cotten before the cameras, and learn.

Joseph Cotten was a good friend of Orson Welles and is probably best remembered for the parts he played in Citizen Kane and The Third Man. He was a fine actor - though  not usually in Westerns, in which he was often very bad. From his first Western starring role in Duel in the Sun in 1946, he overacted grossly in The Great Sioux Massacre, The Last Sunset and White Comanche, appearing in nine oaters altogether. Two Flags West was only his second but far and away his best.

As a man his character is bitter at what he has lost (for he knows the war is drawing to its conclusion) and his Southern-gentleman behavior (and as a Virginian Cotten was able to carry this off) is cynical and mocking. He laughs at Linda Darnell’s character, Elena Kenniston, and in a subtle and clever performance he is self-mocking too. As a commander, however, he is in deadly earnest. He struggles to do what is right and what is best, for the cause but above all for his men. He is faced with an agonizing dilemma as to whether to desert and ride for Texas or go back to save the people in the Yankee fort from massacre. The writing, direction and acting as he ponders this problem are of very high quality. It’s a bravura effort, and worth watching the movie for Cotten alone. 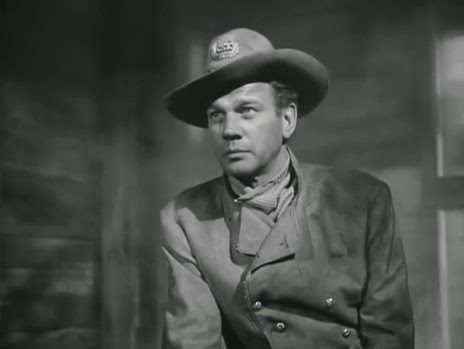 O, I wish I was in the land of Cotten...
With the working title The Yankee from Georgia, the film had first been slated for Victor Mature but in the event it was fortunate that Cotten got the part.


Noah Beery Jr. (he was just calling himself Noah Beery these days) was always very good indeed, in that Ben Johnson/Harry Carey Jr./Slim Pickens class of true Westerner character actors who always brought authenticity and magic to their roles and always elevated even an average picture to something better because of their presence. Curiously, he was to play an almost identical part the following year, as a Reb sergeant (he’d obviously been promoted in the meantime) who dons a Union uniform and ends up fighting alongside Yankees, in The Last Outpost. The Last Outpost wasn’t a patch on Two Flags West, not even in the same league, but Noah was equally good in both.

The death of Noah
Arthur Hunnicutt made the part of wisecracking scout and, later, cranky old-timer, his own. I always smile when I see his name in the titles. Here he is again very good as the Confederate sergeant whose defeat and gloomy captivity have not really dented either his sense of humor or his spirit. Another first class performance. 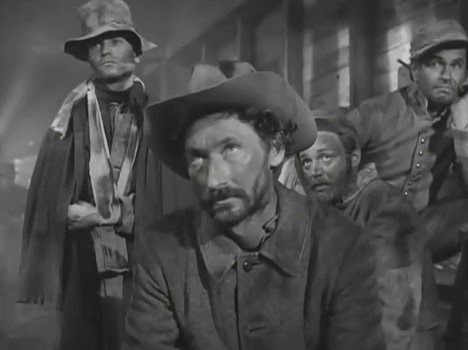 Hunnicutt. Fine.
As if these weren’t enough, we have good old Jay C Flippen as the (real) Union Sgt. Duey, old, grizzled and tough (I think he was born like that) and Dale Robertson, in only his second Western, in a small part as a Confederate trooper. 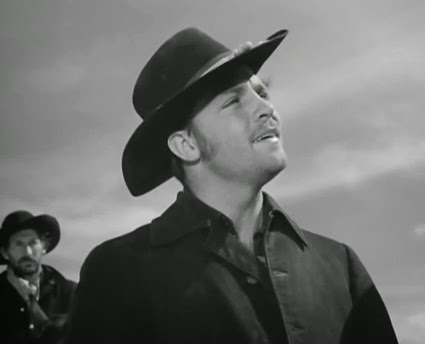 Dale's second Western
There’s some quite good badinage between the Yanks and the Rebs, especially when Sgt. Hunnicutt is riding with Sgt. Flippen. There’s also a scene of ‘competitive singing’ à la Michael Curtiz (see Dodge City,1939 and Casablanca, 1942; Casey Robinson worked a lot with Curtiz). But the overall mood of the Confederates is consonant with their situation and Wise drew a somber, low-key performance from the troopers. 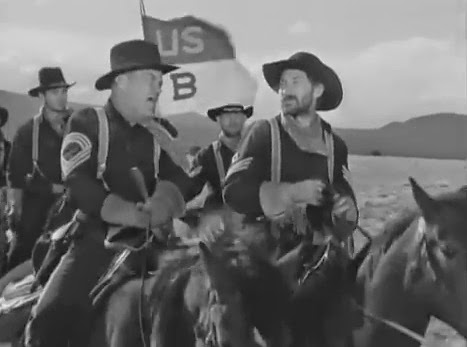 Sergeants Two
It really is an excellent cast.
If you have seen Linda Darnell only in My Darling Clementine you could be forgiven for thinking that she was a poor actress. You’d be wrong, though. John Ford and his writers tried, in that movie, to make her into a sub-Jane Russell Mexican vamp and it was a failure. But before Clementine she had co-starred at Fox with Tyrone Power on two semi-Westerns, The Mark of Zorro and Brigham Young, and was third-billed as ‘the other woman’ with Maureen O’Hara in the Joel McCrea Buffalo Bill. In all of these she did an excellent job. Two Flags was her fifth oater and possibly her very best. Later, before her tragically early death in a house fire, she was in a couple of lesser Westerns, such as Dakota Incident (in which she was also very fine) and some Western TV shows. 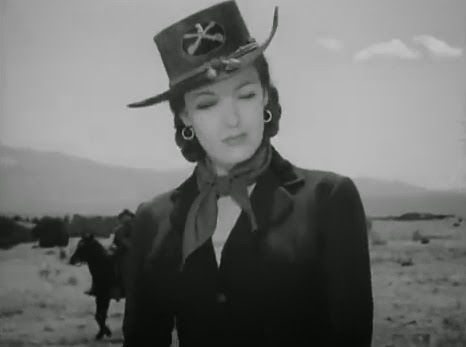 Linda Darnell. Her best Western performance?
In Two Flags West she plays Elena, a Californian lady, widowed in the war and staying with her brother-in-law, the commandant of the post, Major Kenniston (Chandler). Nearly all the officers set their caps at her but she remains aloof. Texas-born Darnell is very convincing: she spoke good Spanish and, when required, looked quite Mexican. With this Spanish look and conveying great dignity, she almost comes across as a sort of Katy Jurado (praise indeed). The director and writer handle her identity cleverly, leading Tucker (and us) at first to believe that she is the major’s wife and only then revealing that she is his sister-in-law. Anyway, Darnell is absolutely excellent in this film. 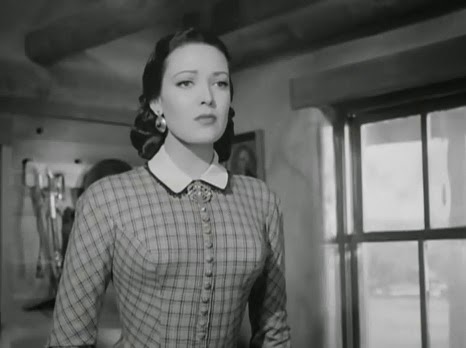 Almost Jurado
The Indian enemy are the Kiowas of Satank. You probably know that Set-angya or Set-ankeah, often translated as Sitting Bear (c 1800 – 71), raided wagon trains, settlements and even Army outposts, though he never attacked Fort Thorn as in the movie. There was a skirmish at the fort, between Union soldiers and men of the Confederate Sibley expedition, on September 26th, 1861, but no frontal attack by Indians. In the film, a half-crazed Chandler kills Satank’s son and sends his body back over a horse, which leads Satank to besiege, then assault the fort with twelve to fifteen hundred men. 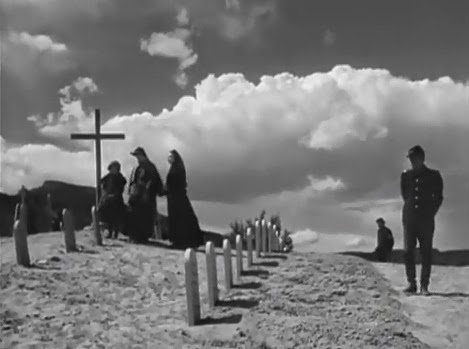 You should definitely try it. It's not every day a Western gets a Jeff Arnold four-revolver rating, you know.