The Virginian rides yet again, straight to video

It is inevitable that any great Western story will be remade in different versions as time goes on. That’s perfectly legitimate, just as new versions of Shakespeare’s plays or Verdi’s operas are often staged. We have a right to rethink these works, reinterpret them, perform them in modern dress and so on, especially if by doing so the works say something new or important for the current age. I’m not sure, though, that it is acceptable to rework a classic piece (and The Virginian is indeed a classic piece for Western lovers) to the point where the endings change, the book’s heroes become the villains and, worse, the film is not true to the spirit of the book.


Earlier this year a Canadian straight-to-video version of The Virginian came out, a hundred years after the 1914 silent directed by Cecil B DeMille and starring Dustin Farnum, which was followed by the remake in 1923 directed by Tom Forman and starring Kenneth Harlan, the 1929 talkie with Gary Cooper directed by Victor Fleming (by far the greatest treatment), the color remake in 1946 directed by Stuart Gilmore and starring Joel McCrea as the Virginian, and a TV movie of 2000 directed by and starring Bill Pullman. That’s a lot of Virginians and a lot of Trampases. We exclude the TV series The Virginian (1962 – 70) which used the names of some of the characters but bore no other relation to the book. 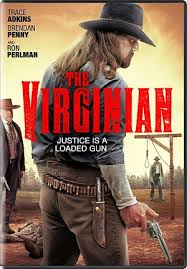 No it isn't
The new video one was directed by Thomas Makowski and written by Bob Thielke. I don’t know anything about these people. It stars an American, Trace Adkins, as the Virginian, another I’m afraid I don’t recognize – maybe you do. He was in the 2012 video Western Wyatt Earp’s Revenge. He’s from Louisiana and has some southern credentials, I guess, but he looks odd in his long hair and rather, ahem, imposing figure. To me he looks like a biker. We always imagine the Virginian as tall and rangy, skinny even, but I suppose that’s the Gary Cooper Virginian talking. He has a growly voice and tries to be a tough Westerner. He’s OK, I guess. Apparently he is a singer. 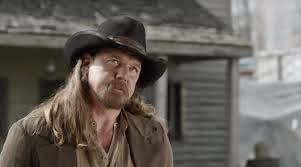 Virginian as biker
The Trampas is a Canadian in his only Western, Steve Bacic. He is a one-dimensional snarling villain, almost comically so, but this may not be Mr. Bacic’s fault: the part he has is poorly written. 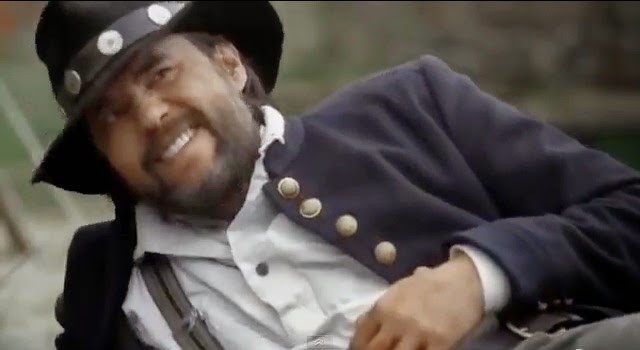 Trampas
The Molly is Victoria Pratt, a Canadian. She seems to have been in a lot of things but she looks far too ‘now’ to be convincing as a schoolma’am in late 19th century Wyoming and her diction is, too. She takes part in the silly ending by emulating Grace Kelly in High Noon. 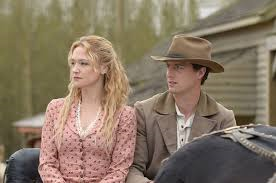 Molly and Owen
Someone named John Novak is Steve and is duly lynched, after writing a very long letter instead of the brief note scrawled on a newspaper. First he is shot and captured by Owen. The narrator is named ‘Owen Walton’ (Brendan Perry) and plays a key part in the action, shooting people, being shot and so forth. He buries his book in a grave at the end, in an odd scene, so perhaps we are supposed to imagine that The Virginian by Owen Wister was not the true version of the story. 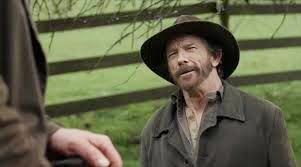 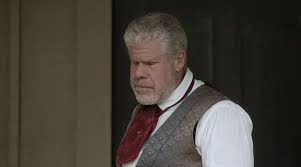 Evil Judge Henry
All the actors are obviously wearing costumes. No one seems convincing in the clothes of the period concerned.


Some of the locations are pretty. It was shot in British Columbia by Malaysian C Kim Miles, his only Western. 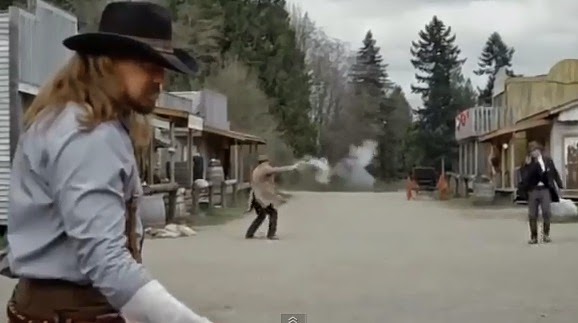 Owen: "I shot the sheriff..."
The Virginian dislikes being called that. He is given a real name, Jefferson Fuller, but most people call him South.


In the famous saloon scene Trampas calls the Virginian “bastard” rather than a son of anything and it doesn’t sound right at all.


But the worst thing really is that the Virginian abandons the ‘code’ of the West, telling Owen that it was only there “to protect the Judge Henrys of the world”. He repents of hanging Steve (“He needed help and I killed him”) and adds “I hate Wyoming”. Judge Henry pays Trampas to kill the Virginian.


I just don’t know what was gained by all this monkeying with the plot and the spirit of the book. Not much, I fear, for the film really isn’t very good.