Run out of town then held hostage in the snow

In 1869 Bret Harte’s tale The Outcasts of Poker Flat first appeared. It was later republished several times as part of various collections of Harte stories. It’s a short story, only 4000 words, and tells how, in 1850, four ‘undesirables’, having been driven out of Poker Flat, a Californian gold camp that has ‘got religion’, take shelter in a cabin and are snowed in during a long High Sierra blizzard. The four are, according to Harte, the cool gambler John Oakehurst; “a young woman familiarly known as ‘The Duchess’; another who had won the title of ‘Mother Shipton’; and ‘Uncle Billy’, a suspected, sluice-robber and confirmed drunkard.” Uncle Billy abandons them, disappearing with the horses and supply mule. A young couple arrives, Tom Simson and Piney Woods, with a very little food. Tom decides to try for Poker Flat to get help and leaves Piney with the outcasts. Time passes. Food and firewood run out. Mother Shipton expires from hunger and Piney and the Duchess are found frozen to death in each other’s arms. Oakehurst’s body is discovered beneath a tree near the cabin, a gunshot wound in his heart and a derringer fallen at his feet. 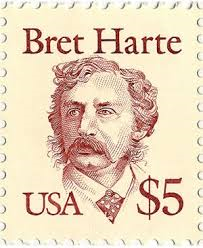 The whole notion of running louche elements out of town became a staple of the Western movie. You only have to think of Stagecoach but there are plenty of other examples.


John Ford, no less, directed the first film version of The Outcasts of Poker Flat in 1919, a silent obviously, with Harry Carey as Oakehurst. Tragically, this version no longer exists. Very few of the twenty-five silent films Ford made with Harry Carey Sr. survive, Straight Shooting and Bucking Broadway, both 1917, happily do. It is very unlikely that a print of Outcasts will ever come to light, though you never know. The American Film Institute has a summary of its plot and it is clear that it was an extremely liberal interpretation of the story, really a sort of fantasia on the theme of Poker Flat. 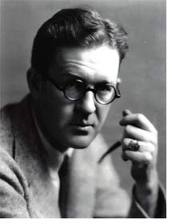 John Ford
The 1937 RKO talkie version, also a very free rendition of the original story, was directed by DW Griffith-alumnus Christy Cabanne, who was involved, in one capacity or another, in thirteen silent Westerns, and directed eight talkie oaters, of which Poker Flat was the third. It starred an excellent Preston Foster as Oakehurst, and introduced Van Heflin in his first Western (aged 26) as a worthy clergyman who cleans up the town. 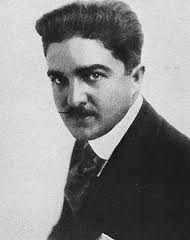 Christy Cabanne
In 1950 there was a short and pretty clunky radio version with Ward Bond.


There was a further film remake in 1952 put out by Twentieth Century Fox with Dale Robertson as Oakehurst, a very good edgy black & white noir, which we’ll look at today. Later still, there was a TV movie with Larry Hagman and one of the Kraft Theater TV series with George C Scott in the lead, both in 1958. In 1975 an Italian Western version, Four of the Apocalypse came out, very vaguely based on Poker Flat and another Harte tale, The Luck of Roaring Camp. So the story was a Western favorite, not to say perennial. It’s still happening: on YouTube you’ll find a short version some school students have recently made. 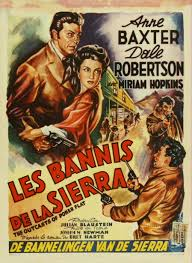 1952 version
However, the Dale Robertson version of 1952 was by far the best of them all. It was directed by Joseph M Newman, famous in the early 1950s for the noir thriller 711 Ocean Drive and the outdoor drama Red Skies of Montana. He directed six Westerns, including Fort Massacre and The Gunfight at Dodge City, both with Joel McCrea, and there was always a sort of noir tint to his oaters.

Joseph M Newman
The Harte story was freely adapted into a screenplay by Edmund H North, a good Western writer who had previously contributed to both the Raoul Walsh/Joel McCrea film Colorado Territory and the Gordon Douglas/Gregory Peck picture Only the Valiant, which latter has something in common with Poker Flat, being a tense black & white drama about ‘bad’ people under siege.


Dale Robertson was not yet famous for Tales of Wells Fargo, which started in March 1957, but he had appeared in several Westerns after his service in World War II. He was in five before getting the lead in one, the Delmer Daves-directed Return of the Texan in 1952 - a semi-Western anyway. Poker Flat was thus only his second Western lead (though even here, Anne Baxter received top billing, above Dale). 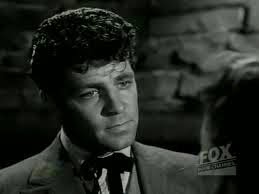 Dale Robertson in a Fox publicity photo
His performance is only just the right side of wooden. Let’s say that as Oakehurst he is formal, unbending and rather stiff, though he did bring a certain toughness and even dignity to the part. He emerges as a superficially egoistical but actually decent person. “I’m a gambler, not a crook,” he says and when Anne Baxter sneers at him, “I thought gamblers were supposed to be gentlemen”, he modestly replies, “Supposed to be. Actually, they’re just gamblers.”


Baxter plays ‘Cal’, a part not in the book (the Duchess and Mrs. Shipton roles are combined by Miriam Hopkins). Ms. Baxter was a granddaughter of Frank Lloyd Wright and won an Oscar for her part in The Razor’s Edge in 1946. Westernwise, she was in eight movies, notably as the tomboy type with Gregory Peck in Yellow Sky in 1948, another film which has certain similarities with Poker Flat, being a black & white noirish Western about good-bad people under siege. In Poker Flat she is very good, bringing a tense, edgy persona to her part. 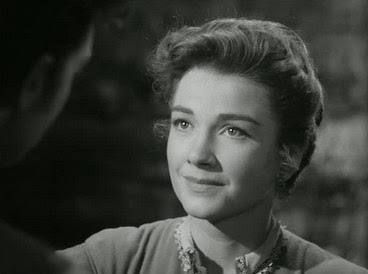 Anne Baxter
However, the acting honors of Poker Flat most definitely go to Cameron Mitchell as Ryker. Although Mitchell is probably best known for his role as happy-go-lucky Buck Cannon on The High Chaparral, he acted very well in several films after his debut in 1945 in What Next, Corporal Hargrove? He had shone as Happy in the stage and screen Death of a Salesman and he was a talented actor. From a Western movie point of view, he’d been in three before Poker Flat and later I thought he was very good in Garden of Evil and Hombre. 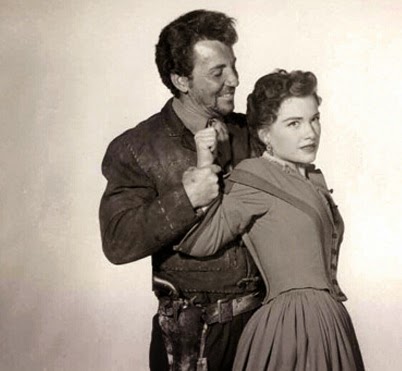 Cameron Mitchell excellent as the brutal gunman
In Poker Flat, his best Western role in my view, he plays another part not in the Harte story (it doesn’t matter), and opens the film noirishly in light and shadows by cracking a safe, cynically sending his accomplices to their death, murdering two townsmen, exploiting a woman (Baxter) so that she holds the loot, and escaping. Charming. Later, he comes to the cabin where the outcasts are snowed in and terrorizes them there, and the film is mostly a siege/hostage story which reminds me quite a lot of another excellent Fox picture, the Henry Hathaway-directed Rawhide, of the year before, with Tyrone Power and Susan Hayward, both terrific.


The other characters are written ‘down’ and the actors have little possibility to shine: the Uncle Billy part has become old Jake (William H Lynn) and he runs the horses off through drunken incompetence rather than malice, and remains with the hostages till brutally shot down (offstage) by Ryker. Miriam Hopkins was only in three Westerns: she’d led opposite Edward G Robinson in Barbary Coast (apparently she and EGR couldn't stand each other) and had been Errol Flynn’s love interest in Virginia City. Here she’s OK as the aging lady of the night but little more than that. Tom and Piney are played by Craig Hill and Barbara Bates. They are a bit on the bland side too. Bates had appeared with Anne Baxter earlier in the famous All About Eve. 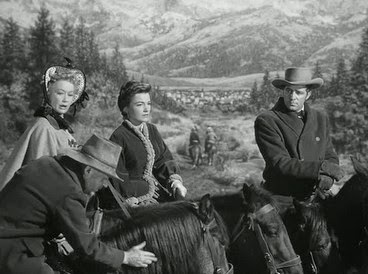 The outcasts: Jake (William H Lynn), Duchess (Miriam Hopkins), Cal (Anne Baxter), Oakehurst (Dale Robertson)
This version of the story is far from faithful to the Harte original – notably the ending - but it is certainly the closest of them all. It doesn’t matter, though, because Harte only hinted at the character of his personages and the story leaves plenty of room for interpretation and addition, and why not? I do think the ending is a slight cop-out and the film would have been noirer and stronger if the characters had been left frozen in the snow. Ryker’s end, however, is well done. The story of the revolver in the chimney is bien trouvé also.


Harte had his characters only brave the elements but the addition of the ruthless gunman is a good one, as later movies showed. In both Will Penny in 1968 and Shoot-Out in 1971 evil gunmen hold good people hostage in a cabin until the brave hero or heroes overcome them by courage and resourcefulness. Will Penny’s winter setting makes it especially Poker Flat-like. The Secret of Convict Lake, a Glenn Ford movie of 1951, must also have had an influence.


Newman and cinematographer Joseph LaShelle (an old hand who had done the silent Whispering Smith) did a very stylish job of filming, especially in the early shots of the town at night. There’s a lot of chiaroscuro and although most of the action is huis clos, taking place in the claustrophobic cabin, and therefore on a soundstage, such outside shots as there are, are well done. 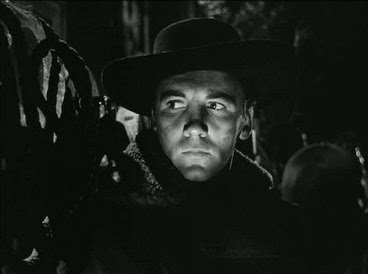 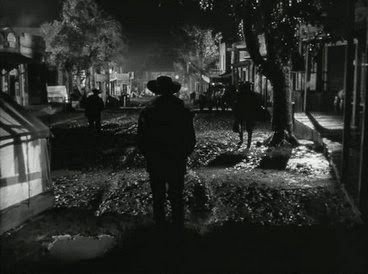 The 1952 version of The Outcasts of Poker Flat is a very good Western and I recommend it to you. John Ford had an option on the script for some time, to do a talkie remake, but didn’t in the end take it up. One wonders what might have been. But the director, cinematographer and actors made a very good fist of it as it was and if you like post-War noir Westerns, you’ll enjoy this one.


Even though there’s no derringer in it.