The Lone Ranger and Tonto ride across the big screen

The Lone Ranger rode across the West and into our hearts not only on radio, on TV and in comic books. He and Tonto also galloped through an ABC pilot movie in 1949, Enter the Lone Ranger, and no fewer than six other films. Thus, I and the myriad Lone Ranger fans all over the planet, and probably the universe as far as I know, were able to cheer to the clarion call of those Rossini trumpets and return to the thrilling days of yesteryear on the big screen as, the sterling voice of Fred Foy told us, the Lone Ranger rode again.


And in 1956 (when I was eight), he did it in color! There are certain highlights in the memories of all of us, aren’t there, unforgettable moments that serve as milestones on our path through life. Your first day at school, your first date, perhaps the birth of a child, seeing The Lone Ranger in color. Of course the last series of the TV show (1958 – 59) was in color too but to see that you needed a color TV, which we did not have. 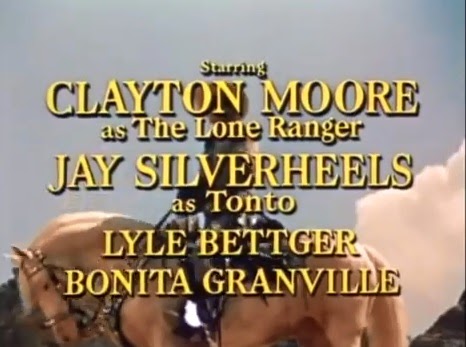 Color!
The main advantage of color was that you could see that Silver was white.


You could also see that that the ghastly suit Clayton wore was a rather twee powder blue. Oh well.


Anyway, once you got over the shock of color you could get down to appreciating the gripping action of the movie. The first thing to say is that wicked Butch Cavendish does not make an appearance. That is very sad. We were all hoping that he might have escaped from jail and was plotting anew. Glenn Strange the Great had been Butch in eight TV episodes and the TV pilot film, so we missed him.


However, there was supremely good news to compensate, for the arch-baddy was smiling Lyle Bettger (as Reece Kilgore, the excellently named big rancher – kill/gore) and his really nasty chief thug, Casssidy, was none other than arch-henchman Robert J Wilke. 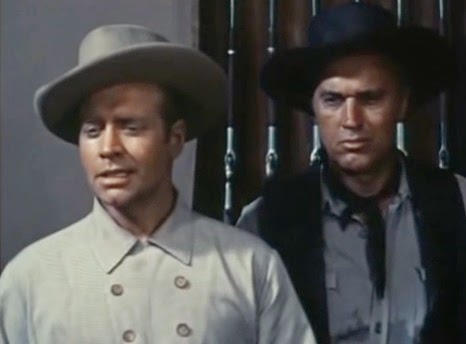 Rancher Lyle and henchman Bob
Now, as a smarmy, smiling villain no one could equal Lyle (Dan Duryea, maybe, but hardly anyone) and as boss heavy, Bob Wilke was almost without equal (Leo Gordon was a worthy rival, though). Together, Lyle and Bob were invincible. And at the end, well, I don’t want to spoil the suspense for you but at the end they fall out and go for each other! Who will win? I shan’t say. You will be in an agony of expectation until you watch the movie.


The idea is that rich rancher Kilgore is looking covetously at a mountain on the nearby Indian reservation, a mountain that he (but no one else) knows to be almost pure silver. He has to incite anti-Indian fever (not very difficult) to get the redskins moved despite a pro-Indian agent and a legally ratified peace treaty. Then he will be rich, rich! 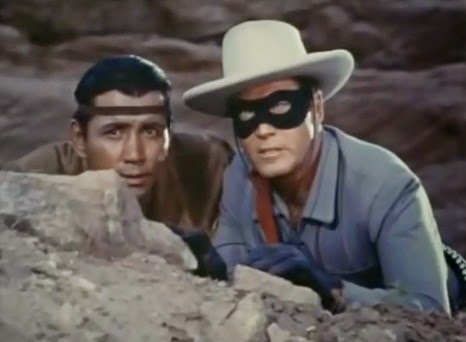 Classic shot
So he has his henchmen dress up as Indians and commit depredations. The local whites are whipped up into a frenzy of hatred. It is, as you know, conventional in Westerns (and no genre follows conventions more closely, except perhaps Japanese Noh plays and D’Oyly Carte Gilbert and Sullivan operettas) for there to be a sage, statesmanlike elder Indian chief and an angry hothead younger brave who wants war with the white eyes. So we have old Red Hawk (Frank DeKova, often an Indian chief) and firebrand Angry Horse (Michael Ansara, ditto). The Lone Ranger and (a possibly conflicted) Tonto have to convince the Indians that Red Hawk is the guy to follow and all hatchets are to be buried forthwith. The masked man does this by engaging Mr. Horse in hand-to-hand combat and showing him up for the weakling he is. The masked man gets down and dirty
There’s loads of action and adventure. Tonto gets beaten up and almost lynched before being rescued in extremis by the Lone Ranger and Silver. The masked man is shot and wounded. Of course the Lone Ranger dresses up as the old-timer to find out secrets (the only time we see him without his mask). That old prospector
There’s an explosive climax with mucho dynamite thrown. Bob Wilke empties his pistol then throws it down crossly, you know how they do. There’s murder and skullduggery.


Kilgore has a posh Eastern wife who doesn’t cotton to the wild ways of the West. She wants her young daughter Lila to grow up a lady but Lyle is determined to pretend the little girl is a boy and to bring the child up as a tough Westerner and his heir. 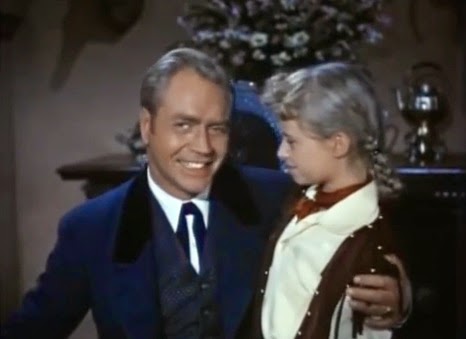 Smiling villain with son
Any psychiatrist will tell you that’s not a good idea, Mr. Kilgore. The wife is played by Bonita Granville. Ms. Granville was the wife of Lone Ranger producer Jack Wrather. She also had a small part in the 1981 Lone Ranger movie. 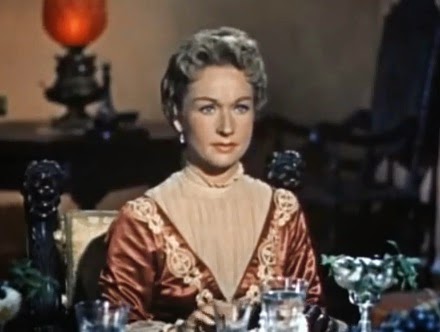 Bonita
The rendezvous for the ranchers and townsmen, prior to setting off to do a bit of Indian-slaughtering, is the site of the Pilgrim Crossing massacre, 1854. This is perhaps the film’s version of the Grattan massacre, and we are in Wyoming. Red Cloud has become Red Hawk. 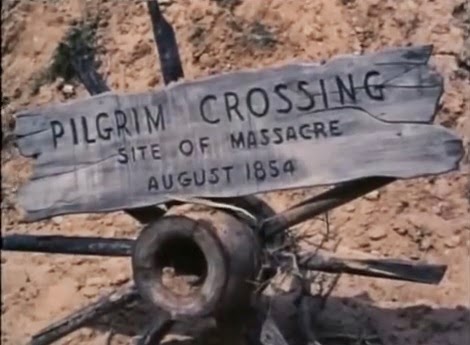 Macabre place to rendezvous
There’s a gripping finale with the US Cavalry and deputy US marshal arriving at the last minute, 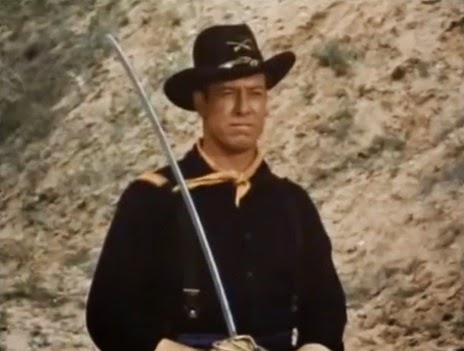 I'd swear the uncredited cavalry Lt. is a young George Kennedy
and the proper ending when Bonita asks, ”Who was that masked man?” But already the Lone Ranger and Tonto have climbed aboard their respective mounts and are off to do good elsewhere.


A perfectly splendid film with all the right ingredients. 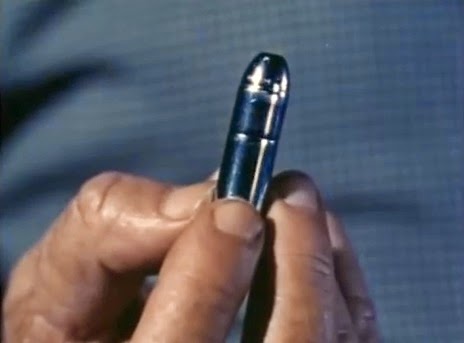