John Sturges was a talented director of Westerns. There is no doubt about that. The Magnificent Seven, his finest, is one of the great examples of the genre and has remained with me, as it has with countless other fans, ever since I first saw it in 1960 (I was 12 and went with a schoolfriend; we thought it was the best film we had ever seen or ever would see and we were probably right). It is the modern, commercial Western par excellence and so memorable that I know the dialogue by heart in three languages (having lived in various countries and watched it every time it came on TV).


And if you count Bad Day at Black Rock (1955) a Western, and many do, Sturges wasn’t just good, he was great. This is a movie to compete with The Treasure of the Sierra Madre as one of the greatest ‘modern’ Westerns of all time.


After those two, though, we descend to the good. In the case of Escape From Fort Bravo (1953) and Gunfight at the OK Corral (1957), very good, but still in the 'good' category. The Walking Hills, Sturges’s first, another contemporary Western, was a nice Randolph Scott noir but, well, a B. Backlash (1956) didn’t work for me and Widmark was poor. Sturges made a Western with Robert Taylor in 1958, The Law and Jake Wade, and contributed a few scenes to another one, Saddle the Wind, and they were good, again. Ditto Last Train from Gun Hill (1959), with Kirk Douglas again. I like both 1967’s Hour of the Gun, another Wyatt Earp picture, this time with James Garner, and the 1972 Joe Kidd with Clint Eastwood.


All of the above were good or very good Westerns. So John Sturges is an important contributor to the genre.


But his last effort, Chino, (well, he was credited anyway), a 1973 Charles Bronson picture, was very poor, Sergeants 3 in 1962 was poorer still and The Hallelujah Trail in 1965 was absolutely AWFUL. 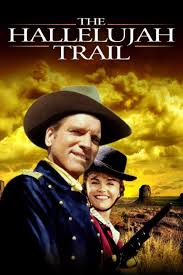 Sturges's worst
The Hallelujah Trail was Sturges’s baby. He produced and directed it and the title screen tells us that the movie is “John Sturges’ The Hallelujah Trail”. So he’s the one to blame for this dreary, overlong, badly acted, poorly directed and unfunny picture that I hope never to have to sit through again.


2 hours 35 minutes! Whatever possessed him? And why didn’t United Artists insist on cuts? Talk about self-indulgent! The film seems endless. The thin plot can’t cope with such an extended treatment. There aren’t enough songs to make it a musical and there are too many to make it a proper Western.


It must surely be one of Burt Lancaster’s worst performances. He blunders about as a non-plussed Army colonel at his wits’ end (not that the wits stretch very far in the first place) as to how to cope with a temperance/emancipation harridan (Lee Remick). There isn’t a single character in the film who isn’t stupid.


Donald Pleasence was in it and I don’t know of a Western he wasn’t dreadful in. Will Penny, Soldier Blue, Hearts of the West, he was dire in all of them. Couldn’t someone (the director, for example) have told him not to chew the scenery? Better still, the casting director should have got someone else, someone who could act and was believable in a Western.

Pleasence hamming as usual
The other actors are either just bland or wasted: Robert J Wilke and Martin Landau as ‘comedy’ Indians, Brian Keith as the owner of the whiskey-laden wagon train (he was even worse the year after in The Rare Breed), the rest of the cast completely forgettable. John Anderson as the sergeant was about the best, but it’s only relative.

'Comedy' Indians
There’s a huge shoot-out in a sandstorm where no one gets shot, and with a ‘humorous’ voiceover. It’s painful.
There are numerous scenes where a person enters a tent while another person is in the bath and these are considered hilarious, though not by the viewers.

In the bath. Hilarious.
There is of course the music. Elmer Bernstein’s score rivals the one he wrote for The Magnificent Seven and in fact they are both on the same CD I have. It is far too fine for a silly comedy Western. And there is the widescreen color photography, by Robert Surtees, no less, of wonderful New Mexico locations. Thank goodness for the music and cinematography because without them the film would be unwatchable.