As a general rule, and with certain exceptions, the Westerns Randolph Scott made for Warners were not as good as the Columbia ones. An example is the 1955 effort Tall Man Riding, which is alright, but no more than that.


It was directed by Lesley Selander, a B-Western lifer from his first picture in 1936 who moved to Poverty Row when the market for oaters declined and then to TV. He always managed to get pace into his Westerns, and his action scenes were good, even if budget and good writing was sometimes lacking.


The story (a Joseph Hoffmann screenplay from a Norman A Fox novel) is pretty stodgy. It’s a combined revenge-pursuit/homesteader v. rancher plot as Larry Madden (Randy) comes back to his Montana town after being horsewhipped by landowner Tucker Ordway (Ray Barrat) for paying attentions to his daughter Corinna (beautiful Dorothy Malone finishing up her contract with Warners and really only going through the motions).


This time Randy wants things nice and legal and has got a smart lawyer, Ames Luddington (a besuited John Dehner), to do some digging in Washington and find out if rancher Ordway has a proper title to his land. He has not. 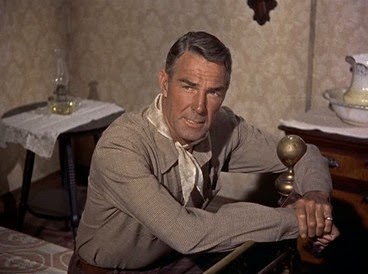 Randy out for revenge. Again.
There’s the usual racy saloon gal, Reva (Peggie Castle) the mistress of the owner, who also aims to own the town. There's Cibo Pearlo (they all have odd names) who is played by John Baragrey. Pearlo wears a smoking jacket and scent, and this was probably 50s code (rather like Anthony Quinn’s satin sheets in Warlock) for decadence or a hint of homosexuality.


There’s an inevitable gunfighter brought in by the saloon owner, The Peso Kid (Paul Richards, in his second Western) but it’s a poorly written part and not very well acted either. I think he’s supposed to be slightly effeminate. Maybe the idea is that he’s Pearlo’s lover, as far as the mores of 1950s Hollywood and Mid-West theater audiences would allow, that is. 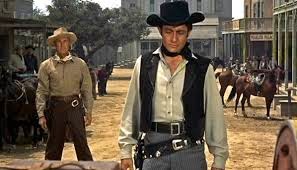 The Peso Kid
About the best actor after Scott was husky-voiced Lane Chandler as Hap Sutton, rancher Ordway’s foreman. He comes across as tough and sympathetic in equal measure. He started in silent Westerns in the late 1920s and did dozens of talkie oaters all through the 30s. In the 40s he had small parts in those Curtiz/Flynn Westerns. 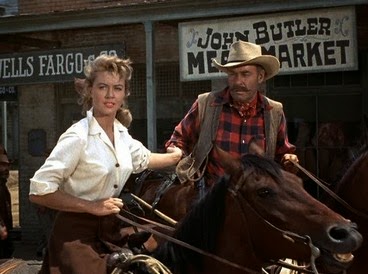 Malone (gorgeous but very average in this one) with the excellent Lane Chandler
Baragrey only did two Westerns, this one and a Dean Martin/Jerry Lewis effort the following year. He is pretty bland, to be honest.


Dehner was always very good, though here Randy is a bad judge of character because despite the lawyer being his right hand man all through the movie, at the very end, in a dramatically weak moment, he changes sides and throws in with the crooked saloon owner.


Barrat had been Chingachgook in the 1936 Last of the Mohicans with Scott and then done gangster movies with his pal Cagney. He was Duke Ring in Union Pacific. He doesn’t have much of a part here, though there’s an interesting (if implausible) bit near the end where he goes into a gunfight with Randy in a darkened room in order to even out the odds because he’s close to blind. 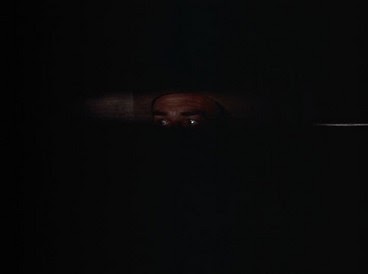 Perhaps Selander was trying for noir but he was rather overdoing it in the gunfight scene, which was a bit too noir!
There’s an (unintentionally) funny part where a proclamation is posted and we see two townsmen reading it, moving their lips as they mouth the words silently.


We wouldn’t mind the over-talky bits between the quite good action scenes if the talking was any good but sadly it isn’t. There are no jokes and there’s no comic relief part (no humorous old-timer, for example) so the overall tone of the movie is quite dark and tough.


In one fight Scott is clearly replaced by a double but in another, under a wagon, it’s obviously Randy and in fact he nearly got hurt when the wagon moved. The only casualty (though a grave one) was Randy’s hat, Chapeau, which got crushed. 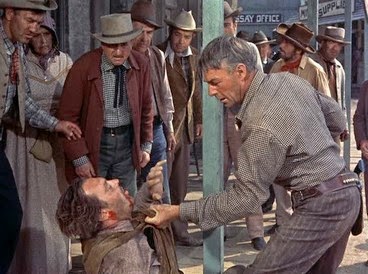 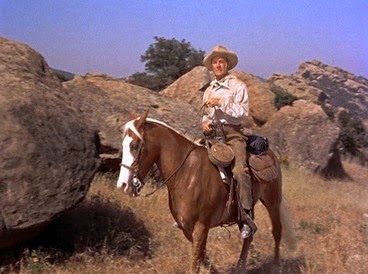 There’s a land rush, as if the Cherokee Strip had been moved to Montana, which is rather unlikely but quite exciting and well done. Dehner is a sooner, of course. There’s a silly ending when Malone, who has despised Scott throughout the film, suddenly changes her mind in the last ten seconds and goes off in his arms. Lucky Randy, though.


There’s a fair amount of location shooting. Warners didn’t scrimp and save on that. It was filmed up at the Iverson Ranch and in Hidden Valley, in nice color, by Wilfred Cline, who was an artist.


Well, well, sometimes corn gets mixed in with the oats. Probably the horses don’t mind.