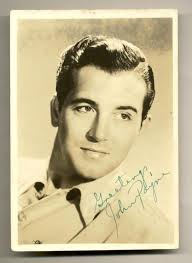 The star of Miracle on 34th Street and The Restless Gun started as a singer on New York radio shows and had a pleasant high tenor voice. He signed for Fox and took the lead or support part in a number of popular musicals. After World War II, in which he was a flight instructor, he was attorney Michael Gailey in Miracle on 34th Street, his last film for Fox and probably his most successful role.


Later in his career Payne changed tack and started appearing as tough guy in films noirs. His first Western was El Paso with Gail Russell for Paramount in 1947 (we discount a musical ‘Western’ of 1939, The Royal Rodeo, and a 1940 logging picture King of the Lumberjacks). El Paso wasn’t bad – yes, it’s a B-Western but with redeeming features. Payne plays a smooth Easterner gradually turning into a tough Westerner – which was just what was happening to him!


There followed nine other Westerns, starting with Paramount’s The Eagle and the Hawk with Rhonda Fleming in 1950 (a Civil War/Mexican spy drama) and the wagon train story Passage West, this time with Arleen Whelan, in 1951, again for Paramount.


There was something Hollywood-beefcake about him and he could have done Tarzan pictures or something but he was capable of some acting subtlety. 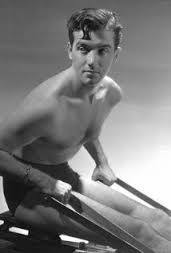 The Vanquished appeared in 1953, another Pine-Thomas production for Paramount, this time with Jan Sterling, a Reconstruction story. The following year he did two oaters, Rails Into Laramie for Universal and immediately afterwards Silver Lode, a Benedict Bogeaus production for RKO, both with Dan Duyrea entertaining as the villain and acting as lively counterweight to Payne’s stolidity.  Both are entertaining B-Westerns well worth a watch, Rails being the better of the two and in fact Payne’s best so far. Payne was looking quite good in the saddle now. 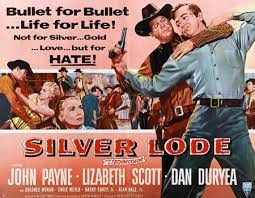 In 1955 there were three Westerns, Tennessee’s Partner, Santa Fe Passage and The Road to Denver. They were colorful B-movies. The first, once more with Rhonda Fleming,  was loosely based on the Bret Harte story and the last-named, with Mona Freeman, was a typical Republic offering with some good character actors, especially the bad guys. The middle one was the weakest. Slim Pickens was in it but even he couldn’t save it and John Payne was at his most ordinary too. It was really rather a silly story and it also had an unpleasant anti-Indian tinge.


Rebel in Town in 1956 was Payne’s last Western feature before he concentrated on his TV series The Restless Gun. It was different: the only one of his oaters in black & white, it was a tense Western noir, well written and showing subtlety and power. Payne himself was very good in it. In fact it was his best Western of all. 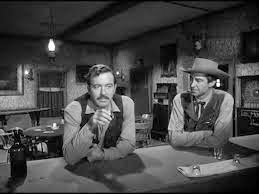 Rebel in Town, dark and powerful
In every case but the last Payne shrewdly insisted that his movies be shot in color, or he wouldn’t do them, and he retained the later TV rights. This made him rich. In later life he added to his wealth as a real estate developer in California. 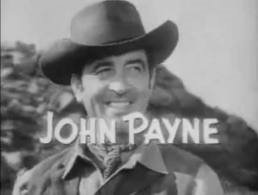 In the 30-minute black & white pilot of The Restless Gun, aired on CBS in 1957 as part of the Schlitz Playhouse series, written by NB Stone Jr. from a Les Crutchfield story, Payne introduces his character Britt Ponset, gunslinger with a conscience. Riding to visit his friends, former Marshal of Laredo Dan Mailer and his wife (William Hopper and Joyce Cunning), Ponset runs into Red Lawson (Andrew Duggan, the sheriff in Decision at Sundown and the sentimental Catholic priest in The Bravados) who tells him that he is gunning for Mailer. Marshal Mailer put him in prison in Laredo four years ago and he’s out for revenge. 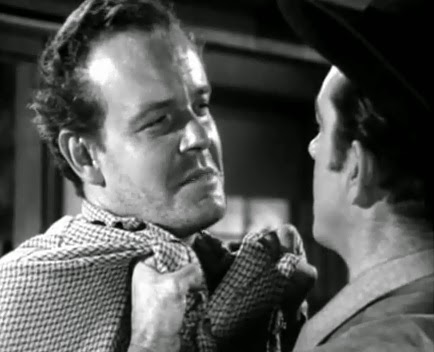 Andrew Duggan as villain
The trouble is, Mailer has now hung up his gun, married and settled down as a farmer and the couple have a ten-month-old baby. He’s as rusty as his gun is, while Lawson is greased lightning. What can Britt do to help? Mailer won’t let Britt fight his battles for him…


There’s a punk kid in town, too, Sandy, excellently played by Michael Landon, 21 and already an experienced TV western hand. He challenges Britt to a quick-draw contest, the fool, and rather than injure or kill the boy, Britt makes him look foolish. Uh-oh. He teams up with badman Lawson in the saloon and they hatch a fiendish plot. 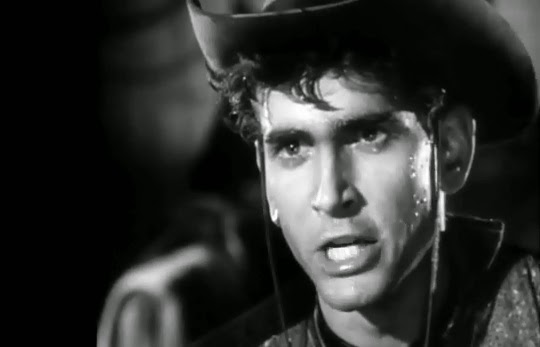 
At the end of the episode Britt rides off to take a job near Waco, and the series is launched.


Britt Ponset, now renamed Vint Bonner, will roam the West on his horse Scar and although he is a gunslinger, he will always defend the weak and decent folk against the badman and avoid gunplay if he can but be lightning fast if he can’t… The series had something in common with Have Gun, Will Travel and Wanted: Dead or Alive in that the hero is a slightly dubious character but always managed to do good.


The basic idea (and the Britt Ponset name of the pilot) came from a radio show starring James Stewart, The Six Shooter.


You can see the pilot and several episodes on YouTube. A few will probably be enough and it must be admitted there was a certain sameness in the plotting. But they are quite well produced and directed. Payne himself was executive producer on 77 episodes (though it may have been just a vanity credit) and the series was very much his baby. Edward Ludwig (quite highly regarded by some) was the director of most of them. He had made his first Western as a silent back in 1922, then from 1947 on did three B-Westerns before moving into TV. Many writers were used. Payne himself wrote three episodes.


Payne was pretty stolid generally but he could produce flashes of anger and toughness which were quite good. He’s sometimes been called a poor man’s Dick Powell (they were both song ‘n’ dance men who turned to films noirs) but that’s a bit unfair. He did have a certain presence, I think. 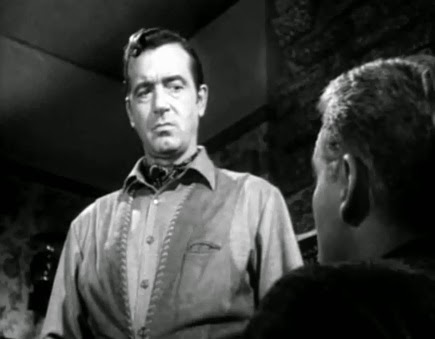 
If you want just one episode, try Man and Boy. In this, Vint comes by chance to Clay City where the sheriff is Emile Meyer (not for the first time) and the blacksmith is Dan Blocker in a handlebar mustache. With Landon and Blocker that was half the future Cartwright family right there; in fact David Dortort produced The Restless Gun before going on to… Bonanza.


Vint learns there has been a hold-up of the express office and the robber slew the express men in cold blood. All the clues point to the sheriff’s son Ted, a spotty youth (Martin Braddock). Sheriff Meyer is more than reluctant to pursue the bandit, to the point of dereliction of duty. It takes John Payne to track down the culprit and bring Meyer back to his sense of duty.


“It’s surprising how little people know about one another; even those with the closest of bonds,” Vint says in his habitual voiceover. “It takes a little more effort to see the good in people as well as the bad, but it’s worth it.”


They even had the luxury of some location shooting (about twenty seconds anyway). You don’t get that in every 1950s half-hour TV western. 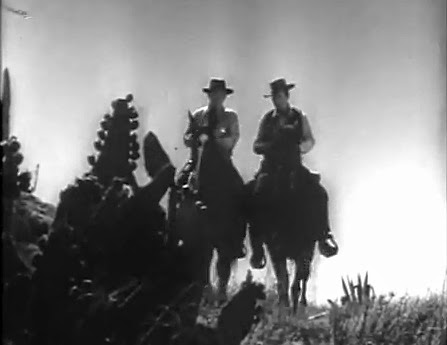 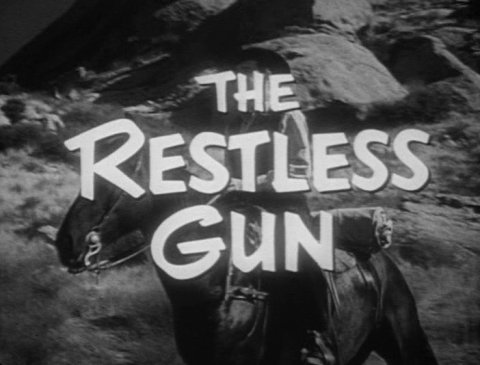 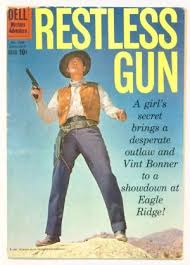 
In March 1961 Payne was hit by a car in New York and nearly died from his injuries. He survived but they left him scarred. At the very end of his Western career he appeared in a couple of Frontier Justice episodes and a Gunsmoke.
I certainly wouldn't put John Payne in the top rank of Western movie or TV stars but he was a reliable player, had the tough mien of a Westerner and was capable sometimes of sensitivity. 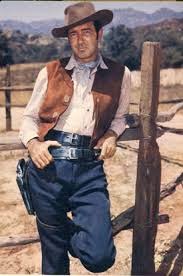