Independent producer Nat Holt did some good Western work between 1949 and 1955 for various studios, and cooperated especially well with Randolph Scott and Dale Robertson.  No one would pretend that his films were great works of art but they were mostly well-made good fun B-Westerns. 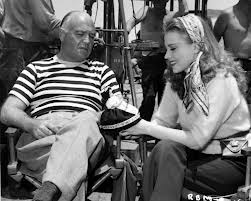 Nat Holt on the set of another picture (with Ann Jeffreys)
This time it wasn’t Randy or Dale but Sterling Hayden in the lead. Flaming Feather was Hayden’s fourth Western and his second as top-billed player. He was in his mid-thirties and, although he rather despised acting as a profession, and Westerns as a genre, he was in his prime and was a cracking good Western tough-guy hero. 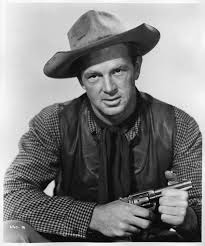 Excellent tough-guy hero
Actually, Flaming Feather is a very old-fashioned Western and aside from the Technicolor could have been made at any time in the 1930s with any number of programmer/serial cowboys in the lead. The plot is the old one about a mysterious bandit who is marauding through Arizona, but is eventually unmasked by the hero and turns out to be the leading townsman. 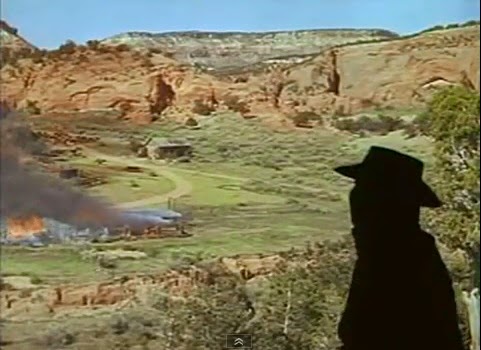 The mysterious Sidewinder in (not very convincing) silhouette watches as his henchmen Indians burn an honest settler's farm. But who is he?
This story was done to death in endless kids’ matinée oaters but here it is done with gusto, some excellent actors and nice location scenery shot by Ray Rennahan, and if you are prepared to suspend your credibility (you have to be or you wouldn’t watch Western movies at all) you’ll enjoy this horse opera romp. I thought it was great. 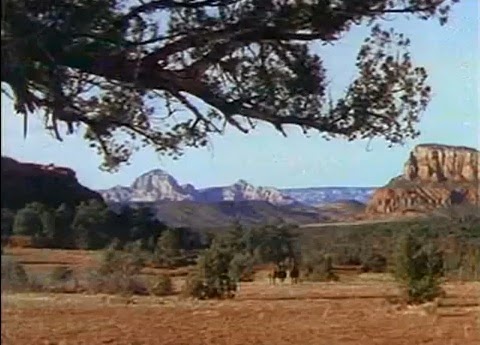 Nice AZ locations shot by Ray Rennahan
The director was good old Ray Enright, he of the 1942 The Spoilers who also did four other Randolph Scott Westerns, including the fine Coroner Creek. It was his last foray into the West, sadly. 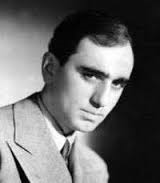 Ray Enright
The suspense is somewhat spoiled by seeing Victor Jory’s name in the opening credits. We all know he will turn out to be the mysterious Sidewinder and our suspicions are confirmed when we learn that he is the leading townsman, is charming and about to marry the girl. Sure enough (and this is not a spoiler: it’s too obvious) it’s Victor. Jory was splendid as the badman in any number of Westerns and I always think “Oh, good” when I see his name in the cast. He was in 77 oaters, bless him, from the 1933 version of Smoky to The Mountain Men in 1980. Always excellently villainous, even before he said anything and even when he was (mis)cast as a goody. 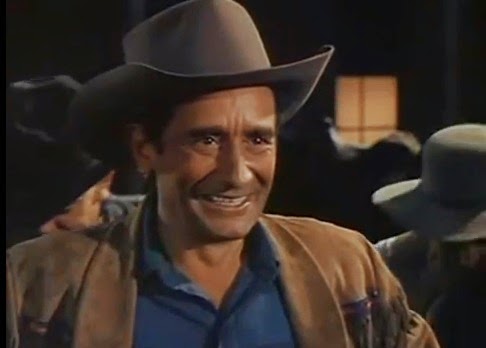 Jory, spendid villain
Sterling is Tex McCloud, a rancher whose stock is driven off by the Sidewinder’s fifty Utes, and they even kill his fat Mexican singer sidekick José (Nacho Galindo), the swines. Sterling vows to get the evil bandit chief.


The Army is after the Sidewinder too. In the saloon are decent, upright Lt. Forrest Tucker and crusty, whiskered Sgt. Edgar Buchanan - he was a sergeant a few times, e.g. in Buffalo Bill. It’s really an excellent cast. They have trailed all over the country without success. They wager a year’s pay that they will find the marauder before Sterling does. As if. 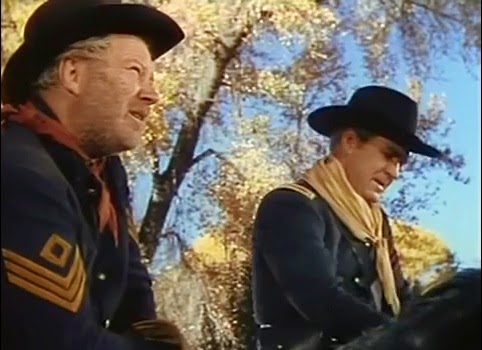 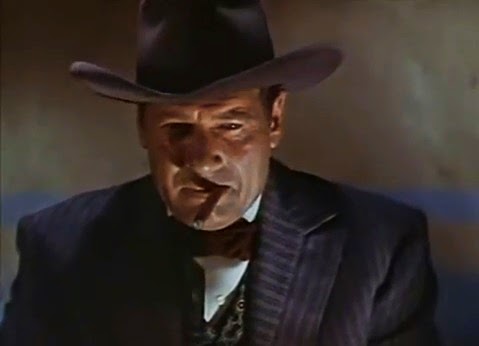 Sinister gambler Showdown Calhoun: is he the Sidewinder?
and glam singer Carolina (Arleen Whelan, often raising a single eyebrow to show acting skill; perhaps that’s where Roger Moore got it from), who tries to seduce/recruit Sterling. She wants $20,000 back from Lucky Lee (Jory), the town boss, and will do anything to get it. She couldn't be the Sidewinder, could she?

Racy saloon gal Arleen Whelan. Rather glam, you have to admit.
The great Ray Teal is (disgracefully) uncredited as the Coconino County sheriff who advises Sterling. Coconino is the one with Flagstaff and the Grand Canyon in it, as doubtless you know. Ray takes no further part in proceedings. What a waste. Anyway, he couldn't be the Sidewinder. 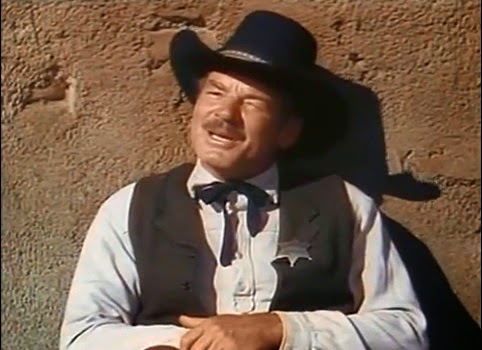 The great Ray Teal, wasted in a bit part
So the plot is all set up. There follows skullduggery of every kind. Sterling rescues the fair Nora Logan (Barbara Rush) who turns out to be Lucky Lee’s fiancée so Lucky is beholden to our hero. But not that beholden… 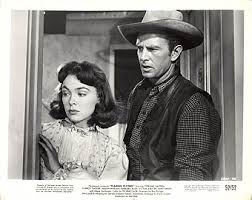 Sterling rescues Barbara in her bedroom
There’s some very good music by Paul Sawtell, one of those scores tailored to the images with sub-Wagnerian themes for each character, including the excellent four-up Concord which has a chirpy tune as it is shown bowling along. It’s a proper red stage with yellow wheels, which is right and proper. Actually, when I say sub-Wagnerian I ought to add very sub. Still, it’s fun. 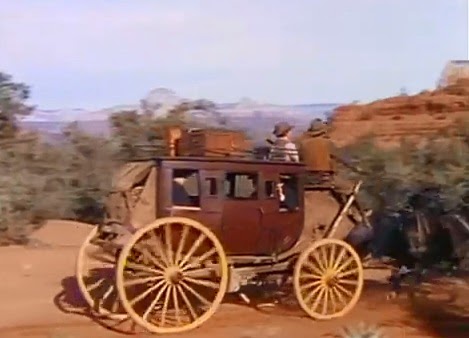 Proper stage
There’s a comic-relief doc/JP (George Cleveland) who is rather de trop given that Buchanan is providing the amusing old-timer part, and should probably have been written out. There’s also an obligatory Indian maid, Turquoise, in love with Lucky and furiously jealous of the fair Nora. She is sent packing, back to her people by the cruel Lucky who has simply used her. The ‘Indian’ is played by Irish-Montanan Carol Thurston (Emma Clanton in Wyatt Earp on TV), who looks as Indian as I do (and I don't).


Then there’s yet another candidate for Sidewinder. It’s two-Colt gunslinger Tombstone Jack (Ian MacDonald). But Lucky does for him in a street gunfight and, as we know, he was only a distraction, a false scent, because it’s Victor who is the real villain. 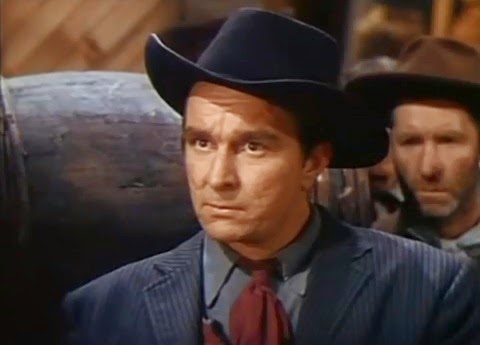 Gunfighter Tombstone Jack: is he the Sidewinder?
Doc, Indian maid, gunslinger, gambler, crooked town boss, saloon gal, sheriff, they’ve all been crammed in to the Gerald Drayson Adams story, Adams of The Duel at Silver Creek, The Battle at Apache Pass et al. So no shortage of clichéd characters. And luckily some good character actors to play them – Jory, Tucker, Buchanan, Teal.


There’s a big shoot-out with the Indians in which Carolina and Showdown Calhoun (he really loves her) perish nobly, then the climax comes at the so-called Montezuma’s Castle in Arizona (which has no connection with Montezuma and isn’t a castle but otherwise it’s an accurate title) with mucho gunsmoke and of course Sterling gets to go off with the girl. It’s a heap of fun, and an excellent watch for the Western fan, which I heartily recommend. 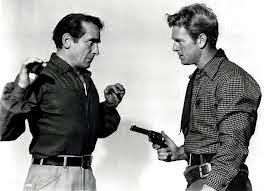 Well, it was Victor. We knew that all along.