The fact behind the myth

Searching for a neutral and definitive biography of Buffalo Bill, preferably with no revisionist slant or other agenda, on the advice of reader Bob Madison and also that of Joseph G Rosa, I ordered The Lives and Legends of Buffalo Bill by Don Russell (University of Oklahoma Press, 1960) from amazon. While waiting for it to come (and amazon seems noticeably slower these days) I found on my shelves a forgotten treasure. I usually write on the flyleaf of books I buy when and where I purchased them and I see that on August 13th, 2005 I was at Lookout Mountain, Colorado, Bill’s final resting place, and in the store there bought a copy of Buffalo Bill and His Wild West: A Pictorial Biography by Joseph G Rosa and Robin May (University Press of Kansas, 1989). 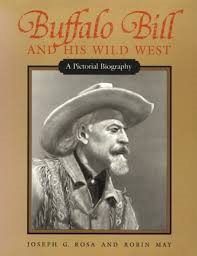 Recommended
I have just read it (I don’t know how it got overlooked on the shelves) and I must say it is extremely good. Mr. Rosa is of course the great authority on James Butler Hickok (1837 – 1876) but he has made excellent excursions from the world of Wild Billery before - such as The Gunfighter: Man or Myth? (University of Oklahoma Press, Norman, 1969). And Hickok’s path crossed that of Cody several times. There is a suggestion that Cody tried to emulate the slightly older Hickok in certain ways. It seems only proper that Rosa write about Buffalo Bill, and his co-author Robin May has also written before on the history of the West, alone and in conjunction with Rosa. 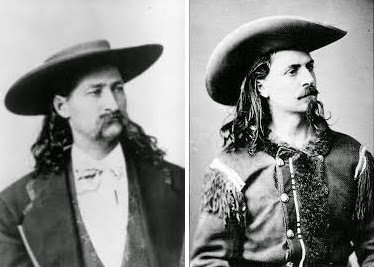 Hickok and Cody
Buffalo Bill and His Wild West is divided into five chapters: The Making of a Plainsman, about his youth and life on the frontier; The Wild West, about the early days of the Wild West show; The Conquest of England, about Bill’s tours to the UK; International Triumphs and an Indian Tragedy, about the further growth and travels of the show; and Old Scouts Never Die, about the declining last years.


I especially enjoyed the first chapter. It is very hard to get at the truth of Buffalo Bill’s youth and career on the plains. The dime novels about his life by Ned Buntline and others may be safely discounted as historical fact. Many writers have used his autobiography and various reminiscences as a source. This is probably a mistake, however, for four reasons: he had a very bad memory for dates; he loved tall stories and was very prone to exaggeration; he was hard-drinking man and such men are not always totally reliable in what they say; and he was a showman in later life and he made it his business (literally) to play up his exploits. I do not mean by this that he was a braggart and a liar. He comes across as sympathetic, he had many excellent qualities and he certainly did remarkable things as a scout. There is no doubt about that. But there was at times, especially later on, just a little something of the mountebank about him. That’s the impression I get, anyway.

What a poseur. But he was entitled.
It appears, for example, from Rosa & May’s book, and they are convincing, that despite what Bill often said and many writers have taken as gospel, Bill was never a Pony Express rider. In 1857, aged 11, Bill rode for three months for Russell, Majors & Waddell as a messenger boy. Perhaps in the way that tales get magnified over the years in the retelling, this grew into his being a regular Pony Express rider, outperforming all the other riders, naturally.

He was always something of a ladies' man...
But it doesn’t matter: take Bill with a pinch of salt, for what he was, warts and all, and admire him as a great figure of the West, a loving father, a charismatic man and deserving of enormous credit for popularizing both the history and the myth of the Wild West. So many features of Western ‘culture’ and conventions of the cowboy film date from Bill’s show. Rosa and May’s closing words are, “We are forever in his debt.”


The book truly is a pictorial biography and one of the excellent features of it is the selection of photographs and other images. There are of course the classic ones we all know, such as Cody posing with Sitting Bull, but there are also some which I had never seen before and which are absolutely fascinating. Though the text is excellent, I recommend this book for the illustrations alone. Some of the selected images come from the Buffalo Bill Historical Center in Cody, WY, the town he helped found, but Rosa & May’s research has thrown up many more. Some come from their own private collections. 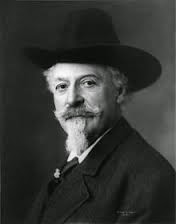 In another age this would have been a portrait by Van Dyck or Franz Hals. What a distinguished old gentleman he was.
Well, I’ll be back with more Buffalo Billery, doubtless, when amazon finally get their act together and the Russell arrives. Till then, e-pards, happy trails! 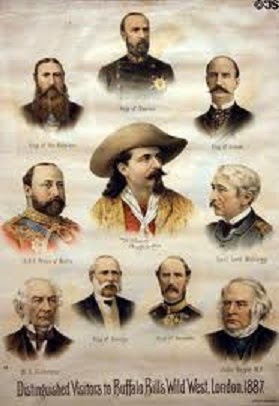