Not one of the strongest Sterling Hayden efforts

Arrow in the Dust was a color B-Western Sterling Hayden made in the same year as Johnny Guitar but it has none of the Nicholas Ray Johnny quality.


It really ought to be named ‘Arrows in the Dust’ because the idea is that two arrows tied together, one Apache and one Pawnee, are fired as one into the soldiers’ camp to show that the two tribes have united in war against the bluecoats. The story, an Oregon Trail wagon train tale, comes from a book by the prolific LL Foreman (whose novel The Renegade became The Savage). 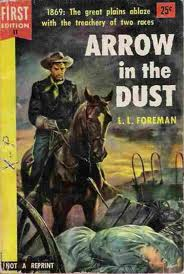 LL Foreman Novel
It was adapted by Don Martin, whose first Western this was (he later wrote the screenplay of the Joel McCrea oater Stranger on Horseback). 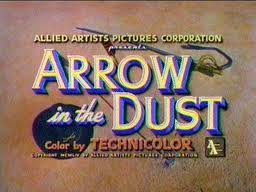 An AA B-movie but still in Technicolor and shot on location in the Simi Hills
It was directed by good old Lesley Selander for Allied Artists, so was a low-budget B. Nevertheless, it has a reasonable if unstellar cast and some decent location footage (Burro Flats, Simi Hills and Iverson Ranch, in California) shot by Ellis W Carter, who had done El Paso and was to work again with Hayden the following year on The Last Command. It was no Poverty Row Z-movie. Selander was a B-Western lifer who went right back to the silent days and did cheap programmers all through the 1930s and 40s. Arrow was his centenary Western so maybe he had a cake with candles on the set. About his best effort was Fort Yuma in 1955.


Hayden is a “gambler, gunfighter, now a deserter” who comes across his cousin, a major (Carleton Young) who has received a mortal wound in an Indian attack, and out of conscience he dons the major’s uniform and takes over command of a detachment guarding a wagon train. 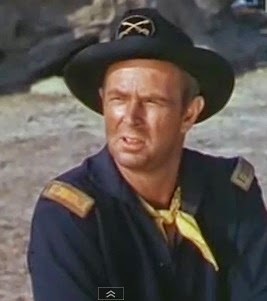 'Major' Hayden
The writing has little to recommend it. It’s one of those Westerns in which the Indians are simply nameless hostiles to be shot down in droves and there’s a good deal of implausibility in the plot. 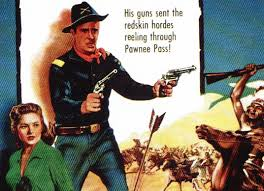 "Redskin hordes", indeed. They should have been past that by 1954.
The conventions are observed. In the first reel deserter Hayden gives money to an orphan: as you doubtless know, this is semiotics at work and signifies that he may be a ‘badman’ but is good really. Time and again you will notice the hero be kind to a child or animal in the opening scenes of a Western, and, conversely, anyone abusing either is instantly recognizable as the villain. 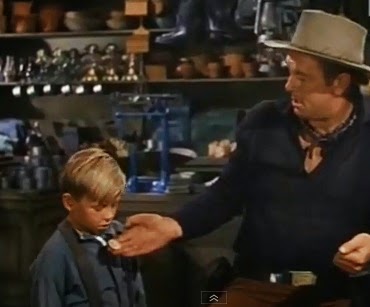 Must be a goody
He is immediately sussed out by the tough Army scout Crowshaw (Tom Tully, rather good) but the scout elects not to give him away, recognizing grit and hoping the 'major' will get the wagon train through. 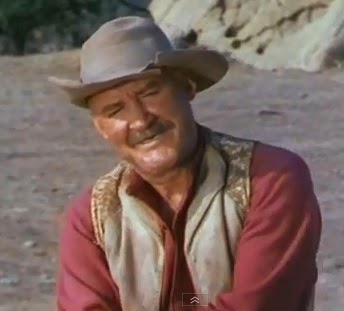 Tom Tully, rather good
One of the wagons is owned by the suspicious Tillotson (well-known Welsh character actor Tudor Owen) and you don’t have to be a Pinkerton detective to guess that he is running guns or whiskey to the Indians, or both. One of his henchmen is Lee Van Cleef. You may guess what happens to them. 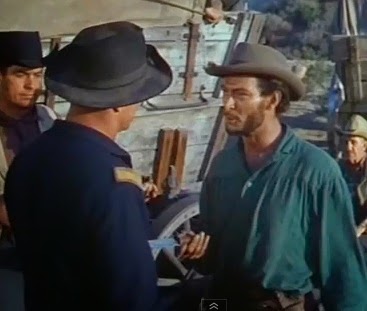 The eternal henchman
Naturally there’s a beautiful woman on the wagon train. That was obligatory in 1869. She is Christella Burke, played by Western vet Coleen Gray (Fen in Red River and Molly in Fury at Furnace Creek). The Army lieutenant (Keith Larsen, Bat Masterson in Wichita) fancies her but she casts her eye over Sterling. Who will win her hand? Oh, you know. 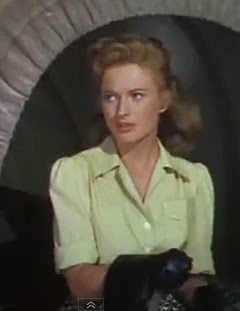 A fair colleen
There’s a burial which is almost moving as Hayden recites Psalm 23 over the graves.


I was worried about Hayden’s horse, constantly tossing its head. I don’t know if it had a cruel bit or Hayden was riding on too tight a rein, or both, but the beast stopped as soon as the man dismounted and I was concerned for the animal.


Arrow in the Dust is a missable B-movie and certainly not in a Western fan’s must-see category. Still, Sterling Hayden’s in it and I have definitely seen worse.