Ambush was Robert Taylor’s third Western as lead. In 1941 he had been an unconvincing Billy the Kid and there followed an oaterless decade. In 1950, however, he made two good ones, the Anthony Mann-directed Devil’s Doorway and Ambush, and in the decade that followed he matured into a good tough-guy Western hero and made some excellent movies. Robert Taylor
His dark looks and strong face helped. He loved horses even as a child and rode very well (watch his horsemanship in Billy the Kid, it’s pretty impressive) and that helped too. He was a Westerner: his family lived in Oklahoma, Missouri and Nebraska, where he was born.


Ambush was directed by Sam Wood, noted for having done two of the Marx Brothers’ best films, the Robert Donat Goodbye Mr. Chips and the 1943 For Whom the Bell Tolls. He was definitely in the top rank of 1930s and 40s directors. He only directed four Westerns: a 1924 silent, Rangers of Fortune with Fred MacMurray in 1940, Saratoga Trunk (if you call that a Western) with Coop and Bergman, and Ambush, which was his last movie. So he was no Western specialist, but Ambush showed that he could have been. 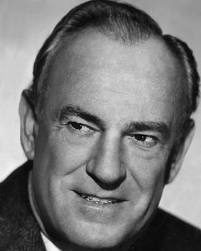 Sam Wood
The film has one huge advantage. It was based on a 1948 Luke Short novel. Regular readers will know what a fan I am of Luke Short’s work. Ambush, like all the others, was a taut, gritty tale with well-developed characters, authentic detail and a real sense of setting. Another plus the movie had was that MGM got Marguerite Roberts to adapt this novel into a screenplay. True, Roberts had written the rather turgid The Sea of Grass but she was a real talent who later worked on 5 Card Stud and Shoot Out but earned undying fame for her brilliant adaptation of the wonderful Charles Portis novel True Grit into the equally great 1969 movie of the same name with John Wayne.


Ambush is on one level just a 1950 black & white B-Western but as soon as you watch the opening sequences you realize that it has real quality. No music. Sinister war drums slowly beating. The camera pans over the dead bodies and smoldering burnt-out wagons of a massacre. The word AMBUSH leaps to the screen.


It’s a cavalry Western, in the golden age of them (John Ford’s great trilogy appeared 1948 – 50) and indeed, there are even certain Fordian echoes to this one. We are in Arizona, 1878, the world of the Apache. The fearsome Diablito (Charles Stevens, half Apache and a grandson of Geronimo) is off the reservation and on the warpath.  This can’t have been the mighty White Mountain Apache chief Heske-hldasila, known to the whites as Diablo, who sagely made peace with General Carleton in 1864. Perhaps the idea is that Diablito was a son or more bellicose follower. 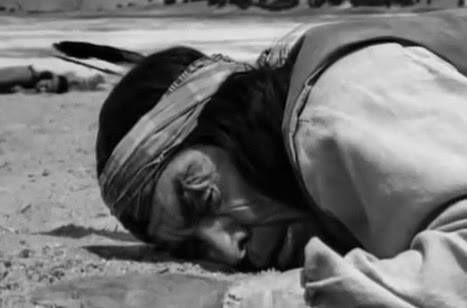 Diablito plays possum
After the massacre the scene shifts to a prospector in the hills, Ward Kinsman, and we see Taylor in a guise that fans of well-groomed stars do not expect: unshaven, dirty and scruffy – but authentic. 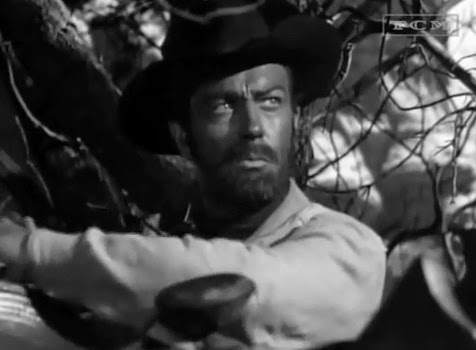 Stubble and sweat
Then, in a brilliant performance as scout Frank Holly, very reminiscent of Al Sieber (whom, of course, he was to play in the Robert Aldrich-directed Apache) four years later) comes the excellent John McIntire, to find Kinsman. McIntire invests Holly with a mixture of fear at being cut off in Apache territory and courageous savvy in extricating himself and Kinsman from the danger. It’s a fine piece of acting. In beard and buckskins, he looks like a cross between Al Sieber and Buffalo Bill Cody. The outstanding John McIntire as Sieberish scout
The photography by Harold Lipstein is luminous and the monochrome suits the aridity of the New Mexico locations and the harshness of the subject. This was Lipstein’s first Western and he and director Wood did a great job. Lipstein went on to make fifteen more, including (visually) excellent pictures such as Across the Wide Missouri, Chief Crazy Horse and Pillars of the Sky.  Kinsman and Holly get away (just) from the hunting Apaches and it all makes a very exciting beginning to what is already shaping up to be an excellent film.


We meet some of the other actors once the two get back to the Army post. My pal Ray Teal is a captain, luckily, though in a small part, regrettably. How often Ray was wasted in minor parts. He was so good, he deserved more. The protagonists, though, are second-billed John Hodiak as Capt. Ben Lorrison and his (he hopes) intended Ann Duverall (Arlene Dahl), and in another, more daring, relationship, Don Taylor (in the first of only four Western movies he did) as Lt. Linus Delaney and Jean Hagen from Singin’ in the Rain - only this and the 1953 Arena as far as Westerns are concerned - as enlisted man’s wife Martha Conovan. 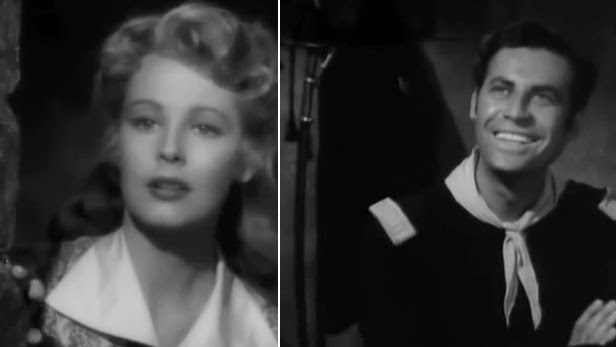 Arlene Dahl and John Hodiak. She seems destined for the handsome captain. But...
Hodiak died young, at 41, in 1955. He would certainly otherwise have been a major Hollywood star. He was Mr. Anne Baxter, though never starred with her in a Western. He led in two Columbia Westerns, Conquest of Cochise (in which he was Cochise) and another ‘ambush’, this time Ambush at Tomahawk Gap, both of the last two Arizona Indian stories, both in 1953. In Westerns he was reliable, looked the part and carried it off well.


Arlene Dahl was only in five Westerns, The Outriders with Joel McCrea and Ambush, her third, both in 1950, being the best. She plays Ann Duverall, the sister of a woman, Mary Carlyle, captured by the Apaches and she begs an - at first - unwilling Kinsman to rescue her sister. Of course a relationship blossoms between Kinsman and Duverall, which puts Capt. Lorrison’s nose out of joint. The captain and Kinsman come to blows, and in another scene unusual for Westerns of this era, Lorrison beats Kinsman hands down at fisticuffs. Arleen wears rather low cut costumes which might have raised a 1950 eyebrow or two and certainly an 1870s one. You don’t get to appreciate Ms. Dahl’s redhead beauty in this black & whiter, though.


There’s another love story. Drunken, abusive trooper Conovan has a pretty wife, Martha, whom he beats. Martha does laundry for the post and Lt. Delaney seems to have an unusual need for clean shirts… The idea of officers consorting with the wives of enlisted men was rather shocking in the 1870s (and probably the 1950s, come to that) and so this adds another rather osé aspect to the picture. Drama is added when jealous husband Conovan gets drunk and sticks the commanding officer (Leon Ames, Dean Stockwell's rich dad in Cattle Drive) with a pitchfork. 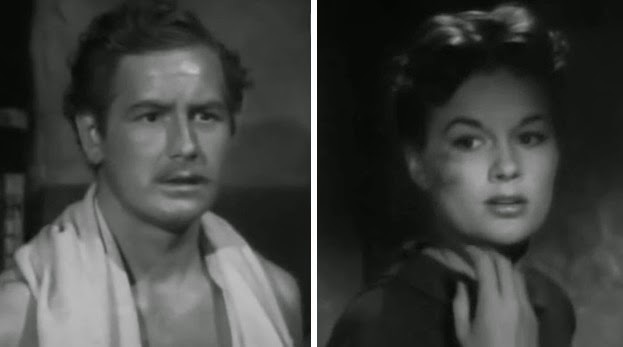 Don Taylor and Jean Hagen play a couple in an adulterous relationship
Well, much adventure follows, and Woods handles the action scenes very well, building to a tense final confrontation with the Indians. I shall not reveal what happens but let me just say that the way is cleared for Kinsman and Delaney to go off with their respective amours.


Good writing, direction and acting elevate this film into ‘A’ Western territory. Add authenticity, fine photography and Indians, played by Indians and speaking their language, with at least some personality and justification, and you have a movie well worth a watch. Recommended. 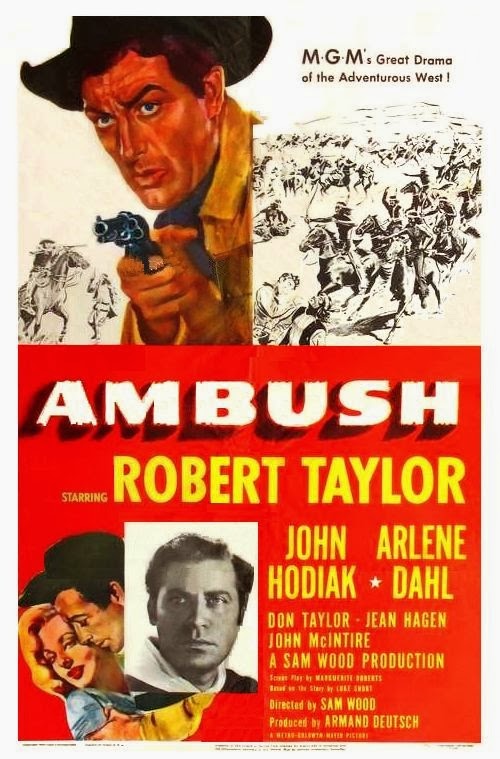