Gold and cattle in British Columbia

Randolph Scott made a pair of ‘Canadian’ Westerns for Fox in 1949 and ’50, the pretty weak Canadian Pacific and the livelier Cariboo Trail. They were both directed by the solid but uninspired Edwin L Marin and both had Victor Jory as the bad guy.


Canadian Pacific suffered from poor writing (Jack De Witt and Kenneth Gamet) but Cariboo was written by Frank Gruber, a B-Western specialist, certainly, but experienced (this was his fifth oater) who went on to do some excellent little pictures like Denver and Rio Grande and a few more Randolph Scott movies. Gruber could do pace but also managed some (limited) character development. The story was provided by Scott’s friend John Rhodes Sturdy (splendid British Empire name) who had worked as technical advisor on Canadian Pacific. In the town they come to, Carson Creek, the name plate outside the doc’s reads ‘John S Rhodes MD’ so Sturdy got his microsecond of fame. 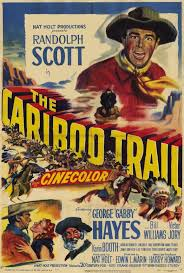 Quite fun
It’s about gold discovered in British Columbia and how Randy and his partners drive cattle up there from Montana to settle in the Chilcotin country, “a cattleman’s paradise”. In fact, though, it could have been set anywhere and is a pretty generic Western, with standard elements such as a town owned by the bad guy, rustlers stampeding the herd and the like. 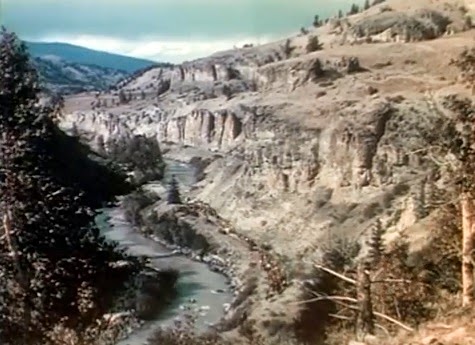 Lovely scenery
OK, the whole thing is a bit routine but it’s fun and a typical Randolph Scott Western with action and zip.


Second-billed as “also starring” comes Gabby Hayes as Grizzly, a grizzled old-timer prospector, the kind of role he perfected. J Carrol Naish had tried a similar part in Canadian Pacific with only limited success but Gabby brought predictable fun and energy to the comic-relief role. 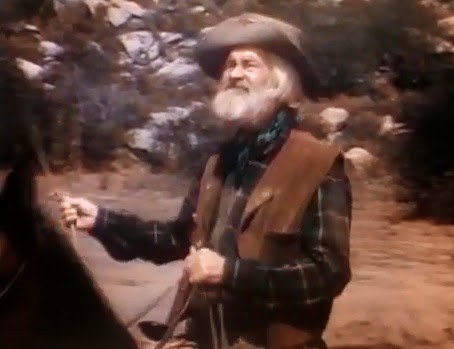 Gabby on Hannibal
Next in the billing comes Bill Williams as Mike Evans, Randy’s partner until Randy has to cut Mike’s arm off after a stampede, then Mike gets all sour and resentful. Can’t imagine why. Williams had been a reliable ‘nice guy’ lead and second lead for RKO and in fact had done some quite interesting pictures. Later he was Kit Carson on TV. He’d started in West of the Pecos with Robert Mitchum and this was only his third Western. He did the occasional Western movie but really concentrated on The Adventures of Kit Carson from 1951 to ’55. He’s OK in The Cariboo Trail, although his reconversion in the last reel is too sudden and hardly credible (more the fault of director and writers really) and his armlessness is so fake you can easily see his limb tucked into his bulging shirt. It’s all a bit amateurish, I’m afraid. Not that I am expecting him to have his arm amputated for the part or anything. Though he could have. No, just joking. 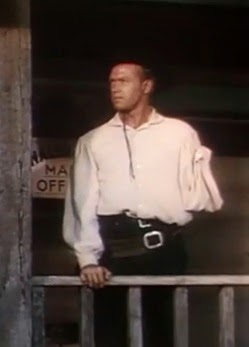 Perhaps if he'd strapped the arm behind him...
Victor Jory only comes fifth in the billing but he’s very good as Frank Walsh in this, more cowardly than as previous heavies, and hardly recognizable at first in his center-parted hair, mustache and owl specks. Once again he stirs up the Indians against Randy, just as he had done in Canadian Pacific but to equal effect (i.e. failure and his own death). 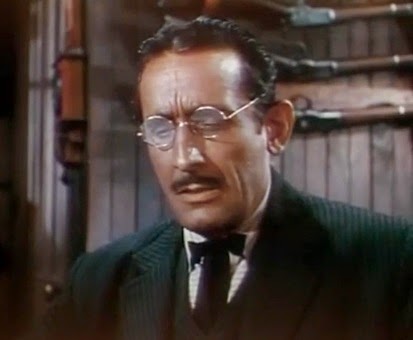 Cowardly Victor Jory, excellent as ever
The love interest is Karin Booth, rather good as Francie, the saloon owner who stands out against Walsh. She’s pretty and Francie clearly fancies Randy but she’s independent, resourceful and has grit. She seemed rather like a Luke Short heroine to me, if you know that writer. This was Ms. Booth’s first Western and she was only in five. Pity. She would have graced more. 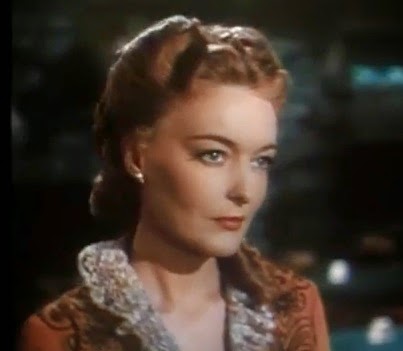 Karin Booth, very good
Douglas Kennedy is Jory’s henchman and Jim Davis is one of his thugs. Kennedy was, as you know, Steve Donovan, Western Marshal on TV but had been in Western movies since 1940 and had been with Scott the year before in Fighting Man of the Plains. As for Jim, well, we Westernistas all know him, of course, not for Dallas but for a host of oaters from Northwest Passage in 1942 to Comes a Horseman in 1978 via many RKO and Republic B-Westerns and countless TV episodes of Stories of the Century as Matt Clark, railroad detective - 223 Western appearances in all! He’s always convincing as tough Westerner. 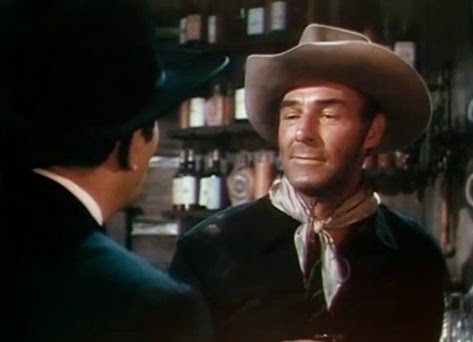 Happy-go-lucky, cynical, tough
Dale Robertson has a small part later in the movie as a foreman but has very little to say and is wasted. Lee Tung Foo is entertaining as the Chinese cook Ling who becomes a full partner. 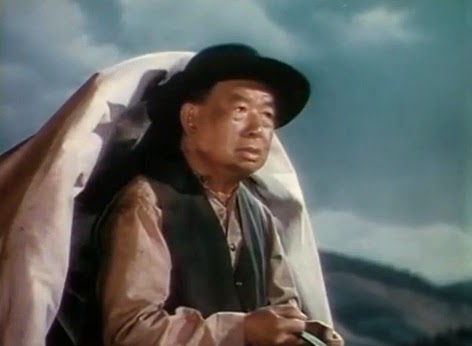 Mr. Ling
The Indians, though, as usual in B-Westerns of this time (Broken Arrow-style pro-Indian movies had yet to make their mark) are cyphers, stupid savages to be shot down. These days it does set your teeth on edge to see these portrayals. Fred Libby (TV heavy) plays their chief, White Buffalo. The capture of the heroes by Indians in the middle of the film and their subsequent escape with the aid of Hannibal, the kicking mule, is especially silly.


Marin was good at action scenes and this has plenty. It’s certainly a fun watch today but don’t expect great art. Variety called it “a scenic outdoor action feature that shapes up well” which just about sums it up. 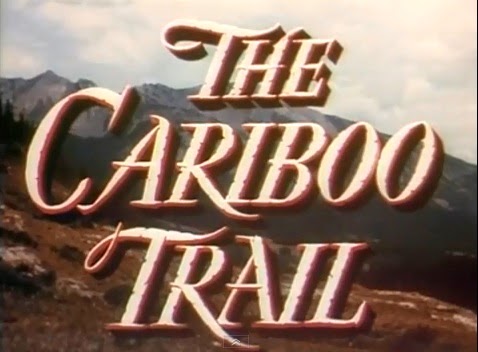