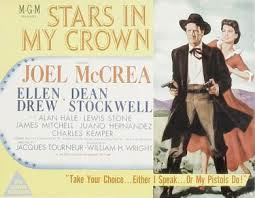 Not a Western though
Joel McCrea was so good in Westerns, proper Westerns. He had established a nation-building stage line in Wells Fargo and a railroad in Union Pacific; he had roamed the Plains as Buffalo Bill and The Virginian; in excellent smaller pictures he had run a ranch in Ramrod and robbed banks (politely) in both Four Faces West and Colorado Territory. That’s an impressive list. Stars in My Crown was really a poor choice of part, even if he was superb in it. 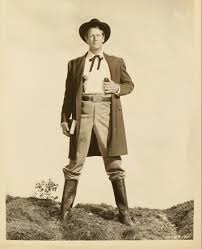 Towering
Paris-born Jacques Tourneur, who had gone to Hollywood with his father in 1913 aged 9, was a talented director. He made (classy) horror movies for RKO such as Cat People but graduated to various interesting projects in different genres. In the 1950s he was to direct McCrea in Wichita, a true Western and a fine picture, and four years before Stars he had directed Dana Andrews in the first-class Canyon Passage, an unusual but high-quality Western. I suppose he did OK with Stars but only if you like mawkishly sentimental pictures which paint a chocolate-box picture of a past that never was. 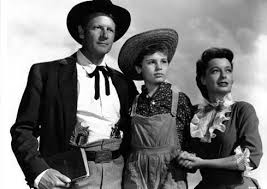 Wholesome family entertainment (aka treacle)
The producers of the DVD cover and poster could really be had up for an infringement of trade description. It shows a frock-coated McCrea in a smoky saloon with two drawn guns below the slogan Take your choice … Either I speak or my pistols do! This is a reference to the opening scene of the movie where McCrea’s ex-soldier Josiah Doziah Gray (stupid name) arrives in town after the Civil War (in cavalry breeches of a faded color to match his name) to set up as a preacher and gives his first sermon at pistol-point in a saloon. It is the only truly Western episode in the movie and it lasts thirty seconds. 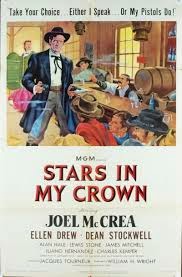 Misleading DVD cover
Otherwise, bucolic is the word, I’m afraid. We may be in a Western town in the 1870s but it’s just a wholesome 1950 black & white family film about a cute community with a parson and a doctor and how they cope with a typhoid epidemic. Think Driftwood or Intruder in the Dust. Not my cup of tea, though I do admit to falling victim to the sentiment here and there, dammit.

The hymn of the same name is used by Adolph Deutsch to bolster the community spirit that Josiah Doziah is trying to instil, and is soupy.

The film is more a series of episodic vignettes than an extended narrative.


Children loom large and the picture is aimed at them as well as their (undemanding) parents. The story is narrated (voiceover by Marshall Thompson who was in Anthony Mann’s Devil’s Doorway the same year) by a grown-up John Kenyon, played as a boy by then child star Dean Stockwell, 14. This was already the actor’s sixteenth movie so he was a hardened veteran. The following year he starred again with McCrea in an equally family film but much closer to a true Western, Cattle Drive. In Stars Dean is a likeable curly-headed village lad, an orphan adopted by the parson and his wife Harriet (Ellen Drew). He is pals with one of the blond brood of boisterous Isbell brothers, played by actors who look just like siblings but weren’t. One of them was a young James Arness. There are other kids. 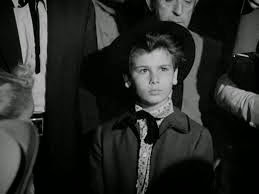 Stockwell
Pa Isbell, Jed, a wartime buddy of the parson’s, is well played by the excellent Alan Hale, hearty, brim-full of life. It’s a memorable act. There’s an old and dying doc (Lewis Stone) and his unpopular but able son who will take over (James Mitchell). The new young doc is an atheist (though of course the word itself could not be pronounced in a 1950s family film) who sees the parson as an intrusion and a nuisance but who comes round to respect and understanding of the clergyman. Where medical science has failed, prayer succeeds in saving the life of the school teacher (a teenage Amanda Blake, Miss Kitty of Gunsmoke). The young doc winds up in church on the arm of the schoolma’am. Audiences probably found these scenes heartwarming. I found them trite and sickly. 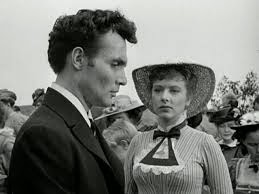 James Mitchell as the sour Doc and a teenage Miss Kitty as the schoolma'am
There’s one of those endearing ‘Negro’ old men, Uncle Famous, grizzled, decent, bible-readin’ and law-abidin’, the kind Hollywood loved (Juano Hernandez). 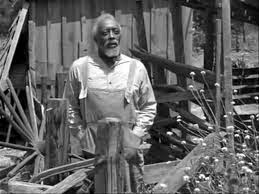 Uncle Famous (not Tom)
He befriends the boy John and the parson protects him from the unscrupulous greed of townsman Ed Begley, who is after the old man’s small plot of land, and Begley’s hooded henchmen, KKK kowards komplete with fiery kross and noose. Honest Jed and his sons arrive with guns to save the old fellow but Parson McCrea doesn’t fight the white-trash thugs; he shames them into submission. 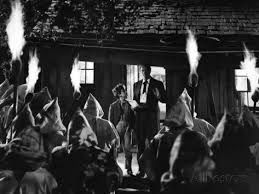 The kowards of the KKK
At least the picture is decently anti-racist and may have had a good influence on its young audience.
Arthur Hunnicutt plays the village simpleton. Always great to see Arthur. The man is named Chloroform Wiggins because his mother hadn’t heard of chloroform when he was born but was so impressed by its efficacy that she named the newborn babe after it. Fair enough.


One good thing: you know how fond I am of nineteenth-century gadgets in Westerns. Well, Ellen Drew’s apple-peeler is a wiz (wish I had one), as is the fan gizmo she has to keep flies off the cake (groovy) and she also has a natty device for winding wool (I am less covetous). 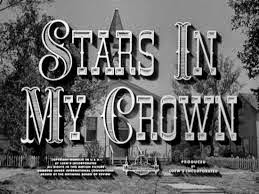