Errol Flynn first ventured hesitantly into Westerns (he wasn’t at all sure they were right for him) in 1939 with Warners’ blockbuster Dodge City, directed by Michael Curtiz. It was a huge hit and was closely followed by Virginia City and Santa Fe Trail in 1940. But big, brash and fun as these pictures were, Michael Curtiz didn’t really ‘get’ Westerns and it was in 1941 that Errol Flynn reached greatness in the saddle with They Died With Their Boots On, a Custer picture. And the reason for that? Raoul Walsh.

Raoul Walsh ‘got’ Westerns big time. He had grown up with them and understood their spirit and essence. He had acted in and/or directed eight silent Westerns 1914 – 17. He was Second Unit Director on The Life of General Villa in 1914, playing Pancho as a young man, and was co-director on another Pancho Villa flick, the one which included actual footage of Villa battle scenes. He was assistant director on DW Griffiths’s The Birth of a Nation in 1915 and played John Wilkes Booth in it. In 1928 he was to have appeared as The Cisco Kid but a jackrabbit through the windshield cost him the part and an eye. In 1930 he directed Fox’s 70 mm widescreen wagon-train epic The Big Trail, with his young discovery John Wayne in the lead. Raoul Walsh was a man with the West in his blood.


In 1940 Walsh directed Wayne again in the quality picture Dark Command and in 1941 came the rip-roaring They Died With Their Boots On, a classic Raoul Walsh picture. He really took to Errol Flynn (and Olivia De Havilland) and in 1945 came San Antonio, in ’48 Silver River and in ’50 Montana, Flynn’s last of seven Westerns (directed by Ray Enright). Walsh and Flynn were made for each other and together they made magic, though Walsh gradually tired of Flynn’s drinking. Silver River was their last collaboration. 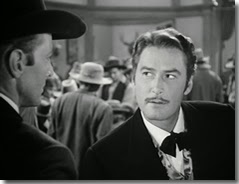 The picture was in black & white, surprising perhaps for a big-budget Warners effort (Dodge City had been in color nearly ten years before) but Sidney Hickox did the photography of some very nice Inyo National Forest locations and the picture looks very attractive. This was Sid’s fourth Western and he had done Cheyenne (the movie) for Walsh the year before – with a lead role first destined for Flynn but not eventually to be. Later Hickox photographed some beautiful looking Westerns, including Colorado Territory, Along The Great Divide, Distant Drums and Fort Worth. He had a great eye. There are some especially fine shots of a wagon train in Silver River, accompanied by dialogue:
- Certainly nice country, Charlie.
- Yep, and plenty of it.
There’s a good score by Max Steiner too.


Olivia De Havilland’s first starring role had been with Errol Flynn and together they made eight films, becoming a stellar (acting) couple. From a Western point of view she was female lead in Dodge City, Santa Fe Trail and They Died With Their Boots On, all with Flynn. But then came the long and dramatic contractual and legal battle with Warners (which she won) and in 1948 she was not available for Warners’ Silver River. Instead, Ann Sheridan, who had been second lead in Dodge City (already her sixth Western), and who had starred with Flynn in the war film Edge of Darkness in 1943, got the lead part. She is terrifically good in Silver River, playing Mrs. Moore, the tough wife of a weaker man, Stanley Moore (Bruce Bennett) but she then falls for the dashing Flynn character. Sheridan makes no attempt to be De Havilland and if anything reminds us more of Lauren Bacall. It’s an excellent performance. 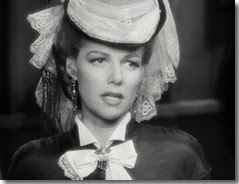 We start at Gettysburg with typical Walsh action when an unshaven therefore tough Union pay corps Captain McComb (Flynn) decides on his own initiative to burn a million paper dollars rather than let them fall into the hands of a pursuing JEB Stuart (we remember that Flynn himself had been Stuart in Santa Fe Trail eight years before). For this act McComb is cashiered and becomes hard ‘n’ cynical in civilian life, determined to make his fortune no matter how. There were similarities with the character Flynn played, again for Walsh, in Uncertain Glory four years before. It then becomes a story of the rise and fall of a silver baron. At the height of his hubris he lives in a marble castle like some Western Citizen Kane but his career and wealth all come crashing down. 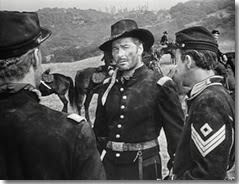 Third-billed Thomas Mitchell, rapidly becoming typecast as a drunk in Westerns (Doc Boone in Stagecoach, Buntline in Buffalo Bill, the sheriff in Destry, all alcoholics) is nevertheless very entertaining as the down-and-out lawyer John Plato Beck. McComb takes him under his wing and he becomes a key character in the rise of McComb’s silver empire, but then gets religion and turns against his ruthless patron. 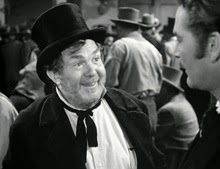 A theme of David and Bathsheba runs through the movie, even if the silver ‘king’ in the shape of Flynn doesn’t see Bathsheba/Sheridan bathing, nor does he get her pregnant, nor does he really send her husband Uriah/Bennett to his death – indeed , he rides out in a failed attempt to rescue him from the Indians. So the whole David & Bathsheba image seems distinctly threadbare but still Mitchell’s character Plato Beck drones on about it endlessly and the dialogue makes great and slightly tiresome play of it.


Despite this, the writing is rather good in Silver River. The screenplay was by Stephen Longstreet and Harriet Frank Jr. Longstreet had met Picasso, Matisse, James Joyce and Gertrude Stein in Paris, had been to Harvard and graduated from New York School of Fine and Applied Art, and wrote books on jazz, so he was no mug. He’d worked on Barbary Coast before this. This was Harriet Frank’s first Western but she later worked on quality oaters such as Ten Wanted Men, Hombre, The Cowboys and The Spikes Gang. The screenplay of Silver River contains references to Julius Caesar and some interesting lines such as “A man is only lonely when he depends on other people.” This is an interesting addition to the philosophy of the Western loner.


The excellently-named heavy Banjo Sweeney is played by good old Barton MacLane. The snarling henchman specialist, MacLane was enjoyable in a wealth of Westerns. He was in 97, from To The Last Man in 1933 to Arizona Bushwhackers in 1968. I always like to see Barton. 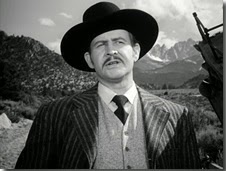 Tom D’Andrea is entertaining as Flynn’s salt-of-the-earth sidekick Pistol Porter, and either his stuntman double looked exactly like him or Tom was very athletic. The shot where he leaps from his horse to the seat of a careering wagon is damned impressive. It was D’Andrea’s only Western and I wish he’d been in more.


Bruce Bennett is bland as Sheridan’s husband but he’s supposed to be. Monte Blue is there as Buck and Joseph Crehan is President Grant again – he played Grant nine times!


There are many big Walshian crowd scenes with swirling action and hosts of extras. In this way at least he was like Curtiz. The shots certainly give the movie energy and pzazz. The saloon scenes are also great. 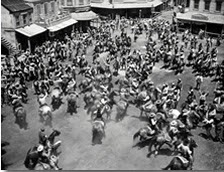 The movie was not a big hit, maybe because of the lack of De Havilland, maybe because Flynn’s character is basically pretty nasty, but I like it. It has all that Flynn/Walsh energy and drive, it’s full of action, well written and sticks in the memory. It wasn’t Walsh’s best Western, nor Flynn’s, and at just under two hours it’s probably too long, but it is a whole lot of fun. 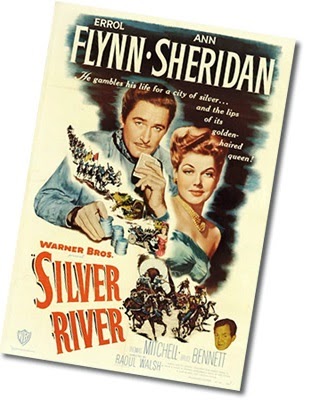