A whitewash in color

The first ‘big’, adult or ‘A’ Western treatment of Jesse James was Fox’s Technicolor extravaganza in 1939, starring heart-throb Tyrone Power as Jesse and Henry Fonda as brother Frank. It was Power’s first Western (if you discount a bit part in Northern Frontier, a 1935 Mountie picture) and also Fonda’s (if you discount Drums Along the Mohawk the same year, at best a semi-Western). Big studio stars didn’t do Westerns in the 30s. The genre was reserved for kids and old-timers. 1939 changed all that, though, with big-studio, big-budget adult ‘A’ Westerns, often in color, with glossy stars, suddenly making money. Stagecoach, of course, but also Warners' Dodge City, Universal's Destry Rides Again, Paramount's Union Pacific and, yes, Fox's Jesse James. Jesse James was a huge hit, the fourth highest grossing picture of ’39 after Gone With the Wind, The Wizard of Oz and The Hunchback of Notre Dame. 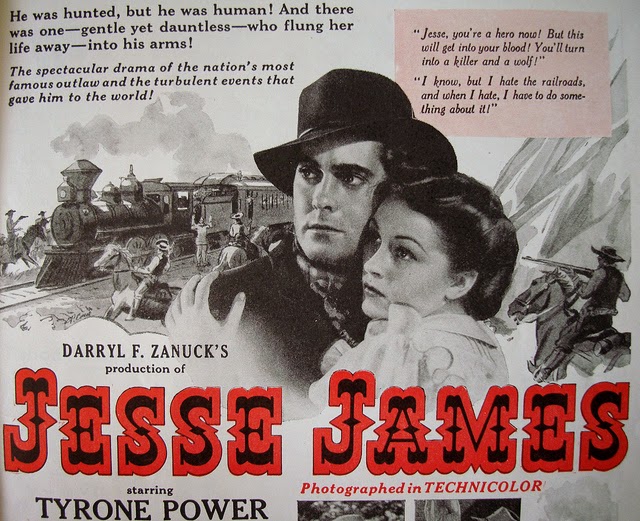 Rather a wordy poster. Still, it tells you what you want to know, I guess.
Sultry Tyrone Power was a hot property in ’39. He’d been Alexander in Alexander’s Ragtime Band, Count Axel in Marie Antoinette and Ferdinand de Lesseps in Suez. He specialized in dashing, faintly exotic lovers and/or swashbucklers. Not the obvious choice for a Western. Fonda had been grave and noble as Young Mr. Lincoln and Alexander Graham Bell. Both stars were very well known and handsome enough to draw the ladies into the more expensive seats – ladies who had never previously been assiduous in attendance at cowboy matinées.

They cast Nancy Kelly as female lead - hardly the glamorous screen idol but attractive and quite well known in minor parts. They’d have to rewrite history a bit to make a good part for her but that was OK. They were used to that. Nunnally Johnson was an experienced writer of screenplays, although again it was his first Western. He went on to work on The Gunfighter and Flaming Star, both seriously good pictures, so he obviously had the knack. And anyway there was input from other writers (as there usually was). Gene Fowler had written The Call of the Wild and The Cowboy and the Lady. 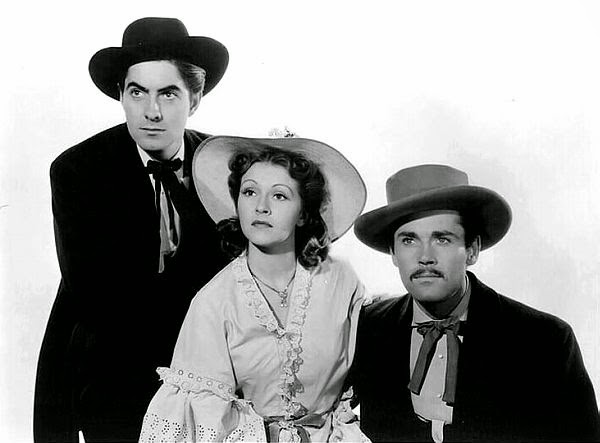 Jesse, Zee and Frank
The story they cooked up was a complete whitewash, of course. It bore no relation to the historical JW James. The Civil War isn’t even mentioned. Jesse is an innocent farm boy until the unscrupulous railroad, in the shape of Brian Donlevy, tries to run Jesse’s dear, saintly mother Ma James (‘saintly’, my foot) off their ranch, and then, boy, watch out. But we expect this. You couldn’t sell a true life of the murderous thief Jesse James, not then. The public would never stand it. But the script was fast-paced and gripping.

Fox engaged a classy director (Henry King was to go on to make The Gunfighter and The Bravados, both with Gregory Peck). Tyrone Power was a dashing, if very Spanish-looking, Jesse. Henry Fonda was, of course, very fine as Frank and he gave the movie weight and critical acclaim. This film was in fact a prototype of Fonda's future Western roles: quiet class, nuanced power. He is superb, far better than the part or the script deserved. 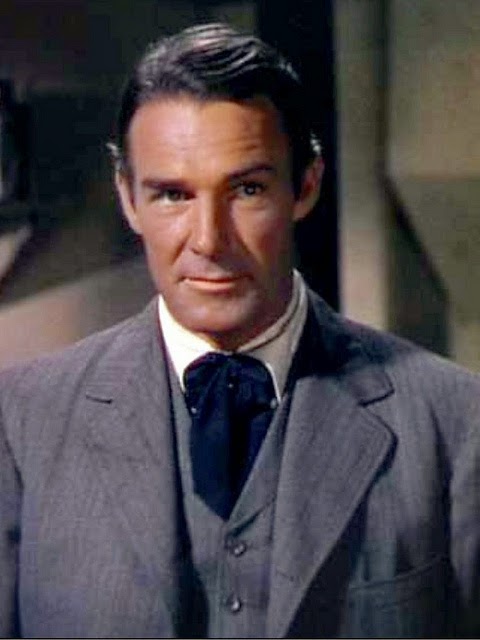 Well-known cowboy star Randolph Scott was written in as the family friend who stands by Jesse but falls for his wife. He did exactly the same again only a year later for other, related, outlaws, the Daltons, falling for Broderick Crawford’s girl in Universal’s When The Daltons Rode. He got about. Scott is very good as US marshal, underplaying as usual. He arrives about twenty minutes in. He doesn’t even mount a horse or fire a gun, just smiles and is nice to the James family. He’s actually in love with Zee, you can tell – though he never says so. It’s a bit like Shane and Marian. Randy was destined to play second lead in A-pictures or first lead in B ones but he was always great.

John Carradine, of that noble Western dynasty, is excellently villainous as the coward Robert Ford, shooting Jesse James in the back as Jesse stands on a chair adjusting a picture. Carradine told an amusing story of how he was in front of a theater when the picture was showing and “a little kid said, ‘Did you shoot Jesse?’ and I said, ‘Yes’. And the son of a bitch kicked me in the shin!” Many comparisons have been made between Robert Ford and Judas, although the comparers seem thereby to assume that the murderous thug Jesse was in fact Jesus. Jesus, Jesse, same number of letters, begin with J. (So does Judas, come to that). 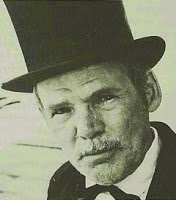 Henry Hull overacts as usual in his comic turn as a dogmatic newspaper editor (he was to make quite a thing of it). Hull did a few Westerns in which he was restrained but in most he hammed it up. Still, he brought some comic relief.

Donald is much less Meek than he was in Stagecoach the same year as the whiskey drummer. Here he is ferocious, in a timid way of course, as the nasty, vertically-challenged railroad chief. He came back in the sequel and did another couple of Westerns. He is always fun to watch.

La Kelly was pretty dire, though, as Zee. She is a pain most of the time, either being soppy and wet when Jesse is around or whingeing and whining when he isn’t. The kid, Jesse Jr., was a mistake too. Never mind.

The other outlaws are not drawn strongly. They remain in the background and no Youngers are even mentioned. It was a bit like the Wyatt Earp films: you don’t want strong brother Earps who might upstage your star Wyatt. Better to have shadowy unknowns.

There’s a shocking and shameful stunt where a horse was killed jumping off a cliff. 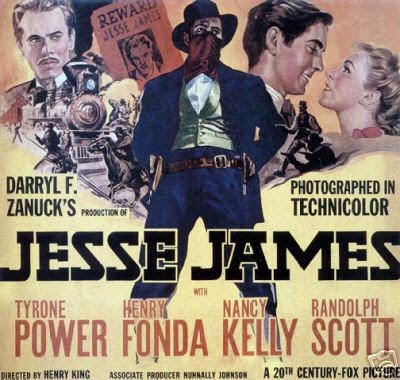 Jesse looks pretty good in this one
The music is bold and martial. The photography, by George Barnes, is rather good and it was filmed in true Missouri locations, very nice in a green and rural way. In fact the locations were about the only authentic element of the film. 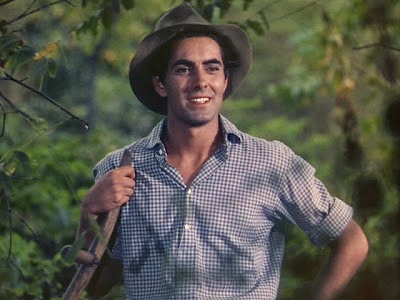 It was such a box-office smash that although Jesse had been killed, a sequel was inevitable. Fonda could still reprise his Frank act and in fact in its way The Return of Frank James, directed the following year by the great Fritz Lang, was a better movie.

But Jesse James is a fun picture that gallops right along and though wildly unauthentic is an essential part of the Jesse canon. A must-see, boys and girls.