Guns have always been essential to the Western, an integral part of the whole ethos. The word gun in one form or another appears in very many Western titles, such as Gun Battle at Monterey, Gunbelt, Gun Brothers, Gun Fever, Gunfight, A Gunfight, Gunfight at Comanche Creek, Gunfight at Dodge City, Gunfight at the OK Corral - gunfights, in fact, all over the place, The Gunfighter, Gunfighters, Gunfighters of Abilene, Gunfighters of Casa Grande, Gunfire, Gun for a Coward, Gun Fury, Gun Glory, The Gun Hawk, Gunman’s Walk, Gunmen from Laredo, Gunpoint, The Gun Riders, The Long Guns, Guns A’Blazin’, Guns for San Sebastian, Gunsight Ridge, Gunslinger, Gunsmoke, Have Gun Will Travel, Guns of a Stranger, Guns of the Magnificent Seven (naff sequel), Guns of Wyoming, Guns of Honor, The Gun that Won the West, Young Guns and Young Guns II, to name but a lot. 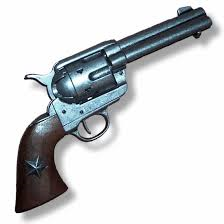 Colt .45
And it’s not surprising also that Western movies were made about specific guns: the gun that won the West in the list above was the Springfield rifle. Gary Cooper knew all about the Springfield Rifle too, just as James Stewart knew the Winchester ’73 and Randolph Scott the Colt .45.

The idea of Colt .45, Randolph Scott's first film under his new Warners contract, is that new revolving pistols come on the market but must not under any circumstances fall into the hands of the bad guys, only the forces of law ‘n’ order. It’s a fairly preposterous premise as the six-shooters were freely available by mail order from Colt's Patent Fire-Arms Manufacturing Company in Hartford, Conn. 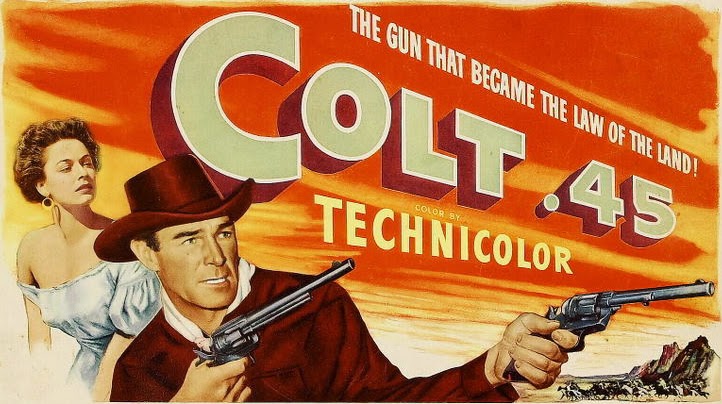 Jejune
But bad guy Jason Brett (Zachary Scott) steals a brace of salesman Steve Farrell’s .45s and proceeds to rob and kill with them, the cad. Farrell (Randy) sets off on a quest to recover them, as if this will restore peace and harmony to the West. It's all pretty silly. 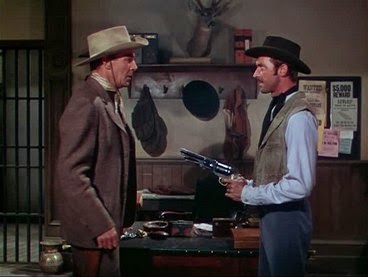 Badman Brett steals those .45s
The exact date is not mentioned in the movie, though it is after the Mexican War (1846 – 48) because the hero Farrell tells how he fought in that war and would have been killed had it not been for the revolving pistols. Of course the costumes and accoutrements are all generic 1870/80s, as they were in most B-Westerns, but the story appears from the plot and dialogue to be set before the Civil War, let’s say 1850 or 1851. In fact there was little new about revolvers per se then. Samuel Colt was granted the patent on February 25th, 1836 for the .28, then .36 Colt Paterson. It was not even the first: there had been, for example, Collier’s revolving flintlock.

The Walker Colt
In 1844 Capt. Samuel Walker of the Texas Rangers ordered a thousand Colt’s revolvers. They were six-, as opposed to five-shooters, and .44 caliber. But the gun was a monster weighing four and a half pounds (Sam Colt remarked, “It would take a Texan to shoot it”) and was really a horse pistol. The first real handgun revolver was the 1851 Colt Navy, the pistol favored by Wild Bill Hickok and Jesse James. This gun used cartridges made of nitrated paper, a pre-measured black powder charge, and either a round lead ball or conical bullet. Perhaps this is the one Randy would have been selling? It was a six-shooter. But no, because it was .36 caliber. The famous Colt .45 Peacemaker wasn’t introduced until 1873. Oh well, we don’t watch Randolph Scott B-Westerns for historical accuracy, do we.


Anyway, Randy searches the West and finally tracks down the evil Brett and his gang. One of Brett’s henchmen is Lloyd Bridges, so that’s good. Brett has evolved a vile plan to rob the stage (using his stolen .45s) with his gang dressed up as Indians, and blame it on the redskins. But Randy befriends the redmen, saving the life of their chief, Walking Bear (Chief Thundercloud), and together he, the Indians (of unspecified tribe) and beautiful Ruth Roman foil the fiendish plot. 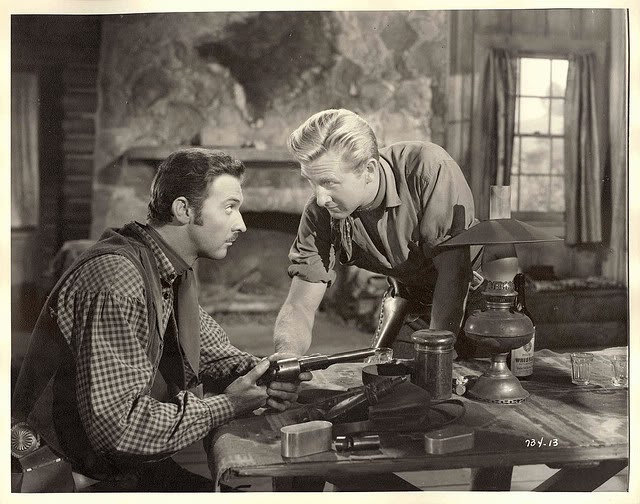 Evil Scott caresses his .45s, blond henchman Bridges covets
Probably the best thing about the movie, which is really rather juvenile all round, is that the sheriff (who seems decent but soon turns out to be in the pay of badman Brett) is played by third-billed Alan Hale. You probably know Messrs. Alan Hale, Sr. and Jr. This is daddy (1892 – 1950), who was a Warners character actor much in demand. He was a buddy of Errol Flynn (and was Little John to Flynn’s Robin Hood, as well as appearing in 12 other Errol Flynn movies). He was in 17 Westerns, from the early silent days (he was in The Covered Wagon), and including Dodge City, Virginia City and Santa Fe Trail, obviously (they were Errol Flynn oaters), as well as South of St Louis and Stars in My Crown with Joel McCrea. Colt .45 was his last film. He was always big, bluff, hearty and, er, hale. He doesn’t quite suit the crooked sheriff – Ray Teal would have been better. But it’s great to see him. He comes to a rather sticky end, shall we say. 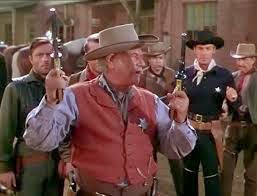 Alan Hale, hearty as ever
I must say, Zach Scott (no relation) did the sneering sadist awfully well. That mustache helped. He only did seven Westerns (and a couple of Rawhide episodes), which was rather a pity. He could usefully have sneered his way round a few more. I liked him as Charlie Burns in South of St Louis, slowly descending from good-guy status into derringer-pulling city slicker. He actually led in a 1955 B based on a Louis L’Amour story, Treasure of Ruby Hills, but he was the goody there and therefore miscast. In Colt .45, though, the villain is very one-dimensional. Variety said, "...the histrionic antics of Zachary Scott are ludicrous in the extreme" but that does seem a criticism too far. Still, the movie needed one of those attractive badmen that Randy played opposite later in the 1950s in those Ranown/Boetticher movies. 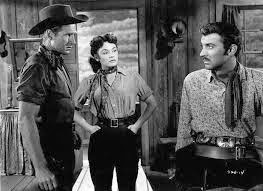 Bridges, Roman, Z Scott, in it together
Ruth Roman was fabulous, Ava Gardner-classy in The Far Country and beautiful too opposite Gary Cooper in Dallas. She was in twelve Westerns (if you count the TV The Sacketts) and quite a few TV shows. But I don’t think she ever got the chance to shine in a top-class Western film apart from The Far Country. Pity. In Colt .45 her part is so crudely written she couldn’t do much anyway. Except look pretty. 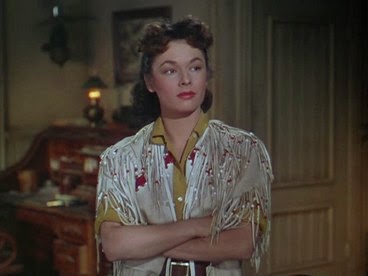 Ruth Roman, classy
The movie was in color. Warners were obviously splashing out. It was quite nicely photographed by Wilfred M Cline (silents, B-Westerns and TV shows; probably his biggest Western was The Indian Fighter in 1955), with some pleasant Vasquez Rocks Californian locations, though most of the movie is shot on a sound set, either in town or in the Indian camp.


The director was Edwin L Marin. Marin worked for pretty well every studio at one time or another and had been in charge of second features at MGM but was with Warners briefly 1950 – 51. He directed seven Randolph Scott Westerns (this was the fourth of them). He was alright but no one would claim that the movies he did were Randy’s best. He was good at action scenes and Colt .45 certainly nips right along but he was rather plodding on stories and plot development. The characters of the people in the story don't develop - indeed, are hardly portrayed at all. The writing, by Thomas W Blackburn, with many additions/changes from anonymous Warner hacks, didn’t help. This was Blackburn’s first Western and a bit on the clumsy side. 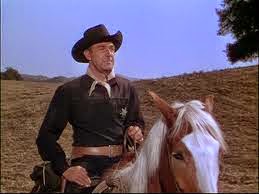 Randy rides alone (all in black)
Although a bit of a plodder, the film was a commercial success, perhaps because of the mystique of the Colt .45, perhaps for the picture’s action and jejune plot. NRA types still like it, I believe. Maybe they like the opening screen, which reads: A gun, like any other source of power, is a force for either good or evil, being neither in itself, but dependent upon those who possess it.


When the TV series Colt .45 came on in October 1957, the movie was renamed Thundercloud (oddly) to avoid confusion, I guess. The series was one of those many ABC/WB ones, like Bronco, Cheyenne, Lawman, Maverick and Sugarfoot. It was loosely based on the film and had (at first) Wayde Preston in the Randolph Scottish part as Christopher Colt, though he was a government agent as well as salesman for the arms company. 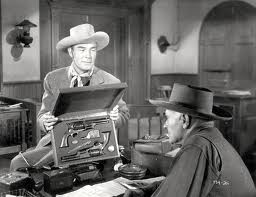 Good salesman. Sheriff drools.
There were 133 Westerns in 1950 (oh, happy year) including great pictures such as Rio Grande, Winchester ’73 (also about a man getting revenge for a stolen gun) and Broken Arrow. I’m afraid Colt .45 doesn’t come anywhere near those. Still, let us not, dear e-readers, be dismissive. It’s a Randolph Scott Western in color, after all, and ergo a whole lotta fun. Actually, though, if you want a color Randy B-Western of 1950, watch the Gordon Douglas-directed The Nevadan (Columbia). It’s fab and makes Colt .45 look like a kids’ matinée. 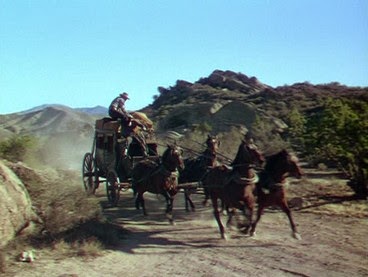