There have been several films showing the Oklahoma Territory land rush of April 22nd 1889 and very impressive they are too, as thousands of extras in every kind of conveyance (there’s always a penny-farthing bicycle to emphasize the variety) hurtle off at the sound of the military gun in a frenzy of state-sponsored greed to stake a claim to free land. It happened again on 16th September 1893 when the Cherokee Strip was opened up for settlement. The fact that these lands had previously been assigned in perpetuity to Indian tribes was conveniently forgotten. Sometimes it was not even mentioned in the stories these films told, which concentrated on self-made Americans in the making. William S Hart’s silent Tumbleweeds in 1925 was an epic example and, by the way, a must-see for all true Western fans.

But Edna Ferber’s novel Cimarron, which was twice filmed (1931 and 1960), for all its soapy characteristics, did at least discuss the rights of the dispossessed Osage and Cherokee. Ferber (1885 – 1968) was born of Jewish storekeeper parents in Kalamazoo, Michigan. 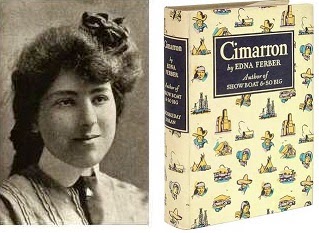 Her So Big won a Pulitzer Prize in 1924 and Show Boat came out two years later. Cimarron was published in 1929. Later, of course, she wrote Saratoga Trunk and Giant. Her books usually contained a strong female protagonist and characters who suffered discrimination because of their race, gender, color or creed.


The film was a massive project. RKO was failing in the throes of the Depression, yet invested nearly $1.5m in the film. Wikipedia tells us:


Filming began in the summer of 1930 at Jasmin Quinn Ranch outside of Los Angeles, California, where the exciting land rush scenes were shot. More than twenty-eight cameramen, and numerous camera assistants and photographers were used to capture thrilling scenes of more than 5,000 costumed extras, covered wagons, buckboards, surreys, and bicyclist as they raced across grassy hills and prairie to stake their claim. Cinematographer Edward Cronjager carefully planned out every take … in accordance with Ferber's descriptions. In order to film key scenes for this mammoth production, RKO purchased 89 acres in Encino where construction of Art Director Max Ree's Oscar winning design of a complete western town and a three block modern main street were built to represent the Oklahoma fictional boomtown of Osage.


It starred Irene Dunne, in only her second film. Later she became a great figure of the film world, known as The First Lady of Hollywood. As far as Westerns are concerned, in 1937 she was in the musical High, Wide and Handsome with Randolph Scott and Dorothy Lamour but that was all. In Cimarron she plays the rather bourgeoise wife of a wild roamer who is left to run the business and bring up the children on her own and who gradually grows to become a successful, independent, thoughtful woman who learns tolerance. The film takes her from 1889 to 1929 so acting skills (and good make-up) were required as she ‘aged’. She was nominated for an Oscar for the part. 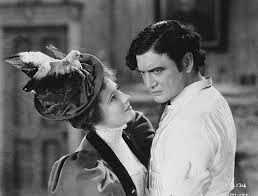 The husband, with the rather silly name of Yancey Cravat, was played by RKO’s leading man Richard Dix. It is perhaps unfair to accuse Dix of being a ham. In the early talkies most actors overdid it by modern standards. Still, there is little subtlety in his portrayal. He was a big man at least and full of vigor and that does add a bit of zip to the movie but he looks faintly ridiculous in frock coat and his over-fancy Tom Mix-style double gunbelt with tie-down holsters. And boy, was his hair stupid. I think it's modeled on Ms. Ferber's. In the early 1920s Dix had been in the Paramount silent versions of Zane Grey stories (which were later remade as talkies with Randolph Scott). He joined RKO in 1929. Cimarron was his sixth Western of 19. He was probably most famous for two 1942 pictures, American Empire and Tombstone, The Town Too Tough To Die, in the second of which he played Wyatt Earp, but not very convincingly, I’m afraid. 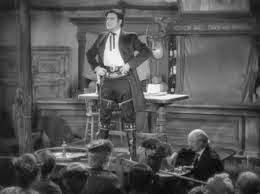 Other actors include Estelle Taylor as Dixie Lee, the fallen woman whom the ‘respectable’ folk want to run out of town but who is defended by Yancey in an overdone and rather tear-jerking court scene; William Collier Jr., who plays the outlaw The Kid - as often happened with ‘kid’ parts, he was pushing 30 and barely credible in the role; Edna May Oliver in a comic part as the prudish dame who claims, often, to be descended from one of the signers of the Declaration of Independence (in fact Oliver was really a descendant of the 6th American president John Quincy Adams) – she was later to be memorable in John Ford’s Drums Along the Mohawk; 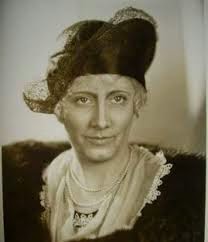 Roscoe Ates as the stuttering printer Jesse; and George E Stone, rather moving (and understated by 1931 standards) as the Jewish storekeeper Sol, with whom, doubtless, Edna Ferber identified. I also thought the villain Lon Yountis (Stanley Fields) very villainous. There are a couple of good close-ups of his dark, mustachioed unshaven face as he glares menacingly at Yancey. Before Yancey shoots him at a church service, that is. 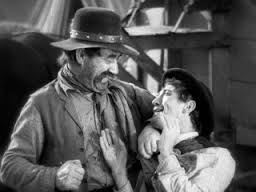 The director (strangely uncredited) was Wesley Ruggles, who spent the 1930s at RKO and Paramount and made some successful movies. He only did two Westerns, though, this one and the entertaining Arizona (1940) with a brilliant Jean Arthur and a young William Holden. The direction of Cimarron is sometimes heavy-handed but no more than usual for the period.


There are moments which seem pretty corny to us now, or even embarrassing, such as the scenes with the Negro servant boy Isaiah (Eugene Jackson, Pineapple in the Our Gang series), whose death in the crossfire of The Kid’s bank raid is pure Victorian melodrama. 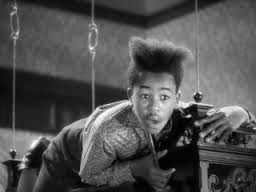 One good thing: you should see the Simplex cash register in the saloon! You know how I love nineteenth-century gadgets in Westerns.


The movie was a critical success, being nominated for seven Oscars, no less, and winning three of them (William LeBaron for the production, Howard Estabrook for the adaptation of the Ferber novel and Max Rée for the art direction). It was the first, and for many years (until Dances With Wolves and Unforgiven) the only Western to win Oscars. But it didn’t repay the enormous investment, at least at first. It was re-released, with more hullabaloo, in 1935 and that helped recoup the losses. 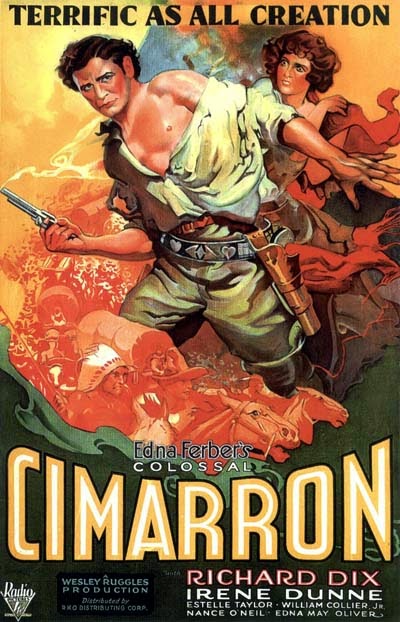 In 1960 the film was remade in color and was directed by Anthony Mann, starred the great Glenn Ford and was photographed by Robert Surtees, so should have been truly great. But it wasn’t. You’re better off with the 1931 version, really, for all its corniness. It’s visually seriously impressive - DP Edward Cronjager really was a genius -and despite its two-hour-plus runtime doesn’t drag. Give it a go, e-pards! 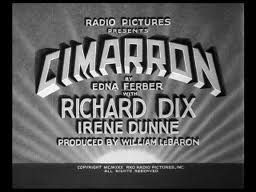