Canadian Pacific is certainly not one of Randolph Scott’s better Westerns. In fact it is one of his weakest. In his very good book The Films of Randolph Scott (McFarland & Company, 2004) Robert Nott is particularly down on it and goes so far as to call it “abysmal”. Nott says, “It may not be Scott’s overall worst film, but I rate it as his overall worst Western.” He adds, “Randolph Scott or no Randolph Scott, it stinks.” Myself, I think that’s going a bit far. It does have action, color, and Victor Jory as villain, after all. But I do admit, it’s pretty weak generally. 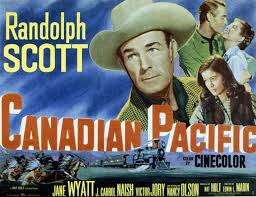 Not very good
It’s one of those Union Pacificky nation-building railroad pictures. Scott did something similar in Santa Fe and Carson City. It starts with politicians in Ottowa afraid that if no railroad is built over the Canadian Rockies, British Columbia might secede, obviously a fate worse than death. But never fear, Canadian Pacific boss Cornelius Van Horne (Robert Barrat, rather good) assures the parliamentary committee that his man Tom Andrews (Scott) is on the job, and if anyone can find a pass over the mountain range, he can. And, then, as expected, the film goes all fuzzy and we morph to the (Canadian) Western frontier and there’s surveyor Randy, duly gazing at majestic peaks and mapping a route.


Of course, movies like these beg the question, Are they Westerns at all? What was Alan Ladd doing up in Saskatchewan or Tyrone Power, also in a red tunic, in Pony Soldier? Or Texas Ranger Gary Cooper in North West Mounted Police, come to that. Randy got up there quite often (Canadian Pacific, Susannah of the Mounties, The Cariboo Trail). Still, Canadian Pacific is a Western, alright, with Indians attacking a train, bad guys with six-shooters and all the trappings. And we could argue, I suppose, that especially before the Oregon boundary dispute was settled in 1846, there was little difference between US and British regions of north-west North America. And let’s not forget what a fine Western The Far Country was. There. Your doubts disposed of.


Canadian Pacific is very attractive visually. It was photographed by Fred Jackman Jr. (201 silent, B-movie and TV Westerns including six Randolph Scott oaters) up in the Banff National Park and round Lake Louise in Alberta, even if a lot of scenes are shot on sound stages and the lovely Cinecolor sometimes gives way, perhaps with age (in my print anyway) to sepia browns.


There’s the conventional three-way love affair, with Randy at first gung-ho in love with French-Canadian Cecile Gautier (Nancy Olson, 20, in her début; next stop was Sunset Boulevard) and all ready to set off on a The Virginian-style idyllic honeymoon camped by a lake, 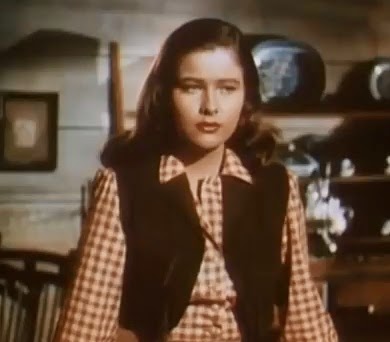 but then gradually falling for sophisticated Dr. Edith Cabot (Jane Wyatt), the railroad doc. With whom will Randy finally tie the knot? The outcome is undecided until the final moments of the last reel. 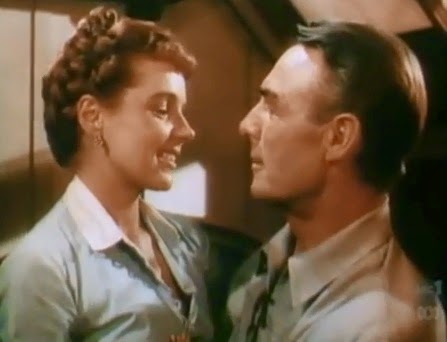 Falls for educated Doc
Scott is a funny kind of surveyor, with his two-gun Tex look and willingness to shoot barmen and punch out heavies. Still, the public expected that from Randy. Sadly, his part gave him few extended speeches and although this speeds up the action, it doesn’t let his character develop at all, so we don’t really know who he is or what he’s like. That’s the fault of poor direction (Edwin L Marin again) and writing (a Jack De Witt story and screenplay with input from Kenneth Gamet). 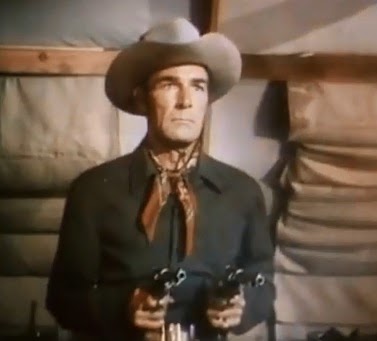 Strange kind of surveyor
Scott was friends with Canadian writer John Rhodes Sturdy (there’s a British Empire-building name for you) who was the technical advisor on the movie, and in fact used him again the following year when Sturdy provided the story for another Marin/Scott 'Canadian Western’, Cariboo Trail. 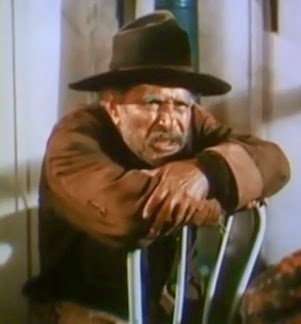 Naish as cranky old-timer
We have J Carrol Naish miscast in a Gabby Hayes-style cranky old-timer part as Dynamite Dawson, the explosives expert. He looks the part alright, in his whiskers and costume, but never quite gets the comic-relief aspect. And he is expected to do absurd things, such as ride a wagon full of dynamite helter-skelter through the camp just to get Randy’s attention. When he escapes from the besieged train to ride off to get help, there’s an episode as stupid as it is in bad taste, when he hands out dynamite sticks to the Indians who have waylaid him and lights them up as cigars, before sneaking off and laughing at the off-screen explosion. 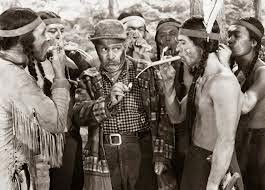 Unfunny and insulting scene
Talking of ridiculous episodes, while Randy is piling up five cases of dynamite, Victor Jory’s henchman (Don Haggerty) shoots the bottom one with a rifle and the whole lot goes up. Boom. That’s the end of Randy. Nope, in the next scene he is being saved by Doc Cabot and in no time he is sitting up and quipping with only a bandaged head. 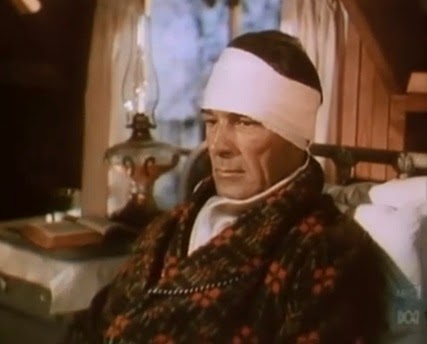 Five cases of dynamite? It's just a scratch.
Jory was always so good as villain. He didn’t even have to open his mouth. He just looked villainous. In Canadian Pacific he is one of those melodrama badmen and his part is pretty poor. Actually, when, for his own greedy and evil ends, he is stirring up the Indians to take the warpath, he unconsciously talks quite a lot of sense when describing how the railroad will change their way of life for the worse. During the final-reel shoot-out when his sixgun is empty of course he throws it away in annoyance, you know how they do. Either the director told him to do that or didn’t tell him not to; either way it’s poor. 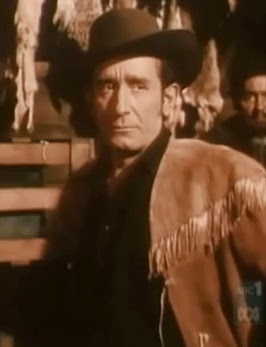 Villainous Jory
There is one vaguely thoughtful exchange which reminds us of Amy talking to Kane in High Noon (1952) and Marian and Shane’s conversation in Shane (1953).


Edith: My father was killed, Mr. Andrews, because he tried to use a gun against a man instead of reasoning with him. If he hadn’t worn a gun, he’d still be alive.
Tom: I’m sorry about your father. I’ve learned, though, that in this country if I draw faster, I keep living.


This gun-control/pacifism theme could have been interesting if developed but unfortunately Scott straps on and hangs up his guns every ten minutes so that we never get a sense of who is winning the argument. Anyway, we know perfectly well that it’s all going to end in a blaze of gunfire and the final message of the movie is pretty NRA-friendly. 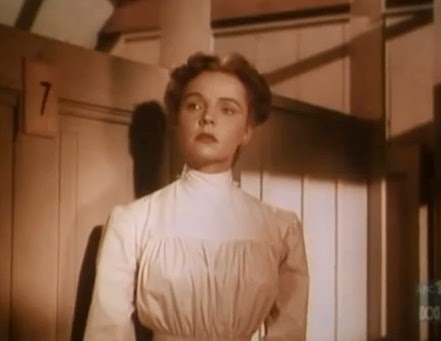 She's against guns
In fact the final-reel The Lady Vanishes-style attack on the train is rather good. Guess who sneaks out of the train and confronts the villain up in the woods.


The unspecified-tribe Indians who are attacking the train are very weakly written. Poor old Chief Yowlachie had the unenviable (uncredited) task of being their chief. He only gets to say Ug, me big chief and the like. Yakima-born Yowlachie was in 94 film and TV Westerns from the silent Kentucky Days in 1923 to the Steve McQueen color movie Nevada Smith in 1966, including some fine Westerns like Red River and Winchester ’73. But he rarely got the chance to say more than Ug. 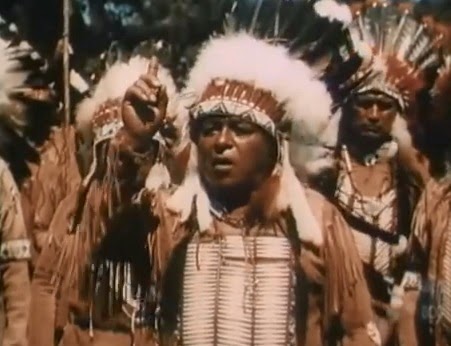 Yowlachie
Canadian Pacific is just about watchable but coming the year after the ultra-classy Coroner Creek and the year before the excellent The Nevadan, I’m afraid it’s on the low end of the Scott Oater Scale (SOS). It wasn’t Randy’s fault; it was just poor writing and direction. 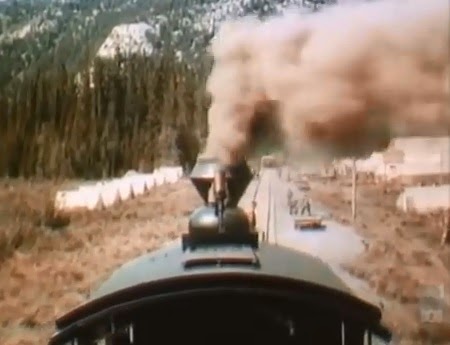