Director William A Wellman claimed that he spent months researching the real William F Cody with writer Gene Fowler (who worked on the 1939 Jesse James and the 1941 Billy the Kid) but they decided that the unfaithful, drunken charlatan they uncovered could never be brought to the screen. Debunking great American heroes was not for them – especially in wartime (1943/44).


They couldn’t destroy Buffalo Bill’s reputation so they destroyed the movie instead. 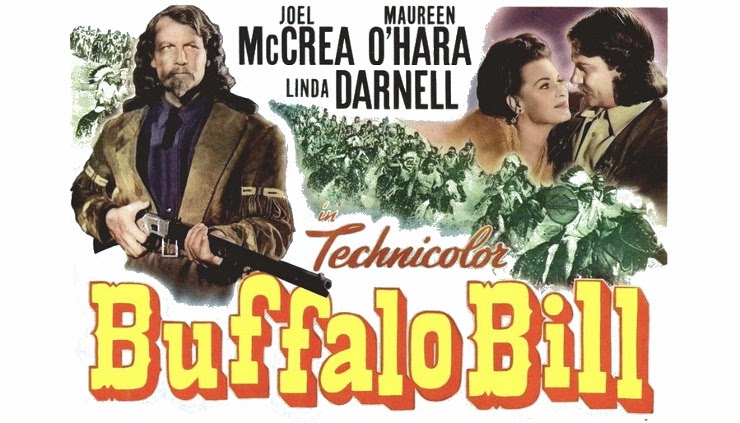 Actually, Wellman didn't want to helm the picture at all but Fox reminded him that he had only been allowed to make the fine but box-office-unfriendly The Ox-Bow Incident the previous year on the understanding that he would direct any script they gave him next. Together with producer Harry Sherman (the Hopalong Cassidy guy) Wellman and Fowler produced a sloppy Hollywood-whitewash biopic which certainly didn’t respect history (well, nothing unusual about that) but worse, didn’t even respect Western myth. Buffalo Bill is of course most famous – the world over – as the great showman. In this film his whole Wild West Show career is telescoped into the last five minutes. The picture just covers (absurdly) his early days and (equally falsely) his romance and marriage.


Buffalo Bill is essentially an old-fashioned Western, despite its Technicolor and promotion as ‘new’ by Fox. It’s over-simplified (what they these days call simplistic) and hokey. Stilted, I would say. 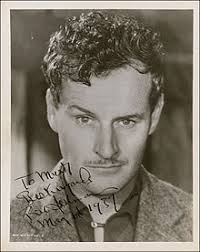 The rather dashing William Wellman


Having said all that, the film has certain merits. Chief among them stands Joel McCrea. McCrea was always absolutely first class in Westerns. Although he’d been in movies since 1926, he’d not been in oaters in his youth. He was uncredited in a tiny walk-by part in Scarlet River in 1933, so we don’t count that. He was third billed in Barbary Coast in 1935 but that was only a semi-Western. However, he had finally hit Western paydirt with his lead part in two big nation-building epics, Wells Fargo (1937) and Union Pacific (1939). In 1942 Wellman had directed him with Barbara Stanwyck in a rather turgid romance billed as a Western, The Great Man’s Lady. Buffalo Bill was, however, easily his finest role to date. He is superb in it. Dignified, noble, decent, he is the very epitome of the Western hero. Historical bunkum, but you can’t help admiring his performance. 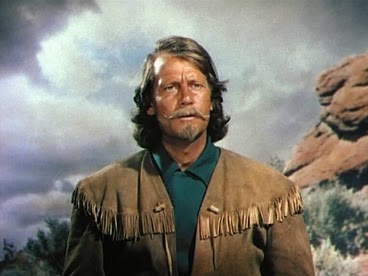 Then there are the wide Utah locations magnificently shot by Leon Shamroy (he later did Two Flags West, The Bravados and North to Alaska) and the sheer scale of the picture. Huge crowds, color, noise. The cavalry/Cheyenne battle scene is truly spectacular. The movie’s budget was over two million 1944 dollars, a huge amount. At one point McCrea talks to his lady over a horse and I swear you can smell that horse. Of course you have to see it in a good print. Fox did a cheapo re-release in black & white later. Make sure you get the right DVD and have a good big screen!


As for the lady, well, that was Maureen O’Hara. Now I will not disguise the fact that I am no O’Hara fan, and indeed have been rather slighting of her in other posts. I dislike her parts in the Ford/Wayne movies and find her unsympathetic and rather overweening. Still, she is much better in Buffalo Bill, partly, I think, because she was younger and did not try to boss the picture around so much. Charles Laughton, entranced by her beautiful eyes, had only discovered her in 1939 (The Hunchback of Notre Dame) and the same year Hitchcock put her in Jamaica Inn. John Ford used her for the first time of many in 1942 in How Green Was My Valley. So she was already a big star but she was still quite fresh and restrained. And Buffalo Bill was her first Western. I would even go so far as to say she is good in it. Mind, she plays Louisa as a posh dame from the East (she was in fact born on a farm in Missouri) and also rather more long-suffering, loyal and loving than appears to have been the historical case. In historical fact, of course, she had a great deal to put up with but as I said above, the 1944 Buffalo Bill and historical fact are not exactly bedfellows. A smaller part is taken by Linda Darnell as a very unconvincing and over-made-up Indian maiden in love with Bill and jealous of Louisa. Darnell was big box-office: she had starred alongside Tyrone Power in the 1940 Zorro and in the Brigham Young biopic the same year. I remember her most for her Chihuahua in My Darling Clementine, when she verged on the ridiculous. She was rarely good in Westerns (I make an exception for Two Flags West and she wasn't too bad in Dakota Incident) and soon descended into TV work.


But we’ve got three excellent performances to comment on. One of my favorite Western character actors, Edgar Buchanan, plays an elderly cavalry sergeant, superbly. Sgt. Chips McGraw looks so old in his white walrus mustache that you don’t think it’s Buchanan at first, but right away his voice and that waddly walk he had tell you it’s Edgar alright. Actually, he was only 41 at the time. It’s a great performance and really quite moving when the old soldier is retired. 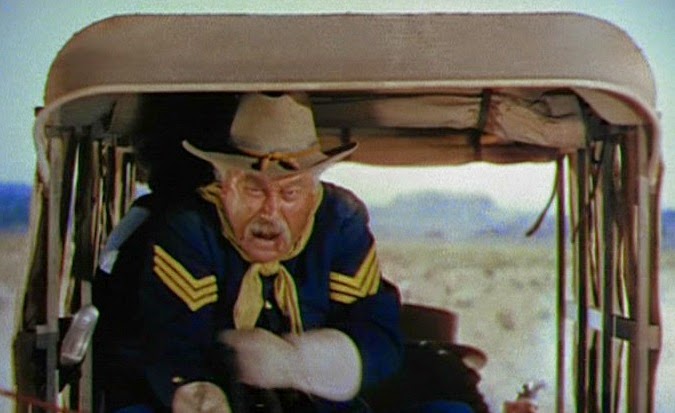 Then there’s Thomas Mitchell as that scoundrel Ned Buntline, spouting temperance while gulping down slugs of liquor. Of course Mitchell made rather a thing of playing a drinker – one thinks particularly of Stagecoach.  He was a hopeless Pat Garrett in The Outlaw but then it was an utterly lousy film. But he’s very good indeed in Buffalo Bill. 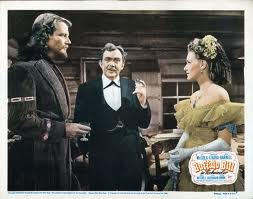 And we also have a young Anthony Quinn as Yellow Hand. In The Plainsman in 1936 he’d got his first part in a movie as an Indian by convincing Cecil B DeMille that he spoke Cheyenne fluently (he didn’t know a word). He’d also been Crazy Horse in ’41 in They Died With Their Boots On. These parts made him the obvious choice for Yellow Hand – in actual fact a Cheyenne warrior named Heova'ehe, which translates as Yellow Hair but for some reason he is always called Yellow Hand. Quinn had had some other small parts in Westerns (he was memorable as the top-hatted murderous gambler in Union Pacific, for example) and of course he went on to star in some truly fine films, Viva Zapata!, Man From Del Rio, The Ride Back, Warlock, Last Train From Gun Hill and many more. In Buffalo Bill, though, his Yellow Hand is a one-dimensional part, pretty typical of the day. Still, Quinn lifts it out of banality. 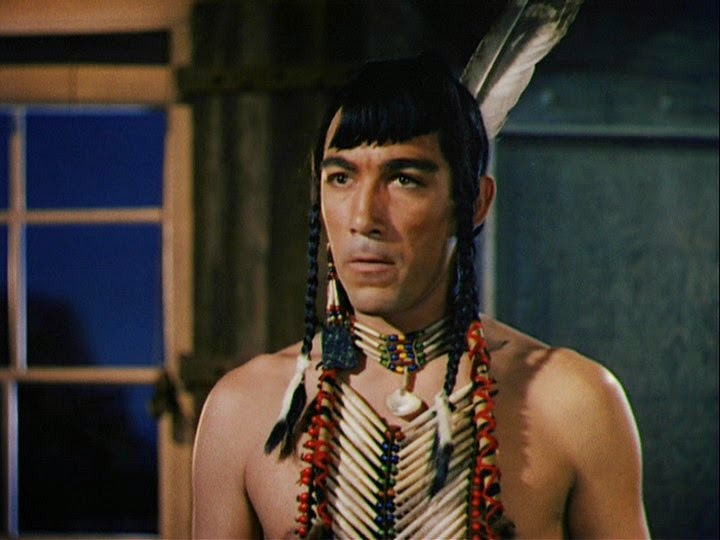 So some good support acting.


The film is commendably pro-Indian and shows Bill as on their side, and the white men, especially the politicians, as arrogant and ignorant.


The movie ends as Bill (McCrea looking absolutely splendid in white goatee and long hair) bids farewell to the Wild West crowd and because of McCrea it’s quite moving, but then the atmosphere is ruined by the director having a small boy on crutches saying, “And God bless you too, Buffalo Bill!” like some second-class ultra-corny Tiny Tim. 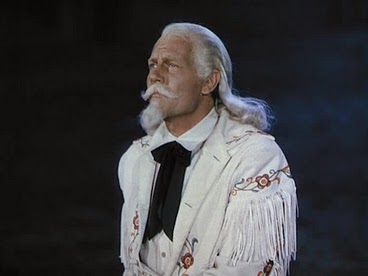 Buffalo Bill is one of the best known Cody films, if not the most famous of all. A pity it wasn’t better.