The seminal Western novel The Virginian: A Horseman of the Plains by Owen Wister was first published in 1902. It sold hugely straight away and still does. It had a major influence on the whole genre and in many ways was what academics love to call the Western Ur-novel. So many Western characters and situations and so much dialogue has passed into standard, conventional Western usage in book after book, film after film ever since. Click the link above to read more. 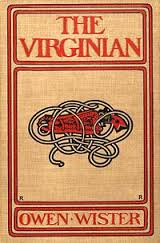 Right away, the book was adapted for audiences who preferred to listen and watch than to read. In 1904, well-known actor Dustin Farnum appeared as the hero on Broadway in a theatrical version of the story which had been written by Wister with playwright/producer Kirke La Shelle. (La Shelle was in fact a son of Wyoming and he started as a journalist there. In 1895 he produced the monster theater hit The Wizard of the Nile and made his fortune, following it with other successes, so he was a front-line choice for Wister to collaborate with.) Like most people, I have never seen this play, nor, sadly, can I find the text anywhere, so I don’t know how it was different, if it was. It was, apparently, a hit anyway. 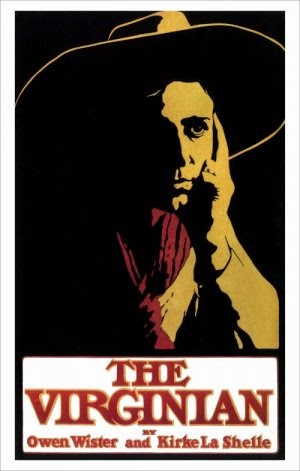 Farnum was the natural choice to star when ten years later Cecil B DeMille directed the first silent movie version (Jesse Lasky/Paramount, 1914). This was released in a new print in 1994 and well worth watching.


Later, of course, there was the greatest film version, the 1929 talkie starring Gary Cooper, as well as a post-war color version in 1946 starring Joel McCrea, which wasn’t bad but wasn’t as fine as the Coop one. And there were even later ones, in 2000 (rather good) and 2014 (poor). That's a lot of Virginians. You can read reviews of those by clicking on the live links.


But today I want to talk about the other movie, the 1923 silent starring Kenneth Harlan, which is readily available (e.g. from amazon) in the Lost Silent Classics Collection of DVDs. It is eight reels, 84 minutes long. 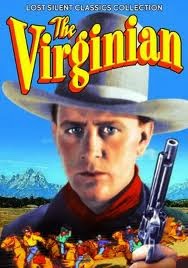 It’s actually quite good. Kenneth Harlan (1895 – 1967) was, Wikipedia tells us, “an American leading man of the silent film era, playing mostly romantic leads or adventurer types”. He was first a lead in 1916 under DW Griffith. Later, “He made a smooth transition to talkies, even singing in a few films, but his film roles remained minor throughout his later career. Harlan worked until the 1940s and retired in 1943.” He was in fact in many Westerns, 29 altogether ending with Daredevils of the West in 1943, but The Virginian in 1923 was his first. He had rather craggy good looks and was quite convincing as The Virginian, at least in appearance (which is after all the main thing in a silent movie). Furthermore, although many of these silent actors hammed it up unmercifully, Harlan was relatively restrained and he managed to communicate the taciturn toughness and decency of the original hero well. Only in the scene where Steve is lynched does he do a really corny closed-eyes look-away to show his grief, and you grimace, but that was standard then and as I say, most of the time he is very solid. 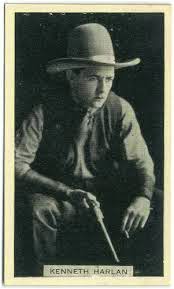 The best thing about the movie, though, is Russell Simpson. Now I am a dyed-in-the-wool Russell Simpson fan and wrote about him recently in my review of the 1930 Billy the Kid, in which he played McSween, so click the link if you want to read more about the Blessed Russell. He had in fact had a bit-part in the DeMille 1914 The Virginian but here is promoted to the key role of Trampas. With his black mustache and evil leer, he is superb. He was 46 at the time, though looks younger. We are so used to seeing Simpson as a religious elder or old timer because John Ford took him up after the Second War, when he was already in his late sixties, and it comes as quite a surprise to see him leap athletically aboard a horse and gallop off. The movie is worth watching for the Simpson Trampas, if nothing else. The scene where he kicks his fallen horse (unfortunately, it looks as though he really did kick it) and the one where he shoots his partner Shorty in the back to get the horse they are then sharing make him a really nasty villain. Sadly, I can’t find a photo of him in this role.


The film was directed by Tom Forman, born 1893, who acted in, wrote or directed eight Westerns (his last was The Flaming Forties in 1924 starring Harry Carey) before shooting himself in the heart in 1926. He does a good job on The Virginian, especially visually. There are some fine scenes with the Alabama Hills up at Lone Pine standing in very successfully for Wyoming. The episode in which the (very large) posse led by the Virginian catches two of the rustlers (including Steve) and huge shadows are projected onto the rockface by the firelight, is especially well done. The cinematography was by Harry Perry who later shot Howard Hughes’s Hell’s Angels and Wings for William Wellman.


Florence Vidor is a very pretty Molly. In the book Molly is in my view an essentially silly person but in this film she has a bit more weight and seriousness as a character. Ms. Vidor (King Vidor’s wife) was a famous beauty and it shines through, despite the fashionable cupid’s bow lipstick and 1910s dresses. I don’t know why women in Westerns always wore dresses of this period. Such attire was contemporary when Western films were first made but they remained standard issue right through into the 1930s. Men’s costume made some attempt at 1870s authenticity, especially under William S Hart, but women always wore dresses of about 1910 vintage, whatever the year of making the film or the year it was set in. 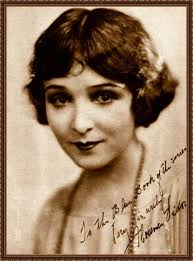 The movie concentrates on the usual episodes of the book (as perhaps the play did), namely the opening saloon scene, in which Wister’s famous line is given: “When you call me that… smile!”, followed by the Virginian saving Molly from the stage when crossing the river and then the baby-swapping party. The hanging scene is quite dark and sinister, prefiguring The Ox-Bow Incident in a way, and as in all versions, novelistic, theatrical or filmic, it is a difficult moment dramatically. How to make a man who leads a cold-blooded illegal lynching seem sympathetic? It isn’t easy.


The final climactic Main Street shoot-out, however, is poorly handled, filmed with a tensionless static longshot which lacks drama. Mr. Forman slipped up as director there.


The wedding-day gunfight with unwilling bride reminds us of High Noon, of course and the later Gary Cooper version of The Virginian especially reinforces this link to all Western fans, aka human beings.


I would also just mention Sam Allen as ‘Uncle Hughie’. Allen was a veteran actor who joined Biograph in 1910, was in eight Westerns (this was his first) and has the distinction of being an exact Gabby Hayes lookalike.


Raymond Hatton provides a comic-relief Shorty who also shows pathos and tragedy. Hatton was in over 500 films and is best known to Westernistas as Rusty Joslin in The Three Mesquiteers series and as Johnny Mack Brown’s sidekick. 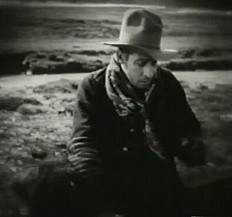 The 1923 version of The Virginian is not the best one. That prize will forever be reserved for the Coop talkie of 1929. But it is quite classy and for all those interested in this key story in the romance of the West, it’s a must-see.