All through the 1920s and 30s, with a few notable exceptions Westerns were for youthful audiences. Sometimes a ‘big’ one would appear that seemed aimed at adults as well. One thinks of The Covered Wagon in 1923, The Iron Horse in 1924, The Virginian in 1929 and The Big Trail in 1930, as well as some others. But by the 1930s the vast majority of Westerns produced were serials or programmers that starred flashy duded-up ten-gallon-hat-wearers or, worse, singing cowboys. If you take the mid-year of the decade as an example, 1935, you find that there were 147 Westerns produced, so clearly they were immensely popular, but with the possible exception of EGR in Barbary Coast and Barbara Stanwyck as Annie Oakley, they were boy-fodder. Tom Mix in The Miracle Rider, for example, or William Boyd as Hopalong Cassidy. There were three Hopalong movies that year alone, John Wayne was in eight B-Westerns and Gene Autry was in five. Not that they were bad. In fact some of them (not the Wayne ones) were fab. But they weren’t serious Hollywood ‘A’ pictures for grown-ups.


Then along came John Ford. The story of Stagecoach is well known. It is not always remembered, however, that although Ford had acted in or directed 44 silent Westerns in his career before Stagecoach, he had not done one since his 1926 version of 3 Bad Men and had never done a talkie. He appeared to have abandoned the genre. Stagecoach was very hard to get produced. A Western in which the actors are all cooped up in a stage and just talk? And the heroes are an escaped convict and a prostitute? The big studios just didn’t want to know. In the end Walter Wanger produced it for Ford, United Artists released it and it was, gradually, a huge success.


Then, suddenly, the big studios did want to know. Westerns for adults? Wait a minute, we might be onto something. Fox’s Tyrone Power, for example, a huge star, had done comedy/romance/dramas like Café Metropole, Second Honeymoon or Love Is News. They were getting a bit samey. But he’d also made historical dramas like Suez and Marie Antoinette. Why shouldn’t he be Jesse James? Put a bit of romance in there, throw a big budget at it, produce it in color (still quite rare then) and you have a hit, surely? Universal could put immensely popular James Stewart alongside megastar Marlene Dietrich in a big Western saloon (black & white; we can’t throw too many dollars at it). Paramount could have Cecil B DeMille direct Stanwyck and this handsome new star Joel McCrea in a Manifest Destiny epic about crossing the continent with a railroad. And of course Warners wanted in too. After all, if Errol Flynn could bring in the big bucks by buckling swashes on the Spanish Main in Captain Blood (1935), lead dashing cavalry attacks in The Charge of the Light Brigade (1936) or shoot longbows in Lincoln Forest in Robin Hood (1938), why can’t we give him a six-gun and have him clean up Dodge?


They were right. Lines (of adults) formed round blocks all through 1939 to get into movie theaters to see Jesse James, Destry Rides Again, Union Pacific and, yes, Dodge City. 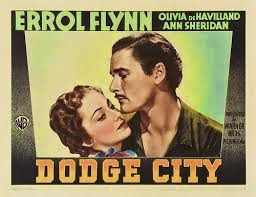 Michael Curtiz directed. Hungarian Curtiz had made huge numbers of silent movies in various European countries and come to the US in 1926. He did dramas, crime and war pictures through the late 20s and directed Al Jolson in the famous talkie Mammy in 1930. He even did three Westerns: River’s End with Charles Bickford in 1930, Under a Texas Moon with Frank Fay the same year and Gold is Where You Find It with George Brent (and De Havilland) in 1938 – although none was especially good. Through the 30s he did dramas for Warners, the occasional horror, some rom coms. But in 1935 he directed Errol Flynn and Olivia De Havilland in Captain Blood and the following year repeated the formula with The Charge of the Light Brigade. Then in ’38 the pair were in Robin Hood. The movies were all huge hits. Curtiz was the obvious choice for Dodge City. 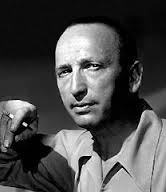 Dodge City has Michael Curtiz stamped all over it. Big scenery, huge crowds, noise, bustle, action galore and through it all a romance between De Havilland and Flynn starting in hostility and building to lerve. And yet… Curtiz never really ‘got’ the Western in my view. His pictures were English outlaws or pirates in the West. The true spirit of the Western eluded him. Yes, his oaters were fun, brash, action-packed. But they were commercial hits of the day rather than true cowboy films. Not everyone would agree with this, I know, but while Dodge City is a whole lot of fun and may have made more $$$ for Warners than other grown-up Westerns did for the other big studios, in the last resort it probably runs last in the quality stakes. 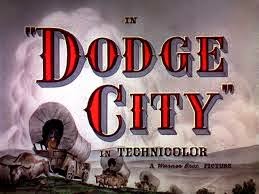 The movie opens with titles over some very nice paintings. We are pleased to see in the credits that camera work is by Sol Polito (27 Westerns, including most of the Curtiz/Flynn ones) and Ray Rennahan (Drums Along the Mohawk, Duel in the Sun, Whispering Smith and many other goodies, including the fun B that I was on about yesterday, Denver and Rio Grande). So quality there, alright. And I see special effects (in their early days) were by Byron Haskin, who directed Denver and Rio Grande. 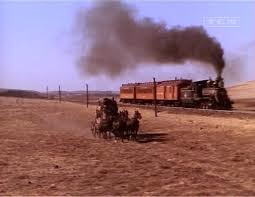 We open with a classic image, a train at full steam filmed head-on, and right away there is a race between the train and a stagecoach (in which the driver [Bud Osborne] whips the poor horses unmercifully). There are lovely wide open scenes of Kansas (California, actually, but it looks like Kansas). 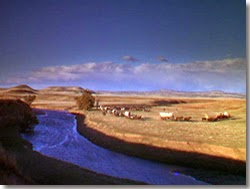 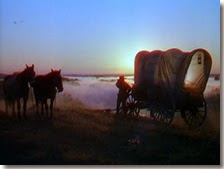 Three amigos appear. They are Wade Hatton (Flynn) and his comic sidekicks Algernon ‘Rusty’ Hart (Alan Hale) and Tex Baird (Guinn ‘Big Boy’ Williams), come in from buffalo huntin’ and now aimin’ to run down to the new town founded by Colonel Dodge. 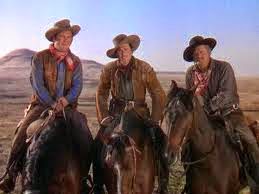 Flynn’s rather Australian/English accent is explained away as we are told that he has knocked around the world, serving with the British army in India, been in Cuba and then with JEB Stuart in the recent unpleasantness. Reasonable enough: the real West was full of international adventurers. To be fair, Flynn, gun high on hip and rather dashing Stetson, does look the part and carry it off as a Westerner, despite his accent and pencil mustache. 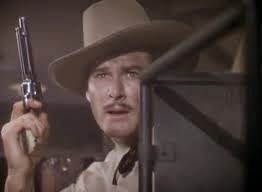 There is a stampede caused by a drunken fool, Olivia’s brother (William Lundigan), and Wade is forced to shoot the fellow and then the man is trampled to death by the steers. Wade is very polite and apologetic about it but Olivia is extremely cross. Their relationship hasn’t got off to a good start.


In Dodge, Wade looks a bit skeptical as Col. Dodge (Henry O’Neill) outlines the moral and decent future of his new town, filled as it will doubtless soon be by churches, schools and temperance halls. Wade’s right. A rather old-fashioned intertitle card tells us that Dodge rapidly became the “longhorn cattle center of the world and wide-open Babylon of the American frontier, packed with settlers, thieves and gunmen—the town that knew no ethics but cash and killing". Curtiz liked this bit - gunfights in the street, a huge saloon brawl, drunkenness and wildness. 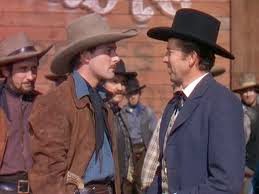 and his henchmen, including the excellent Victor Jory (he always looked so sinister) and even, in a small part, Ward Bond. 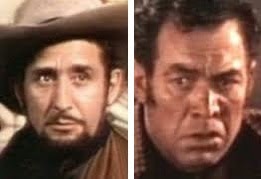 They have run off every lawman and the sheriff’s office is gathering dust with a board marked CLOSED nailed across the door. The S of CLOSED is reversed but sadly I can’t find a key on my computer to render that amusing symbol of the educational level of then Dodge residents for you. Surrett is used to buying cattle and then murdering the vendor so that he doesn’t have to pay, the cad. He even has cattleman Russell Simpson gunned down – Russell Simpson, my hero! It really is too much. The townspeople ask Hatton to pin on a star. At first he refuses – being a policeman is not his line at all – but then, after a small, chirpy boy is killed in the wild gunplay, he looks stern and pins the badge on (to his gunbelt, rather than his shirt, which is quite cool).


This exact plot was repeated in a virtual remake by Warners, Wichita in 1955, directed by Jacques Tourneur, in which Joel McCrea as Wyatt Earp is unwilling to pin on the star until a child is killed, then brings law ‘n’ order to the wild streets. McCrea was excellent and in fact it is a much more serious film which attempts to say something about violence and gun laws. McCrea did it again as Bat Masterson in The Gunfight at Dodge City for Universal in ’59 and indeed it is a well-known cliché. Even when Curtiz did it the hills were relatively youthful by comparison. Errol Flynn is Wyatt Earp (the Earp of legend, not fact) in all but name.


There’s a scene of competitive singing which Curtiz was to repeat in his greatest film, Casablanca, three years later. In the saloon, Tex sets up a chorus of Dixie to drown out the Marching Through Georgia sung by the crowd.  It leads to the famous brawl. Mind, it’s only the embryo of the Casablanca scene, which still unfailingly brings a tear to my eye every time I watch it. Dixie isn’t really the Marseillaise. 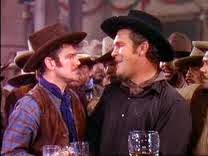 There has to be a slightly shady lady as well as the lead, and that was Ann Sheridan as the chief saloon girl. Of course Flynn thinks about dallying with her for just a moment but we all know he’s destined for Olivia. 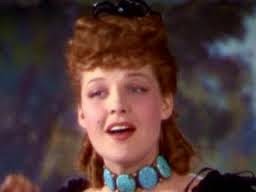 Douglas Fowley is in town with Russell Simpson, and Monte Blue too, so all’s well with the world. How I like to see them!


Well, you know what happens. Hatton duly cleans up Dodge and Olivia falls for him. There’s a good all-shootin’ action climax on a train as it catches fire. Surrett is eliminated by Errol with a Winchester. Flynn and De Havilland set up the Warners sequel by riding off into the sunset to Virginia City (1940) and they all live HEA. 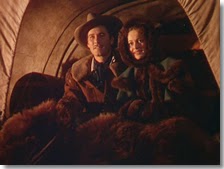 There was a huge movie première in Dodge and the DVD has an excellent feature about that. Flynn rode down Wyatt Earp Blvd on a stallion with a fancy Spanish silver saddle, accompanied by the Governor, la Sheridan, Alan Hale and Guinn Williams. But there was no sign of Olivia at all. I don’t know if she snubbed it or what. Still, huge crowds cheered the stars and the movie. If Flynn had had any doubts about doing a Western he could forget them now. He was right up there on the cowboy Mount Parnassus (somewhere up in the Rockies, doubtless). 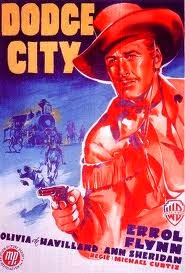 Frank S Nugent was a bit snooty about it in The New York Times. “One street fight looks much like another,” he wrote, and “three men being tossed through windows are no more diverting than one would have been”. He added, “There can be no suspense when the hero is as invulnerable as Mr. Flynn's Wade Hatton”. The critic sums the movie up thus: “Michael Curtiz's direction has been flawless part by part, but, as a whole, it has failed to fuse his film into anything approaching dramatic unity. It has become merely an exciting thriller for the kiddies, or for grown folk with an appetite for the wild and woolly.” He had a point. 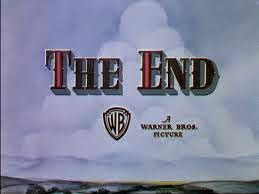