I have always loved Denver and Rio Grande. I saw it when I was a small boy (Bronze Age) and have never stopped admiring it. Indeed, I made the Royal Gorge railroad war of 1879 the subject of my first Western novel, Fight Back. What really struck me as a lad and still does is the utterly spectacular crash, filmed without special effects, as it happened, with two locomotives smashing at full speed into each other on the single track. In these days when even railroad Westerns like the recent 3:10 to Yuma remake can barely afford a train and have to fudge one with two inches of track and some smoke behind a saloon, to crash two for a B-Western seems incredible profligacy. But it’s great. 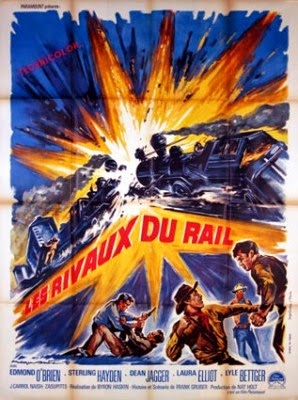 Kapow!
Railroads have always played a key part in Westerns. Usually, railway companies were the villains, stealing honest settlers’ land and being resisted by the likes of Jesse James, the Daltons or whoever (all fiction, of course). But in this one, the DRG are the good guys. In my novel the DRG and the Atchison, Topeka and Santa Fe (ATSF) Rail Road, who fought each other for right of way up the narrow Royal Gorge to Silverton and ultimately Leadville, are equally rapacious and ruthless, and this seems to have been the historical case, but in this movie it’s the ATSF who are the villains. They must be because they have a bearded Sterling Hayden as their boss and slimy, smiling Lyle Bettger as his sidekick. 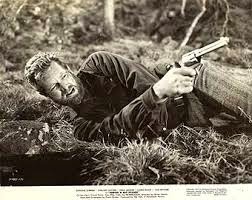 Hayden really tough
For some reason, probably legal, the ATSF is not named. The rival line is called the Cañon City & San Juan RR (CS&SJ).


The movie still has a hell of a lot going for it. Filmed in Technicolor in the Royal Gorge - and by the way you can still take that ride, Durango to Silverton, and absolutely wonderful it is too - with Ray Rennahan behind the lens, it is as spectacular as it is attractive, though it is true that there are too many studio shots on sound stages. There is a cracking pace to the action. Director Byron Haskins had been a cinematographer in the silent era, then had directed Disney’s first live-action picture, the 1950 Treasure Island (the one with Robert Newton as Long John Silver). Later he did The War of the Worlds. He was involved in 18 Westerns, from the cinematography on the silent Broken Chains in 1922 to directing a 1958 TV episode of The Californians. Denver and Rio Grande in ’52 was his last feature film Western and a worthy finale it was too. The film is a rip-snorter. 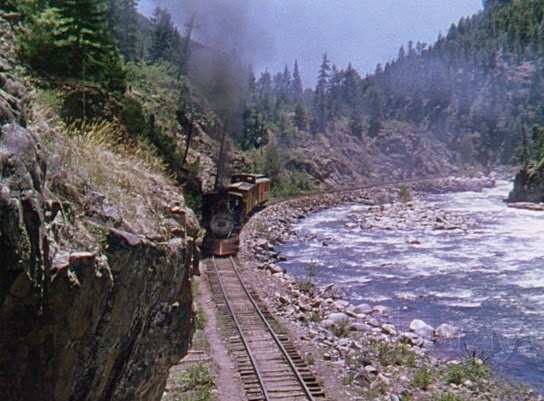 Royal Gorge, very nice
True, the writing is pretty ‘B’. Frank Gruber has been described by the Great Guru Brian Garfield as “a numbed pulp magazine veteran of every known cliché.” But hell, it’s a B-Western with Sterling Hayden. Of course it’s clichéd. And it sure wasn’t corny to a boy in the 1950s. I can vouch for that. It was just plain gripping. And anyway, as all Western fans know, there is a fine line between cliché and respect for convention/affectionate quotation, and this falls on the right side of that line.


Hayden was, as you know, a veteran himself. He was in 30 Westerns (including TV episodes), many of them real Poverty Row clunkers, and he hated most of them. A pity because he was very good in them, whether as the hero or heavy. D&RG was only his second oater, in fact. He was in another railroad-building flick, Kansas Pacific, the following year, another favorite of mine, and is pretty good in that, though is probably best known for playing the title role in Johnny Guitar, a candidate for the best (and weirdest) B-Western ever filmed. In D&RG you see how tall and tough he was and really quite fearsome as the very bad guy. 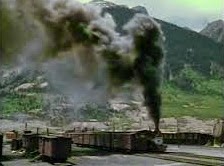 Looks like Silverton
We all know, and love to hate, Lyle Bettger. He was one of the best smiling villains ever. The Iago of the West. Here, as Johnny Buff, he wears range clothes but he was really at his best in a fancy silk vest. With his blond hair and Teutonic looks he would have been perfect as a Nazi SS officer but he did a lot of Westerns, almost always as the seriously slimy bad guy. He was in 61 film and TV oaters, from 1952 to 1970 (he died in 2003), and D&RG was his first Western feature. You may remember him as Ike Clanton in Gunfight at the OK Corral. I liked him as the villain in The Great Sioux Uprising. Hell, I liked him everywhere.


On the other side, the goodies, we have Edmond O’Brien as the hero. He was ever so slightly miscast, I think, as action lead, though it is one of his most famous Western roles. I remember him most for his crazed Confederate officer in Rio Conchos, his Dutton Peabody in Liberty Valance and of course his outstanding Sykes in The Wild Bunch (by which time he was still only in his mid-fifties though he appears as a crusty old timer). If he doesn’t quite carry it off as the dynamic railroad man in D&RG all is forgiven for his perfectly splendid hat, a black slouch worn at a rakish angle and one of the Great Hats of Westerns. 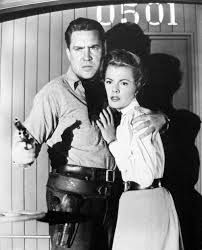 Should have worn his hat in the publicity still
We have Dean Jagger, authoritative and competent as D&RG boss General Palmer, and J Carrol Naish (79 Westerns 1931 - 1970, time and again an Indian chief) as the ramrod Harkness. 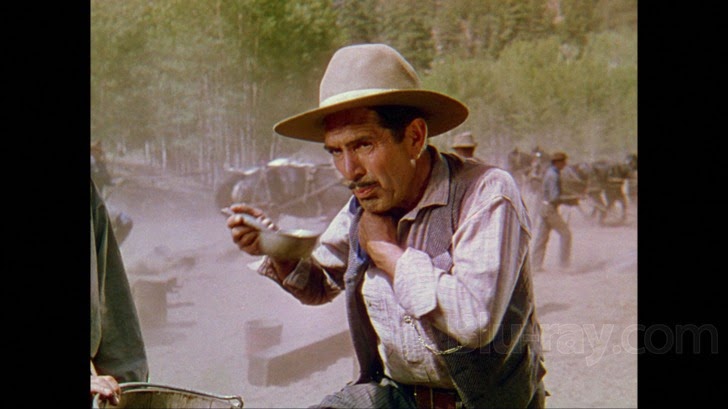 The great Paul Fix does an amusing comic relief part as the engineer, flirting with an equally good Zasu Pitts, the eternal eccentric spinster. 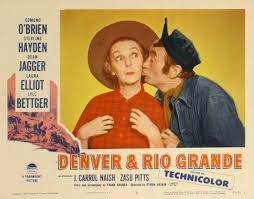 Comic relief
Only Kasey Rogers (as Laura Elliott) is not very good as the love interest, Linda. She comes across as plain unsympathetic but it was probably the writing, not her fault. However, she does have a really groovy typewriter. I love period gadgets in Westerns.


One disappointment is that the AT&SF in historical fact recruited some Dodge City toughs, including Doc Holliday and led by Bat Masterson, to fight for their side but these make no appearance in the movie. Lost opportunity, really.

And the barman quells a saloon fight with a derringer. Hooray!


Looking back on it now, Denver and Rio Grande is, I suppose, really only an average B-Western but for me it will always be one of the great examples of the genre, a movie for which I have always had and still do have, the greatest affection. And you can love B-movies too, you know. It’s a must-see, e-pards.