Right away, from the very opening scenes, when you get that swirling, slightly sentimental introductory music and Anjelica Huston’s name comes up big on the TV screen, you say to yourself, ah, Lonesome Dove rides again. 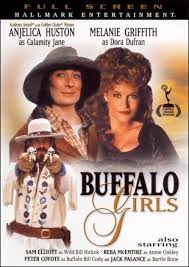 And why not? Dove was such a great example of the TV Western that naturally we welcome something similar. Of course, it’s more modest, with a runtime of 180 minutes, and there’s no Tommy Lee or Robert Duvall. Still, it is based on a Larry McMurtry book, Suzanne de Passe has produced it and a cast led by Anjelica will do us nicely, especially when backed by the likes of Gabriel Byrne and (especially) Jack Palance and Sam Elliott.


It’s the story of Calamity Jane, that famous frontierswoman, Martha Jane Cannary (1852 – 1903). Much of what we ‘know’ about Jane comes from a booklet she is supposed to have dictated in 1896 but some of its contents were certainly exaggerated, if not downright false. Still, McMurtry allows himself a particularly free rein with history and his Jane has a child by Wild Bill Hickok and accompanies Buffalo Bill Cody (Peter Coyote) to England with the Wild West Show. 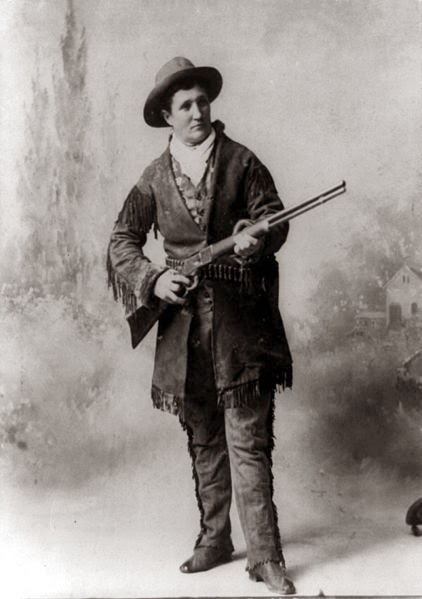 The story starts in 1876 when Jane and her two pards, mountain men Bartle Bone (Palance) and Jim Ragg (Tracey Walter), abandon Custer (John Diehl) quick, sensing that bad things are looming. Calamity Jane was actually 24 then, and Ms. Huston in her mid-40s, but never mind. Jane witnesses Little Big Horn and sees Custer scalped. She admits to her bosom pal Dora (Melanie Griffith) that she is hopelessly in love with Wild Bill (Elliott, splendid). The story respects history more than many Hickok/Jane movies, having Calamity correctly absent when Jack McCall shoots the famed gunman in Deadwood. But McCall is hanging from a gibbet in the main street in Deadwood when Jane gets back so we can’t say it’s too historical. Jane gives up her daughter by Bill to a rich English couple so that the child may be raised well but comes to regret it and determines to recover the infant. That is why she accompanies Cody to London. 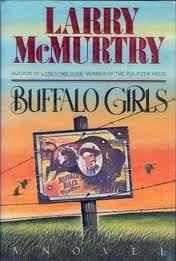 Sitting Bull is brilliantly played by Russell Means as a nasty, malevolent figure and we have as friend of Jane the very sympathetic No Ears (Floyd Red Crow Westerman); both are typical McMurtry creations.


Annie Oakley is portrayed (by Reba McEntire) as a rather prim and proper figure, which she in fact seems to have been, who comes round to liking Jane and helping her get the child back. There is an amusing shooting contest with an English aristo (Peter Birch) which Annie wins for the honor of the stars and stripes, the other red, white and blue. We see Queen Victoria and the Prince of Wales. This part of the story reminds us a bit of Thomas Berger’s The Return of Little Big Man. 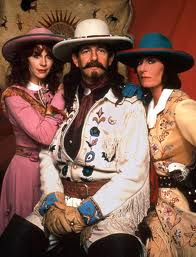 There are some nice UK and New Mexico locations, photographed by David Connell.


It’s really Palance who takes the cake. He hams it up unmercifully but very entertainingly as the splendid figure Bartle Bone. 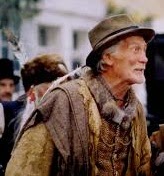