There Will Be Blood (Paramount/Miramax, 2007)


There will be oil

There Will Be Blood, based very loosely on Upton Sinclair’s 1927 novel Oil!, is really a showcase for Daniel Day-Lewis and it is not a Western. Still, it is set in “the West” generations ago, has guns and certain Western tinges, it was billed as a “Western” in the TV guide and I saw it last night so thought I would review it on Jeff Arnold’s West. I, Jeff, have anyway a notoriously liberal idea of what constitutes a Western (pretty well any American movie). 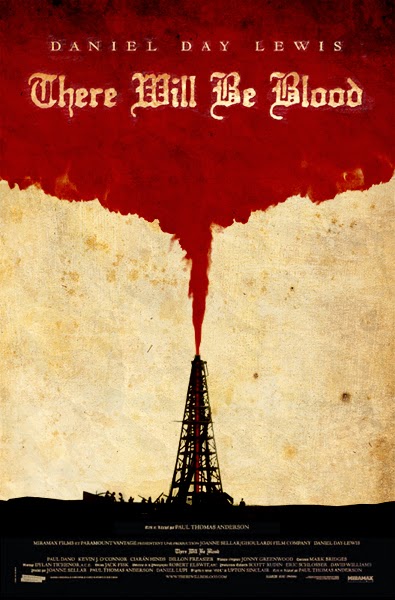 Day-Lewis’s John Hustonesque performance is of the kind usually called towering. It’s the drawl and the raised eyebrows and the dominance. He seems huge. His character’s name, ironically, is ‘Plainview’ and some other names are also mannered (the preacher is named Sunday, for example, and Plainview’s first name is Daniel). He presents himself as a bluff, plain-speaking oilman when he is really a devious swindler who has a mother-lode vein of cruelty in him, and he descends into madness. Probably the most brutal thing about him is the way he uses his “son” (an adopted child) pretty much as a trick to win over ordinary folk. He is quite affectionate towards the boy until the lad is deafened in an accident; then he serves no useful purpose and becomes a nuisance. The scene where he ships the child off to a specialist school for the deaf is heart-breaking.

Paul Dano (wonder if he is related to Royal) plays two brothers and that creates some confusion with the viewer but you get over it. He is, mainly, Eli, a corrupt, self-appointed clergyman, and there is war between him and the unbelieving Plainview. Both, though, are willing to be apostates to get what they want and they are as unpleasant as each other. They in fact deserve each other and bring about each other’s ruin. 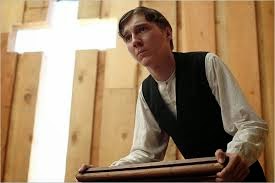 Apart from the boy, the most sympathetic character is probably Henry (Kevin J O’Connor, who also played a Henry in Seraphim Falls just before) who presents himself as a half-brother of Plainview, is accepted - suspiciously quickly - and duly exploited, then murdered by the monster. He is a down-and-out ex-con petty crook but probably the best person in the story. 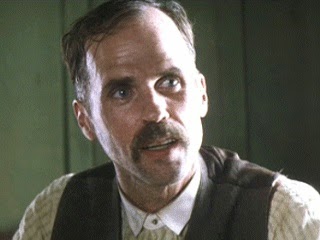 The film is skillfully made with some fine photography by Robert Elswit of the Texas locations and some contemporary, often discordant music by Jonny Greenwood, both of which help to create an atmosphere of menace and darkness. The director is Paul Thomas Anderson, who in 2009 did a video short Western, KnockDown DragOut, which I haven’t seen.


There Will Be Blood inevitably won an Oscar for Day-Lewis (and less inevitably but justifiably for Elswit). But I didn’t really like it.