The Billy the Kid movie that set the standard
(for errors and clichés).
Fun, though.

There was a 1911 short entitled Billy the Kid with Edith Storey as Billy (don’t ask) and a bigger silent movie in 1925 with Franklyn Farnum (no relation to William and Dustin) in the title role. But really the first significant Billy film was the 1930 talkie MGM put out, produced and directed by King Vidor.


Vidor, you probably know, was to become very famous, especially with his War and Peace in 1956, but his career was incredibly long: he made movies from Hurricane in Galveston in 1913 (he had lived through the horrific 1900 storm there) until The Metaphor in 1980. Westernwise he is best known for the 1946 potboiler Duel in the Sun. Billy the Kid was his first oater. He made the 1936 The Texas Rangers (the Fred MacMurray one, rather good), the very weak Northwest Passage with Spencer Tracy in 1940 (don’t bother) and then the famous Cotton/Peck Duel, usually known as Lust in the Dust. His last Western was Man Without a Star with Kirk Douglas (watchable but not great). This Billy came in the early days of the talkie film and tried to be a serious effort, to stand alongside Paramount’s The Virginian of the year before, for example, or Fox’s The Big Trail. Vidor was a great believer in talking movies; he thought spoken dialogue could give depth, subtlety and substance to the Western, a genre he suspected (poor deluded fellow) of vapidity. 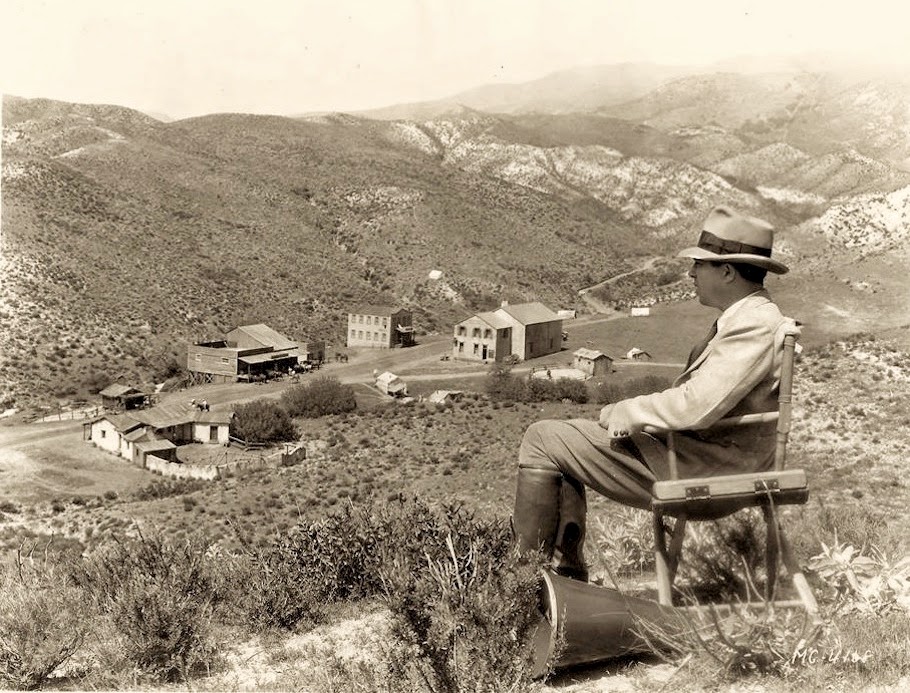 King Vidor overlooks 'Lincoln, NM'
The 1930 Billy the Kid is seminal: it established many of the clichés and falsehoods that were to be perpetuated by later versions and thus pass into ‘fact’. Said to be based on the 1925 Walter Noble Burns book The Saga of Billy the Kid, it is historical tosh from beginning to (especially the) end. But it’s fascinating nonetheless.


Not because of the dialogue: the rather clumsy writing (Wanda Tuchock/Laurence Stallings/Charles MacArthur), slightly wooden direction by Vidor and poor acting by Mack Brown (he is clearly just saying the lines he has learned) render the ‘talkie’ element of the film rather plodding and heavy-handed. Everything stops when the characters talk to each other. There are even still title cards, a hangover from silent movies, to slow the action down and render everything more static.


Johnny Mack Brown, billed as ‘John’, was 26, quite young in fact for a film Billy (Farnum was 47, Kris Kristofferson 37) but looked older. He has a certain energy and charm about him but his hair was very silly. And as I say he was (then at least) a rotten actor. Johnny had been a football star taken up by Hollywood for baseball movies and the like but muscular good looks could only take him so far. Clark Gable was getting the romantic leads at MGM so Johnny tried a Western. Vidor actually wanted Cagney and didn’t rate Mack Brown very highly but had to make the best of it. By the mid-1930s Johnny was making cheap B-Westerns for Mascot, then even cheaper Supreme ones and serials. He was immensely popular with juveniles, though, and made a solid career of oaters. He was in 131 altogether, the last being the Leo Gordon-penned Dan Duryea/Rod Cameron B, The Bounty Killer (1965) in which he had a modest part as the sheriff. John Mack Brown, 26
All Billy films really need an authoritative Pat Garrett, preferably a senior actor with gravitas, and this one got Wallace Beery. Beery had joined the circus in 1902 and then made a career in music halls. He married Gloria Swanson in 1916 but it was a tempestuous and short-lived affair. He became a heavy in silent movies for Paramount but he had a rich, deep voice and MGM hired him for talkies in 1930. Beery was nominated for an Oscar for his part in The Big House in that year and he won Best Actor for The Champ the year after. He was one of the most famous ever Long John Silvers in ’34 and became one of the great stars of Hollywood. He was in 21 Westerns: nine silents in the 20s, then his first talkie oater as Garrett in 1930, and of course he was a great Pancho Villa in 1934. In Billy, Beery’s Garrett has quite a secondary role and is not the ‘anti-Billy’ that later versions wrote him up as. But he does it well. 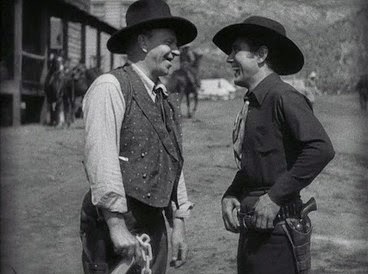 Beery as Garrett (that's a wooden chain he's whittling)
There had to be a girl, of course, and the writers invented Claire (played by Kay Johnson, well known for posh dame roles), fiancée for the English rancher figure (called Tunston). Said gal naturally falls for Billy and feels free to say so when Tunston is conveniently shot. The girl figure is, however, clearly a clumsy invention.


One of the delights of the movie is that 'Angus' (rather than Alexander) McSween is played by Russell Simpson, with a broad Scottish accent straight out of California. I do love Russell. He was ideal as the bible-reading McSween and in fact became quite typecast as preacher, elder or otherwise religious gent. His first role was uncredited in the 1914 The Virginian but he was promoted to Trampas in the 1923 remake. Billy was Russell Simpson’s seventeenth Western (though first talkie). He specialized in Wyatt Earp pictures: he was the judge in the 1932 Earp movie Law and Order, the editor in the 1934 effort Frontier Marshal and he had a part in the Errol Flynn Dodge City in 1939 (he also appeared in later Flynn oaters Virginia City and The Santa Fe Trail). He was taken up by John Ford and was a great Pa Joad in The Grapes of Wrath, also appearing in Drums Along the Mohawk, My Darling Clementine, and Wagonmaster. Watch out for him. You’ll spot that beaky nose. 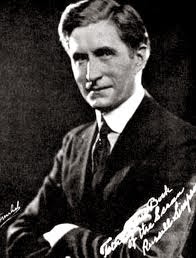 Good old Russell, always good with a bible in hand
Other spottable actors include Chris-Pin Martin as Santiago, the rather stereotypical but sympathetic Mexican (for once not a barman).


There’s a lot good about the film. The scenery, for one thing. Much of it was shot around Gallup NM, and the ‘Lincoln’ looks really authentic (the real one is a great place to visit, by the way). The cinematographer was Gordon Avil, who worked with Beery on The Champ. This was his first Western and he went on to shoot 139 mostly TV oaters and the occasional movie, including Fort Yuma and the 1958 Zorro (if you class that as a Western). In Billy there are some impressive longshot New Mexican landscapes and the scene where Billy holes up in a cave is beautifully photographed. 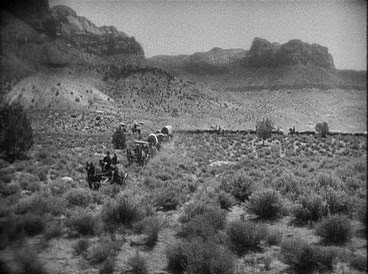 Fine scenery
Then some of the action scenes are quite well done.  Of course it’s all nonsense. LG Murphy has become 'Colonel Donovan' (James A Marcus), a corrupt sheriff/JP and the out-and-out baddy (all Billy films follow this convention of Murphy as the bad guy). Donovan’s chief henchman is the evil ‘Ballinger’ (Warner P Richmond) who duly gets shot with his own shotgun outside the Lincoln court house. Noble ‘Tunston’ (I don’t know why they changed all these names) hires on young Billy Bonney, who is a fast gun but a good boy really. Two endings were filmed: the DVD I have has the American happy ending, where Pat lets Billy escape from Fort Sumner with the lovely Claire. But there was a version for the European market where Billy’s ending is more traditional. 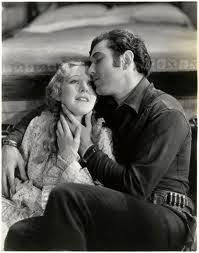 Obligatory love interest
The movie begins with a statement from the then Governor of New Mexico, a RC Dillon, giving the opinion that “though it has taken liberties with the details of his life” [boy, I’ll say] the film is true to the spirit of Billy the Kid’s fight for justice. Yes, well. 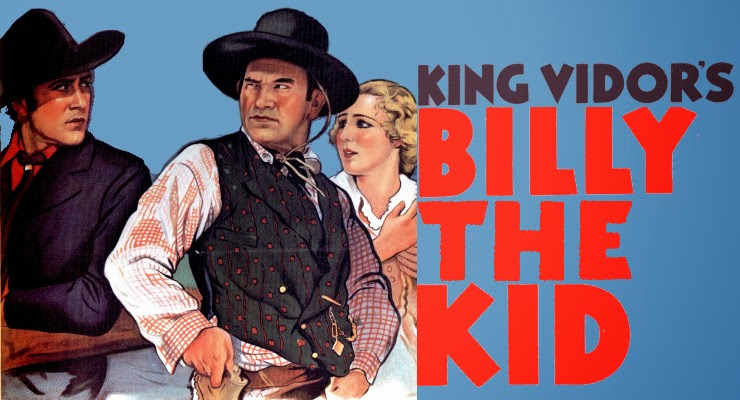 Looks more like a Beery picture than a Billy one
Worth a watch, not only for Billyistas. 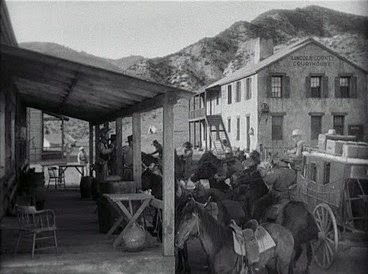 Lincoln, very good
Roy Rogers and Bob Steele would be Billy later in the decade but the next big Billy movie was the 1941 Billy the Kid, with Robert Taylor (aged 30) in the title part.