Wild Bill is shot down, but not by Jack McCall

Back in July 2013 I wrote the first part of a two-part post on Wild Bill Hickok in fact and fiction and dealt with the fact. I promised that it would soon be followed by part 2, the fiction. I have not maintained on my promise, dear e-pards, and I am sorry. Perhaps I had bitten off more than I could chaw. Hickok has been in so many novels and films. William S Hart was the first to play him (as far as I know) in 1923 and he appeared in The Iron Horse (Jack Padjan), The Plainsman (a magisterial Gary Cooper), Pony Express (Forrest Tucker), Guy Madison on TV of course, and many, many more. Jeff Bridges in Walter Hill's Wild Bill. Charles Bronson did him in The White Buffalo and Roy Rogers had a go in 1940. Sam Shepard, Sam Elliott. LQ Jones. Keith Carradine did a fine job in HBO’s Deadwood. The list is very long. Well, I will try to write part 2. One day.


John Carpenter (not the John Carpenter of Halloween but the B-movie producer who died in 2003) specialized in oaters and Western TV shows. He wrote and produced as well as starred in (often under assumed names) five Western movies: Badman’s Gold (1951), Son of the Renegade (1953), The Lawless Rider (1954), Outlaw Treasure (1955) and I Killed Wild Bill Hickok (1956). They were all bad but I Killed Wild Bill Hickok was the worst of them. 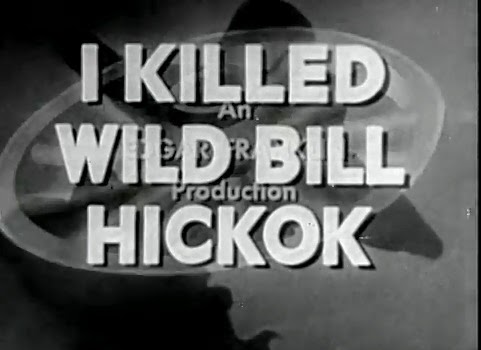 Be warned...
The first thing is to put entirely out of your mind any notion of history. This has nothing whatever to do with Wild Bill Hickok. There is no Deadwood, no gambling, no Jack McCall. He is a crooked sheriff in buckskins shot down in the street by Mr. Carpenter, in a kneeling position, with a Winchester.


Carpenter (billed as John Forbes) is a horse trader known as Johnny Rebel, whose girl (Helen Westcott) refers to him stupidly as “Mr. Rebel.” We start with a shot of a Denver & Rio Grande locomotive taken from some other movie and shown in reverse so the nameplate is in mirror writing. Soon we are introduced to the villain, Bailey. He must be a villain because of his very fancy vest. It is Denver Pyle. Now, we all love Denver. One of the great character actors of the Western movie. But I don’t think Denver ever held his breath just before the winner of the Oscar for best actor was announced, do you? In this he is totally awful. A plank would have been less wooden. Mind, he is not helped by the dreadful, stilted, corny dialogue he is obliged to deliver. Laurence Olivier would have struggled with that. But he really is shockingly bad. In keeping with the movie.

Must be a baddy - works for the railroad
His evil partner-in-crime is Hickok, played by Tom Brown. He wears a very ill-fitting overlong frock coat at the start but soon abandons that in favor of buckskins. New Yorker Brown was in several B and TV Westerns including quite a few episodes of Gunsmoke but I fear he was another who might have decided to give the Oscar ceremony a miss this year. Every year. Though he did get a star on the Walk of Fame in 1960. 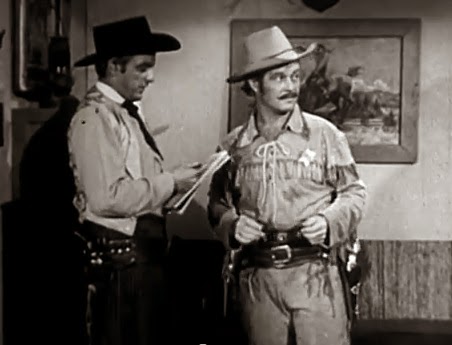 The worst Hickok ever?
There’s a sympathetic Indian played by Roy Canada, who had bit parts in five Westerns 1951-56. He starts off as a Hickok Henchman but realizes the error of his ways. The nearest to a good moment in the film is when he opens a corral gate and sets a herd of wild horses free. 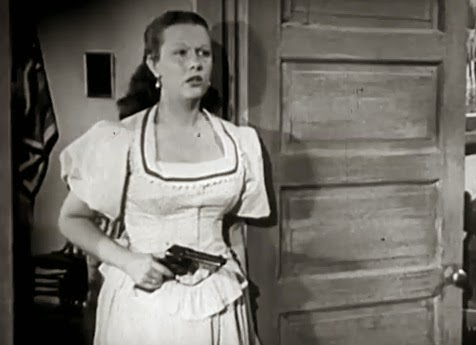 You will rarely see worse
Some of the writing is shockingly bad. One character tells another at the corral to “step on it”, a slightly anachronistic metaphor for the period but no one seems to have noticed. 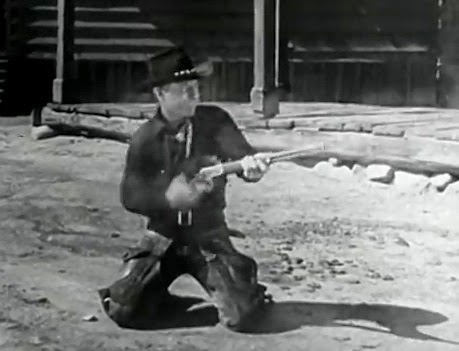 The hero shoots about fifty badmen, all from a kneeling position
It is all amazingly third-rate, especially for 1956. It reminds you of the cheapest of horror pictures shot in black & white, so bad that maybe they have now become cult movies. In some ways it is a prototype of the spaghetti western: bad writing and acting, and very low production values. Just what spaghettis liked.


See it if you have a morbid fascination with the grim. 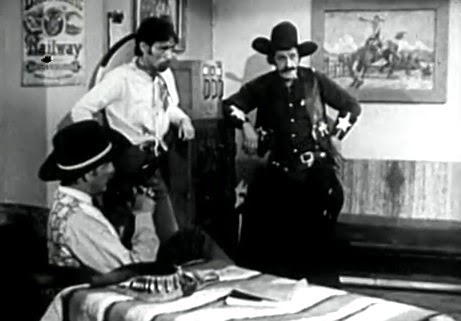