Very B but it has Ben Johnson in it

War Drums is a very 'B' Western of the late 50s with few saving graces, among which, however, are an excellent performance (despite a weak script) by the great Ben Johnson.


Produced by Bel-Air productions, specialists in B-Westerns (about their best were Fort Yuma in 1955 and Fort Bowie in 1958, again with Johnson) and distributed by United Artists, it was directed by Reginald LeBorg, a cosmopolitan type who had studied composition in Vienna under Arnold Schoenberg, gone into banking, traveled to New York to sell his father’s painting collection and worked in advertising. The family lost its fortune in the Wall Street crash and Reginald became a film extra, then signed with Universal, directing shorts and B-features. War Drums was his fifth Western as director. Later he did a lot of TV work. 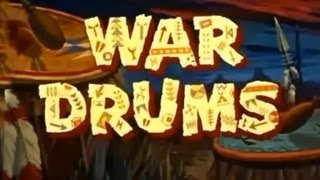 Color B-Western
The movie stars Lex Barker and Joan Taylor. Sexy Lexy was, as we all know, also from a wealthy background. He was a football and track star at college and multilingual but was disowned by his family for wanting to act. Admirably, he worked in a steel mill and studied engineering at night, enlisting as a private soldier when war broke out, and being promoted to major. He became Tarzan in 1949. After five Tarzan pictures he branched out into Westerns. He went to Europe directly after War Drums and became very popular in Germany as Old Shatterhand in the Karl May movies. He died of a heart attack in 1973 aged only 54. So an interesting chap. Honestly, though, his Westerns weren’t very good. His first Western lead was in Battles of Chief Pontiac (1952) and there followed a series of less-than-glorious epics. He got gold fever on The Yellow Mountain in 1954 and was The Man from Bitter Ridge in '55. He was the Deerslayer in Deerslayer in 1957 before War Drums. 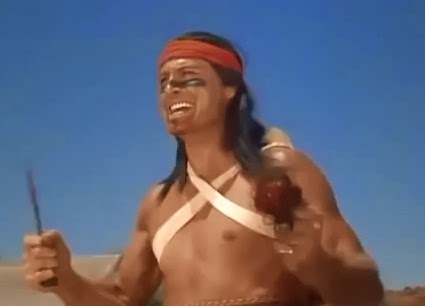 Lex on the warpath, with scalp
As for his co-star Ms. Taylor (Joan, not Liz), she made her film debut in a Western (a Randolph Scott oater, Fighting Man of the Plains, 1949), so respect. She was also in The Savage with Charlton Heston in 1952 (less respect). You may remember her for being Milly Scott in The Rifleman. She was in episodes of several other TV Westerns too. I’m sorry to say it, but she was frankly ridiculous in War Drums. She plays a half-Mexican, half-Comanche woman serving as a slave for some white-trash scumbags before being taken by Mangas Coloradas for a wife. However, instead of building wikiups and tanning hides she becomes a warrior in an Apache bikini. You gotta laugh. 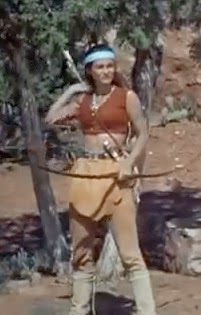 Mrs. Mangas
The story is in fact about Mangas Coloradas, Red Sleeves. He is a noble warrior chief who, Broken Arrow-like, (all Westerns about Indians in the 1950s had a similar plot) is statesmanlike and ready to bury the hatchet. The white trash do their best to make war. There’s always a noble white man who sees the bigger picture and does his best to preserve the peace. That’s Ben Johnson in this one. He’s a trader who later joins the Union Army (like Lex, he becomes a major). It’s set in 1860 and 1861 (though they all seem to have 1873 model Winchester repeating rifles). Mr. & Mrs. Sleeves are noble and brave and obliged to fight and do so with aplomb.


The real Mangas Coloradas or Dasoda-hae ("He Just Sits There"), was born c.1793 and died in 1863. He was one of the greatest, if not the greatest Apache war chief. He did most of his fighting against the Mexicans and got on passably well with the American whites at first, respecting them as defeaters of the hated Mexicans. But the film has it right in one respect: it was the influx of gold prospectors and miners that caused the peace to break down. According to John C. Cremony's book, Life Among the Apaches, near Pinos Altos mining camp in 1851 Mangas was attacked by a group of white miners who tied him to a tree and severely flogged him. This scene (which may in fact never have happened) is shown in the film. 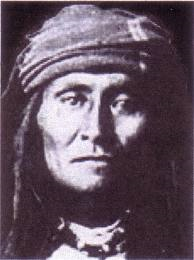 The great Mangas Coloradas
In 1861, after the disgraceful Bascom Affair (which is not mentioned), Mangas allied with his son-in-law Cochise in trying to drive all Anglos out of Apache territory. In 1862 Mangas did indeed (as shown in the movie) receive a bullet wound in the chest. What is not shown (the movie ends with Major Ben Johnson escorting Mangas and his party to the safety of the mountains) is the final end of the chief: in January 1863 Mangas decided to meet with Army chiefs at Fort McLane in New Mexico, and came in under a white flag to speak with General Joseph Rodman West. The odious West gave orders for Mangas to be arrested and allegedly said, “Men, that old murderer has got away from every soldier command and has left a trail of blood for 500 miles on the old stage line. I want him dead tomorrow morning. Do you understand? I want him dead.” That night Mangas Coloradas was tortured and then shot dead. The following day, U.S. soldiers cut off his head, boiled it and sent the skull to a phrenologist in New York City. As may be imagined, this dishonorable and cowardly murder only intensified enmity between the peoples and the Apache wars continued bloodily for another quarter of a century. 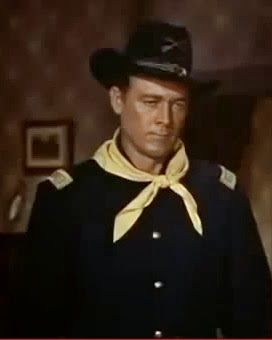 Major Ben
The writing of the movie is by Gerald Drayson Adams who started on B-Westerns in 1948 – he did another couple of Apache one in 1952 and ‘54, The Battle at Apache Pass and Taza,Son of Cochise – but to give you an idea of the writing, Ben Johnson has to say the line “It’s quiet. Too quiet.”


So not the greatest of oaters, I fear.


Still, it is a color Western with Ben Johnson in it, so let’s not knock it too much. Plus, there’s a judge in with a derringer. 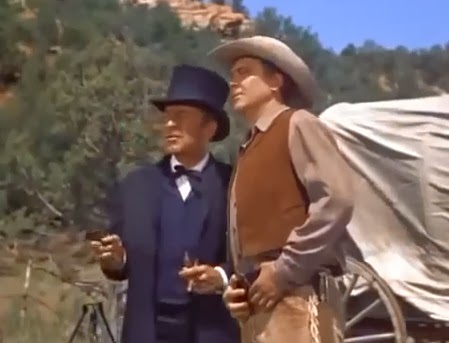 Judge with derringer. Ben tells him, "You better put that pea-shooter away, Judge. They're friendly."