Cecil B DeMille made lousy Westerns. There’s a good generalization for you. But like most generalizations, it has its basis in truth. DeMille was one of the earliest pioneers and directed the first version of The Virginian in 1914 and The Squaw Man the same year (and he remade the latter in 1918 and yet again in 1931). The Girl of the Golden West (odd as a silent) followed in 1925. When talkies came in he directed Gary Cooper as Wild Bill Hickok in The Plainsman in ’36 and Coop again in North West Mounted Police, a silly Mounties melodrama, in 1940. All these movies showed DeMille’s “penchant for leaden exposition and turgid melodramatics,” as my guru Brian Garfield put it. I especially dislike DeMille’s hatred of location shooting and construction of enormous sound stages which are always false, and his murderous and cruel way with horses in stunts (he would kill several in order to get the shot he wanted).


But far and away his best Western, and one that is still fun to watch today, is the 1939 Union Pacific. 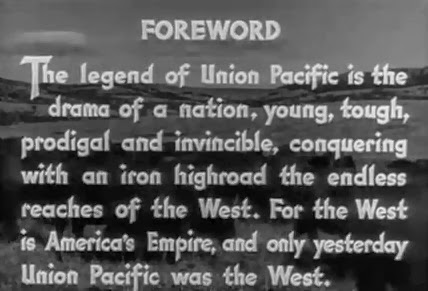 Nation-building Hollywood
1939 was of course the year of Stagecoach and DeMille followed John Ford in several ways. By accident or design, there’s even the same shot of the revolver aimed at the head of the lady to save her from a fate worse than death at the hands of the Indians (John Carradine as Hatfield prepares to shoot Louise Platt as Mrs. Mallory in Stagecoach; Joel McCrea takes aim at Barbara Stanwyck in Union Pacific; both ladies are saved by a last minute deus ex machina sound, a cavalry bugle/train whistle). Actually, DeMille may not have not have known that John Ford himself stole the idea from his brother Francis Ford in his 1912 picture The Invaders. 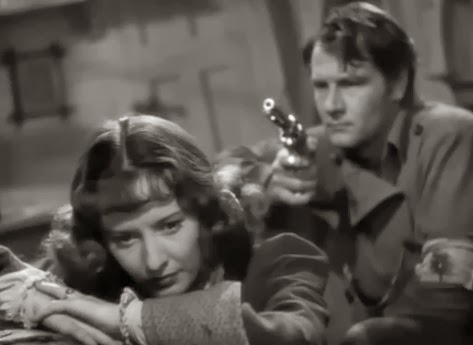 Will he shoot her? As if.
DeMille also borrowed heavily from Ford’s The Iron Horse of 1924, using many of the ideas and even some of the footage (in rather clunky back-projection). The themes of The Iron Horse and Union Pacific are the same: the great 'manifest destiny' one of spanning the continent with the iron road, for the greater glory of the construction of what is explicitly called the American Empire. The movie opens with the famous titles that George Lucas borrowed for Star Wars (though with a chirpier orchestral folk-song suite than Mr. Lucas employed) as the rails disappear into the distant West. 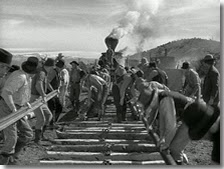 Iron Horsey
McCrea was the choice for lead, with la Stanwyck, although at first McCrea told DeMille he'd be better off with Gary Cooper, and Coop had been slated for the part as far back as '36. But Coop was otherwise employed and McCrea accepted. McCrea was no Western specialist (yet). He was third-billed in the San Francisco melodrama with Edward G Robinson Barbary Coast in ’35, a semi-Western at best. But more significantly, in 1937 he had the lead in another big Manifest Destiny costume drama, Paramount’s Wells Fargo, directed by Frank Lloyd, and so faute de Coop he was ideal for the Union Pacific part of troubleshooter Jeff Butler, tough gunman for the railroad, keeping the bandits and Indians at bay. 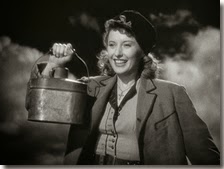 Stanwyck doing her chirpy colleen act
Barbara Stanwyck was lousy in Westerns. Oops, another generalization. Oh well. She started as Annie Oakley in 1935, directed by George Stevens, and it was a hit. Union Pacific was her second oater. Later she specialized in the Western grande dame "I own the whole valley" roles such as in Cattle Queen of Montana, The Violent Men or the trashy Forty Guns and of course The Big Valley on TV. Union Pacific was one of her better Westerns (probably her very best were The Great Man's Lady and Trooper Hook, both also with McCrea), even though she did put on a very cod ‘Irish’ accent for it. She was still - just - young enough (30) and effervescent enough to be the colleen Mollie, though it was touch and go…


Together, McCrea and Stanwyck were OK and Union Pacific just about works in that regard. 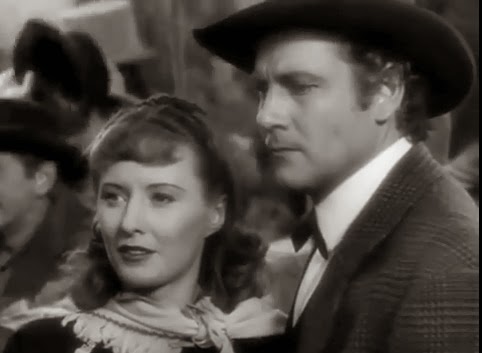 Stanwyck trying not to do her grande dame act, McCrea dignified as ever
Robert Preston made a certain role his own, that of the charming-rogue best friend, and he does it again here. Blood on the Moon, Whispering Smith, The Sundowners, watch them and you’ll see what I mean. Preston was full of beans and is always fun to watch. He adds vim to a Western. He and McCrea are of course rivals for the hand of Ms. Stanwyck. The only trouble is, you know perfectly well at the outset that Preston’s character is going to perish, delivering wry but friendly last words to the hero, and the hero will waltz off with the gal. One good thing: Preston has a derringer. 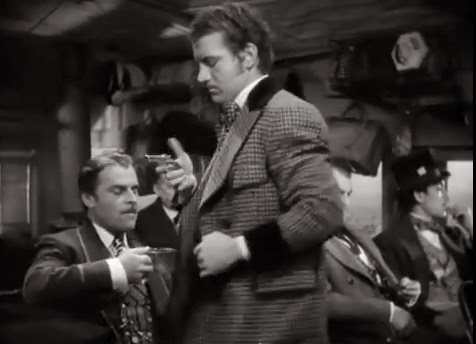 Preston with derringer. That's Donlevy on the left and Quinn on the right.
Brian Donlevy was – I almost said it. But no, he wasn’t lousy. He was very poor in certain Westerns - any Western, in fact, where he had to strap on a gun and ride a horse. See him and cringe in Cowboy, the 1941 Billy the Kid, as a weak Grat Dalton in When The Daltons Rode and an equally bad Trampas  (in fact the worst Trampas ever) in the 1946 The Virginian. But there was one place where Brian Donlevy was supremely good, in his element in fact, and that was in a saloon. Give him a frock coat, some henchmen and nefarious motives and there was none better. One thinks principally, of course, of Destry, also in 1939. But in Union Pacific too he is superb as the oily villain in a fancy vest. He started off as Edward G Robinson’s henchman Knuckles, in a saloon of course, in Barbary Coast and was a ne'er-do-well gambler in Canyon Passage in 1946. 1939 was a busy Western year for him: he was in Union Pacific, Destry Rides Again, Jesse James, and Allegheny Uprising.


There’s a nice little role for Anthony Quinn as the evil top-hatted gambler Cordray, and Fuzzy Knight is less silly than usual as another saloon heavy, Cookie. There are uncredited bit parts for Ward Bond and Will Geer working on the railroad. Lon Chaney’s there too. 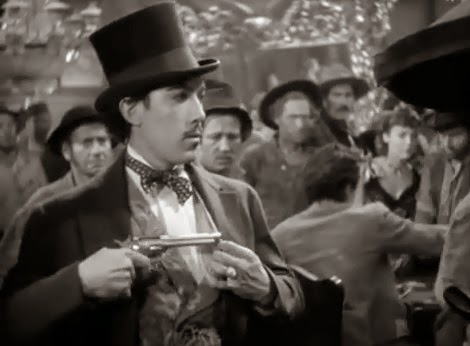 Quinn: he was just so good
It’s a big production with two notable train wrecks. These days Westerns can’t even afford a train at all, never mind wreck two. There are Indian attacks and gunfights and fisticuffs and mucho galloping. Sadly, some of the 'galloping' is (typically for DeMille) done on those fake horses in the studio with back-projection. Oh well.

Much of the early part, in Washington, as the politicians argue over the construction of the railroad, could have been done away with but once the action gets going and handsome Joel McCrea with his two pistols (worn Coop/Wild Bill style, butts forward) has boarded the train, the action moves along nicely and unusually briskly for DeMille. In fact he was taken ill during shooting and stand-ins directed much of it. Perhaps that’s why it’s better than his usual efforts. 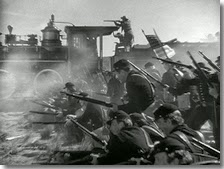 Action-packed
The writing is another reason for the film’s quality. It was adapted by Jack Cunningham from an Ernest Haycox story. Cunningham had adapted a lot of Zane Grey stories for Paramount’s series with Randolph Scott in the 30s and had also worked on The Covered Wagon (in some ways 'the' manifest destiny Western). He suffered a stroke during the shooting of Union Pacific, in fact, and was never well afterward.


Of course there is the climax of the driving of the golden spike at Promontory Point, with the simultaneous personal climax of a gunfight between the good guys and the bad guys. 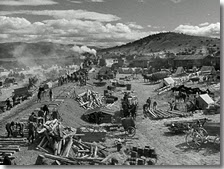 The big picture
The picture was a monster hit and opened in Omaha to huge crowds and much hullabaloo, McCrea and Stanwyck arriving on a special train from California.
It's very long (2 hours 15 minutes) but doesn't drag.


I always enjoy this movie and this and The Plainsman are probably the only DeMille Westerns where I can say that. The Plainsman would be unwatchable without Coop anyway. Union Pacific deserves a place in the roster of big nation-building Westerns and stands alongside Wells Fargo, Western Union, silents like The Iron Horse or The Covered Wagon, or early talkies like The Big Trail. It’s obviously bosh historically (all DeMille was, even though in this case he enlisted the support of the Union Pacific for research) but when did that ever stop us enjoying a Western?


Definitely worth a watch. It has something.

By the way, because of the success of Union Pacific, DeMille asked McCrea to do his next Western, North West Mounted Police in 1940, but this time McCrea turned the tables and said no, so DeMille gave the part to Coop.

McCrea had kind things to say about DeMille. "He was a showman, like PT Barnum, and I enjoyed working with him. … He once told me, 'The critics don't like my pictures but the public do.' He was right."