Arthur Hunnicutt as scout, Jim Davis as sheriff and Leo Gordon as heavy - so you can't knock it too much

Made-for-TV Western films in the 1970s were the B-movies of their day. They were popular, usually anodyne and rather bland. The Trackers, produced by Aaron Spelling and Sammy Davis Jr., did try to get a simple message across, did try to say something. But it’s all pretty safe and sanitized. US Marshal Davis, Jr.
It had some good stars. Sammy Davis Jr. played a US deputy marshal who has to face racial discrimination and manages to overcome it (that’s the message). Davis was no Western specialist but had been in episodes of thirteen TV oaters, notably The Rifleman, and a couple of these TV movies. His only feature-film Western was the pretty grim John Sturges-directed ratpack movie Sergeants 3 of 1962 with Sinatra, Martin and Lawford. Still, he was a big name. Ernest Borgnine, much better known to Westernistas, was co-lead (the year after The Wild Bunch and two years before The Revengers) and his wife in the movie was played by Julie (aka Julia) Adams, well-known Westerner (Bend of the River, The Man from the Alamo, The Lawless Breed, Horizons West, others). Iowa-born Ms. Adams essays a Southern accent that would have been better not attempted (she calls her husband Sam Say-yam) but overall she is is OK I guess. Ernest
Jim Davis is the pusillanimous and bigoted sheriff who brings along on the posse the (incompetent) old scout Arthur Hunnicutt. Sadly, Arthur is written out very rapidly. Still, the cast is there. Jim's horse looks a bit worried. Arthur just looks glum.
Better still, we have Leo Gordon as heavy (of course). Leo was 6’ 2”, and 5’ 5” Sammy looks rather comical alongside him at the bar. Leo’s boss is a rather camp Caleb Brooks as English bandit chief El Grande, his only film as far as I know. 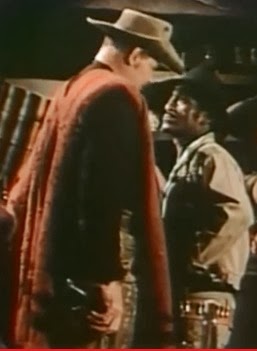 Yet Sammy knocks Leo out. Funny, that.
The writing (Gerald Gaiser et al) is grade-school level. It’s one of those scripts where the characters use each other’s names amazingly often, indeed, are incapable of addressing each other without doing so - for the benefit, I suppose, of the TV audience with the attention span of an amnesiac flea, saying Who is she again?


Given the characters and plot, the script really called for liberal use of the n-word but of course that would not do for 1970s TV. Most of the time they use the dot dot dot technique, e.g. “I never thought he’d send a dirty …” (turns away), allowing you to fill in the imagined racial epithet yourself.


Bad guys (at first they are said to be renegade Army deserters, then Indians) kill Ernest & Julie’s son and kidnap their daughter, so Ernest and Sammy set off, first with a posse then finally alone, to rescue the girl. The parents don’t seem to mind too much about the dead son.


Earl Bellamy directed. He worked on no fewer than 171 Westerns, B features to begin with but then mostly TV shows – he did episodes of pretty well every TV Western you can think of.


It all climaxes after 70 minutes in a not-bad shoot-out and escape. I guess it was The Missing, 1970-style.


You don’t really need to watch this.