In 1987 NBC aired a TV movie called Desperado inspired in some way by the Eagles song (at least the song played as intro and over the end titles) and the film wasn’t bad according to its lights, as far as 80s made-for-TV Westerns go anyway (and they were no worse than the B-Westerns of yore). It had some popular stars to back up the fairly unknown hero (Alex McArthur): Robert Vaughn, Pernell Roberts and, er, Gladys Knight. The ratings were good enough to warrant a sequel – indeed, four sequels, the first of which was The Return of Desperado. 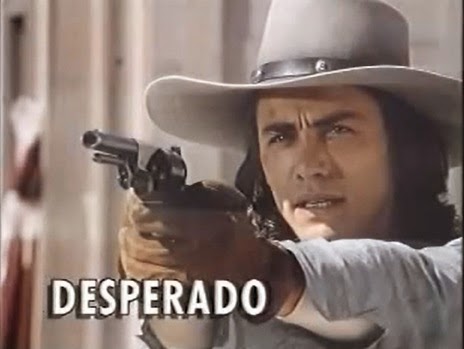 Once again, it’s not bad. It does have a stodgy, slow start and it takes some time to get going but the action is pretty good once it finally gets into gear. Sadly, though, no big stars were present. The acting is a bit mediocre and many of the cast’s clothes are obviously costumes, if you know what I mean.


Our hero Duell McCall (McArthur) is still seeking the man who can clear his name of murder. This fellow always leaves town just before Duell gets there. And before rushing off after his quarry, Duell is obliged to hold on and right some wrongs first. He also has to fall for a girl, of course, and that takes time.


On this occasion he rides into the New Mexico town of Beauty (somewhere south of Albuquerque) which is run by a crooked and brutal town boss, Capt. Dryden (Robert Foxworth) and his henchmen. They are ex-Union soldiers hired by the town to keep order but in fact running a scam to rob the townsfolk of their wealth by falsely telling them that the railroad is coming. Meanwhile, the scoundrelly captain is buying up land where the railroad is really being routed. But that’s land destined for a group of black settlers anxious to form a “colored” community. So far, so conventional. 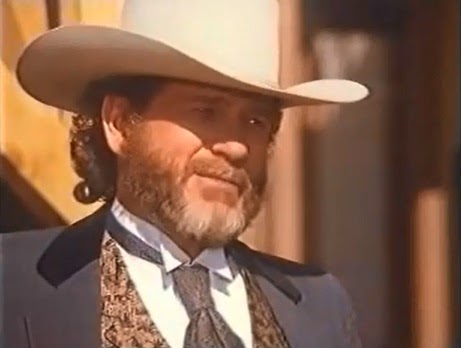 The villain
It’s nicely shot around Santa Fe and Tucson and the picture looks good.


Our hero hesitates between a black girl and a white one, opting for the blonde in a love scene – tasteful, of course; we are talking TV movies here. I’m not quite sure of the names of these female players; the credits are poor and IMDb doesn’t help. One of them is Vanessa Bell, I think, though not Virginia Woolf’s sister – pity, I was looking forward to seeing her in a Western.


Duell has an enormous horse pistol, a hefty Henry and a great dagger in his boot. He looks like a one-man army.


There’s a good shoot-out in the final reel. Then we get the song again.

Amazingly, Elmore Leonard gets a credit but it isn't based on any of his books and I am not quite sure why. 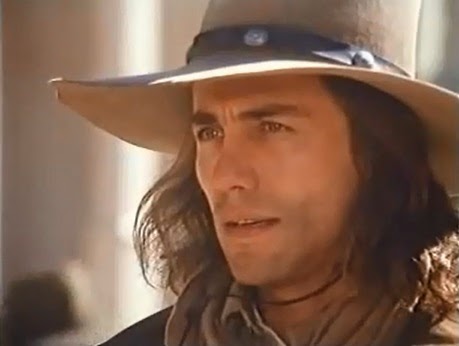 The hero
I have a feeling that in the third one he’ll come close to finding his man but will get sidetracked, righting some wrongs.