In 1950 Audie Murphy signed with Universal for seven years. He made three Westerns in 1950 (Kansas Raiders, Sierra and The Kid from Texas), none in 1951 and The Cimarron Kid came out in 1952. Murphy’s baby face made him ideal for ‘Kid’ roles, whether they be from Texas or on the Cimarron, and in fact in the third movie he was Billy the Kid. He was also The Silver Kid later in '52.


The Cimarron Kid is noteworthy as being a Doolin/Dalton film and as being the first (proper) Western directed by Budd Boetticher.


Films about the Doolin-Dalton gang are fairly thin on the ground, though there are a few. See here for more on the Daltons in fact and fiction. Even rarer is a film about these outlaws that is even remotely close to historical fact. This one is complete balderdash from start to finish. Still, it’s fun, and since when did we watch Hollywood Westerns for a history lesson?


Budd Boetticher is a Western fan’s Western director, as his CV shows. He’d been an uncredited director’s assistant to Charles Vidor on the 1943 picture Desperadoes, a Randolph Scott oater produced by Harry Joe Brown and also starring a young Glenn Ford, and he directed a Mounties/fur trapper semi-Western in 1949, The Wolf Hunters. 1952 was a good year for him, a time when he really cut his Western teeth, because as well as The Cimarron Kid he also directed a rodeo picture, Bronco Buster, and the Robert Ryan/Rock Hudson drama Horizons West. 1953 was also a good year: he directed Van Heflin in Wings of the Hawk, Glenn Ford in The Man from the Alamo and Rock Hudson in Seminole. He went on to work with Scott on that excellent series of late-1950s movies with Randolph Scott, starting with Seven Men from Now in 1956. He directed four episodes of the first Maverick series on ABC and very good they were too, as well as several Zane Grey Theatre shows. His last Western as director was A Time for Dying, 1969, with Audie again, this time as an older Jesse James (though in little more than a cameo performance). Boetticher’s was an excellent career and one which Western fans admire. 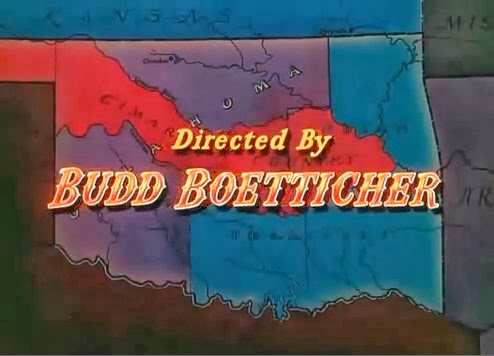 Budd the Great
But let’s get back to The Cimarron Kid. It starts off with a neat, respectable, besuited young man being advised by the kindly prison governor about keeping to the straight and narrow now that he is to be free. It must have been a very nice prison because Frank Ferguson (tragically uncredited) is the avuncular warden. 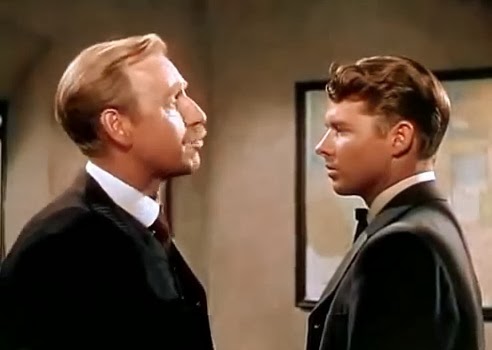 Avuncular warden Frank counsels the Kid
Young Cimarron declares that he will indeed go straight and sets off for his new life but wouldn’t you just know it, the very train he travels on is held up by his pals the Daltons. And one of the gang, Red Buck (Hugh O’Brian in a shock red wig and beard) blurts out that Kid is a friend, so of course the passengers think he’s in on the robbery and want to lynch him. He is thus obliged to escape and join up with the gang. Ah, cruel fate.


It’s the day before Coffeyville and Kid joins Bob Dalton’s crew. Bob is the excellent Noah Beery Jr. (though he was dropping the Jr. these days). Always first class in any Western, Noah adds quality to this one too. Of course it’s all hooey. They only attempt one bank in Coffeyville (another in Independence) and there are some very odd Daltons. The main ones seem to be Dynamite Dick Dalton (John Hudson) and Bitter Creek Dalton (James Best). For most of the movie I thought he was named Peter Krieg but it was because I saw the film in French and the voiceover-actors’ English pronunciation wasn’t too good. Anyway, it’s not Bitter Creek Newcomb but he has joined the Dalton clan. There’s also a kid brother, Will Dalton (William Reynolds). Around somewhere but uncredited and not playing any serious part in the drama are Grat (Gregg Palmer) and Emmett (Rand Brooks). There’s no sign of Bill Dalton (the real link between the Dalton and Doolin gangs). Really, it’s a most unusual line-up of Dalton brothers. 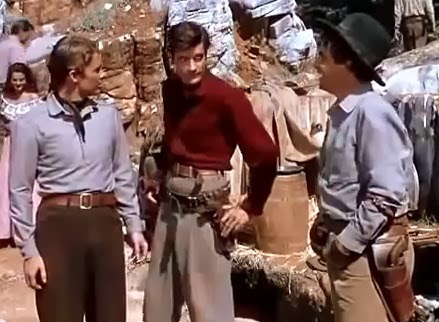 Audie as Doolin and James Best and Noah Beery as Dalton brothers.
Jim Best was nominated for the Worst Pants in the World award that year.
Anyway, Bill Doolin (for the Cimarron Kid is Bill Doolin, you see) reluctantly pillages express offices, trains and banks all over Oklahoma, and falls for a girl (Beverly Tyler). Really he wants out and to go to Argentina and start a ranch with Beverly and live HEA. But he needs that stake to do it, so continues robbing.


There’s a good bit in a railroad roundhouse as Peter Krieg’s Mexican-looking gal Cimarron Rose (Yvette Duguay) winches the turntable round while lead flies.
There's another good bit in which Cimarron and Red Buck have a quick draw against each other and Audie wins with a tea cup.

How to beat a quick draw - if it's tea time


Well, we all know how Bill Doolin finished: 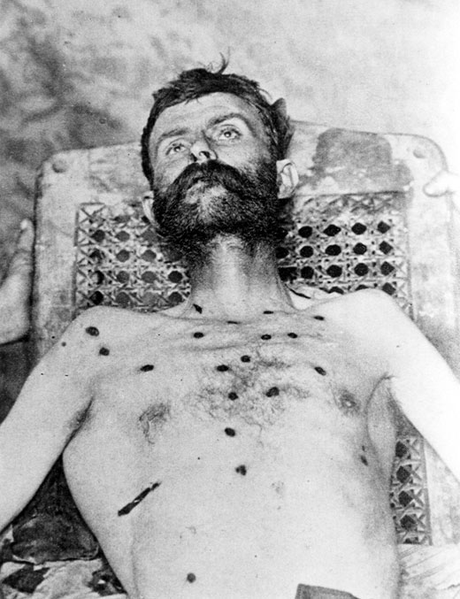 Ow.
But the Audie Bill Doolin is turned in by his girl, realizes the good sense of this and they swear they’ll wait for each other and be happy when Bill gets out (probably after 99 to life considering what he has done).


So you see, you ought not to watch this film for a true account of the career of the Dalton or Doolin gang. 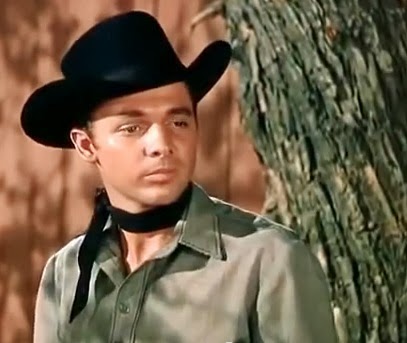 Bill Doolin, 1952 style
Still, you might watch it if you are an Audie fan. Or even if you like fun 50s Westerns with mucho action and some of those lovely Universal locations and classy color photography. It’s Charles P Boyle behind the camera, a much better than average photographer, and Tuolumne County, Cal. stands in nicely for Oklahoma. It’s a Boetticher Western. And you get Best, O’Brian and Beery. Come on, what more do you want?