The 1963 book Monte Walsh by Jack Schaefer is one of the great Western novels, and the 1970 film that was made of it, starring Lee Marvin and Jack Palance, was really very good. Book and film influenced a lot of people, among them Western aficionados such as actor Tom Selleck and writer Robert B Parker.


Tom Selleck is probably best known for Magnum PI, though I only really liked his car in that. He is, however, an admirer of and significant contributor to the Western genre. After a couple of small parts in Lancer episodes, he came to Western prominence in 1979 as Orrin in The Sacketts, the made-for-TV adaption of Louis L’Amour’s novels. Other Western TV movies followed, The Shadow Riders (1982), the contemporary rodeo picture Ruby Jean and Joe (1996), Last Stand at Saber River (1997) and Crossfire Trail (2001). They were increasingly good – well-made and well-acted. Probably his biggest Western, though, was the feature film Quigley Down Under in 1990. It was an excellent movie and Selleck (replacing Steve McQueen who was too ill) was outstanding in it. Quigley and Crossfire Trail were directed by Lonesome Dove man Simon Wincer and it is clear that the collaboration worked. They got together again for a new Monte Walsh in 2003, Selleck as producer as well as in the title role. 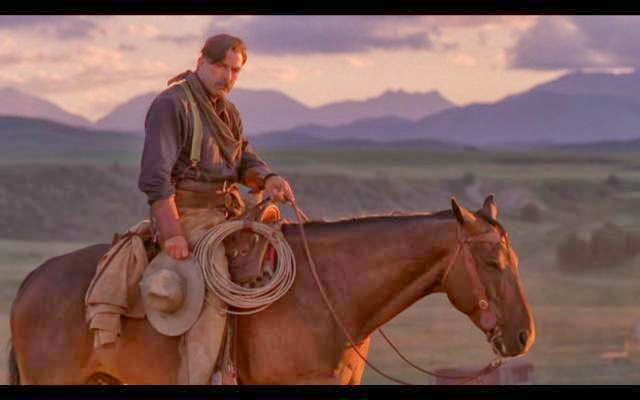 Selleck is Monte Walsh
The late and much-missed Robert B Parker is chiefly known as writer of hard-boiled detective dramas and police procedurals, and indeed, since 2009 Selleck has been Jesse Stone in five movies. But like Elmore Leonard, Parker crossed over often into Western fiction, notably with his fine series of Cole & Hitch novels, starting with Appaloosa in 2005 (made into a good movie by Ed Harris in 2008). He too was a great admirer of Monte Walsh and worked with Selleck on the new version. He wrote the teleplay with Michael Brandman, who wrote for Selleck in the Jesse Stone mysteries as well as Crossfire Trail and Last Stand at Saber River.


When you watch it, the first thing you notice right away is that it is not so much a new version of the book as a remake of the 1970 movie. Yes, it adds a couple of episodes from the book that the 1970 film didn’t but it adopts the plot changes of 1970, notably and unfortunately the murder of Chet, continues with some of the invented characters, and some of the Goodman/Heller (non-Schaefer) dialogue is identical.


The other thing you notice, though, is how good it is. The movie is a respectful and affectionate tribute to book and earlier film. The production values are very high. The direction and acting are top class.


The setting has been moved from New Mexico to Wyoming, perhaps because the Calgary locations where it was shot resemble Wyoming more than they do the Southwest. They are very beautiful, anyway. I thought some of the scenes were the Grand Tetons at one point. David Eggby was behind the lens, as he had been for Wincer on Quigley in Australia and Crossfire Trail, also in Alberta. Visually, it is fine and Wincer and Eggby have real talent. Just occasionally they slip over into picture-postcard sweetness but in such an elegiac ‘sunset’ picture as Monte Walsh it works perfectly. The look of the picture is enhanced by the fine authentic costumes and props, as the 1970 film had been (2003 production design by Rick Roberts, costumes by Michael T Boyd).


What about the acting? The first thing to say is that Mr. Selleck is a very good Monte. Lee Marvin was a hard act to follow and perhaps Selleck hasn’t quite got the charisma of Marvin but he is still very convincing. He does the leather-tough cowpuncher with a twinkle in the eye with charm and skill, and he delivers Monte’s “My, my” most amusingly (though unfortunately we don’t get any Shucks). Much as I loved Jack Palance as Chet in 1970, I thought Keith Carradine was even better. There are actually two members of that noble dynasty in the movie (as there were in Saber River) because Robert Carradine plays Sunfish Perkins. 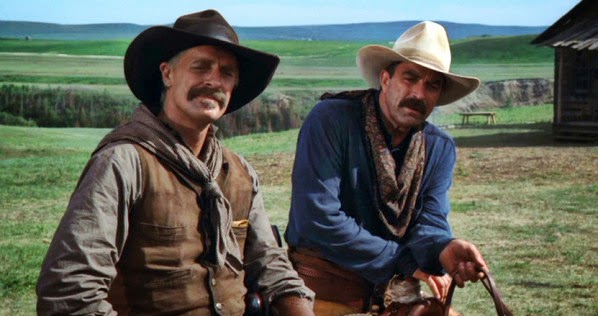 Keith Carradine as Chet - outstanding
The Jeanne Moreau part of Martine (Hattie in the book) is taken by Isabella Rossellini. She is again called Countess by Monte (“I thought all you foreign women was countesses”) although Monte slightly spoils the effect by pronouncing it cowness. Now, I am sure Ms. Rossellini is heartily sick of the comparison but sorry, I can’t help it: when she smiles she looks so like her mother (who was, as we all know, the most beautiful woman in the world) that my heart just melts. And the first time we see her, when Monte first visits Martine, that smile illuminates the screen, the theater and our lives.


William Devane is Cal Brennan. The highest compliment I can pay is to say he was as good as Jim Davis in 1970. He hasn’t, sadly, done many Westerns, though he was in a couple of Gunsmoke episodes and was very good as the political lawyer in McCabe & Mrs. Miller. 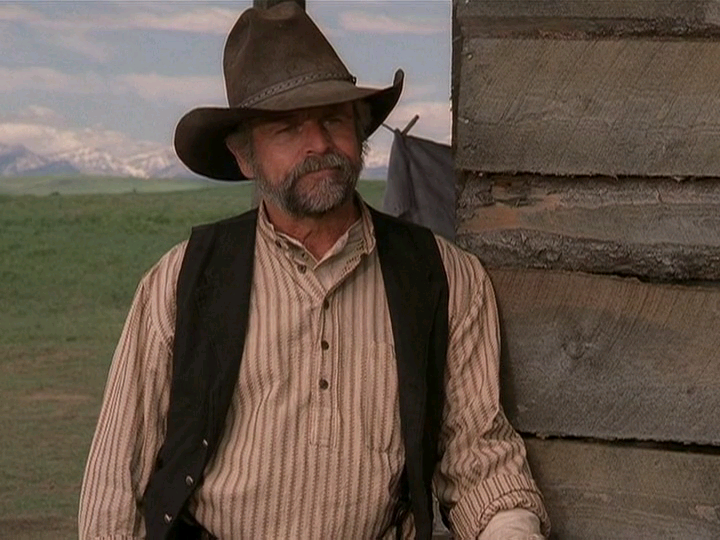 William Devane in the Jim Davis part of Cal Brennan
Some of the smaller parts are very well done too. The ‘Fighting Joe Hooker’ role from the 1970 screenplay is continued and actually improved because it is played by the excellent James Gammon, who, until his sad demise in 2010, became the standard and very high quality old-timer in Westerns, rather as Walter Brennan had been. In Wyatt Earp, Silverado, Appaloosa and many, many others he was first class. Similarly, Barry Corbin as the fly-swatting storekeeper Bob is a colorful character actor of great charm, and just right in the part. I think of him particularly for Crossfire Trail and of course Lonesome Dove. Wincer stock company again.


George Eads is very good indeed as Shorty Austin. It’s his only ever Western as far as I know. Absolutely outstanding is William Sanderson (EB Farnum from Deadwood, Lippy from Lonesome Dove) as Skimpy, the cook. The excellent Marshall Teague (Snake Corville in Crossfire Trail, he is to have a leading part in next year’s biopic of John Wesley Hardin) is Dally. 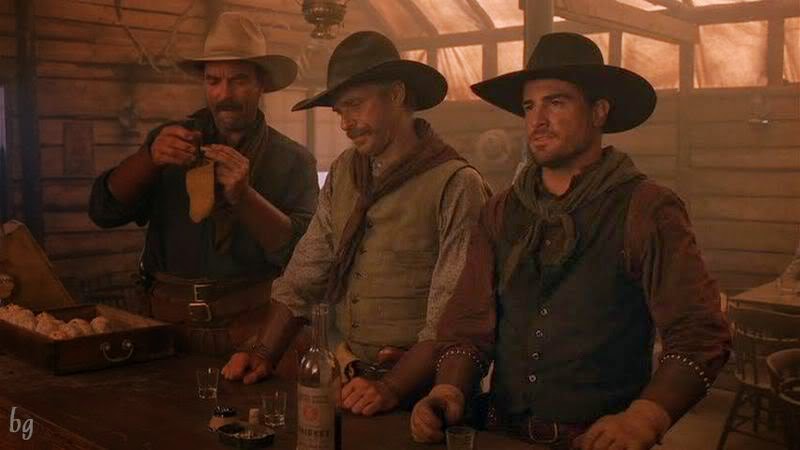 George Eads as Shorty Austin: he should do more Westerns
All the acting is really very good.


When reviewing the book, I talked about the automobile as symbol of the end of the West. Many movies took this up and Sam Peckinpah in particular often used it. The 1970 version of Monte Walsh didn’t have that but Selleck’s does, and indeed, in the 2003 version the anonymous Eastern corporate interests (the only true villains in the story) actually appear, in the shape of ranch manager Robert Slocum (John Michael Higgins). In the novel, Monte, much in character, tows the auto out of the mud on his horse, thus demonstrating the superiority of beast over machine. Less in character but more amusingly, perhaps, in this movie, Monte leaves the car stuck and leaps over it, like John Wayne at the end of True Grit.


Another good addition is the train episode when the engineer stupidly frightens the herded mustangs into scattering and the cowboys take revenge by roping the smokestack and disabling the locomotive. It’s a great scene in the book and well done in the film.

The .45 Selleck used as Monte
This movie also starts with another episode from the book, the little boys throwing mud at the red door of the attorney, the lawyer kicking one of the children and Monte’s revenge. Of course this is a very well-known trope in Western movies: you often establish the goodness of the good guy in the first reel by having a bad guy beat a child or animal and the hero punish the malefactor. Watch out for it; in so many westerns you will see this. A nice touch is that towards the end of the movie we see the attorney again and he has become mayor. Ah, the world is changing – and for the worse…


It’s sad that there is no Dobe Chavez (he wasn’t there in 1970 either) and I would have had the Christmas Eve blizzard episode too. But you can’t include everything from a crammed 450-page novel in a 117-minute movie so we forgive them. 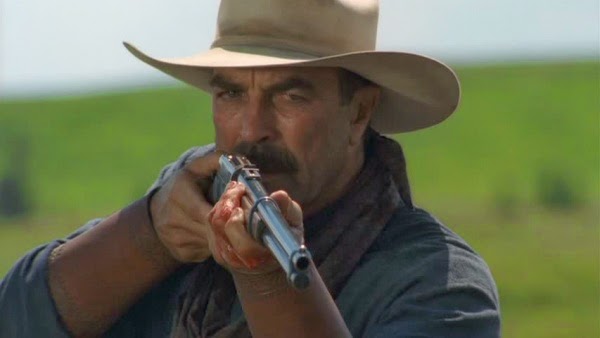 Less grizzled than Lee Marvin but perhaps more fun
When the US marshal is shot in the saloon and lands in the mud (another scene from the earlier film but not in the book) it suddenly reminded me of Jack Palance shooting Elisha Cook Jr. in another Schaefer story, Shane (and in its semi-remake Pale Rider, Stockburn shooting Spider). Maybe it was a deliberate quotation.


Perhaps the best scene of all is when the motor car passes and Bob the storekeeper and Cal the retired rancher spit in unison.