Bounty is probably one of those straight-to-video productions. Although movies are never a one man show, as this one was written, directed and produced by Jared Isham (and a certain Bruce Isham has a leading role), we can put the credit or blame down mostly to the Isham clan. High Plains Drifter meets Young Guns? I don't think so, sunshine.
Not that much credit, though, I fear. It’s a rather unoriginal story about a bounty hunter, Nate (Jarret LeMaster). The modern twist is that the outlaw is a woman, The Sparkle-Eyed Kid, played by Michelle Acuna, with very un-19th century diction. The bounty hunter and quarry fall in lerve, naturally. 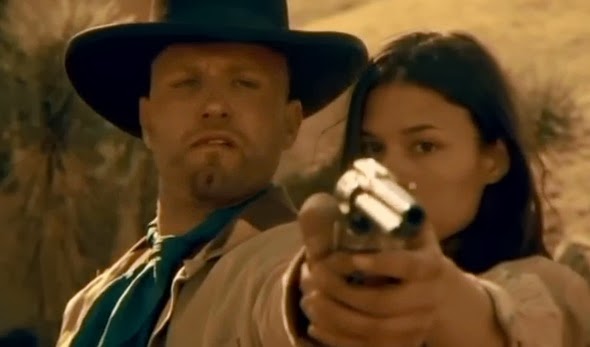 It's lerve as she teaches him to shoot a Colt
It’s a low-budget affair with indifferent photography, modest sets and the look of a made-for-TV movie.


The best thing about it is the evil sheriff, Charlie, played by the aptly named Steve Savage. He is very murderous and resembles the old British actor James Robertson Justice. He shoots two of the leading characters in cold blood and while they are unarmed and tied up, which is naughty. 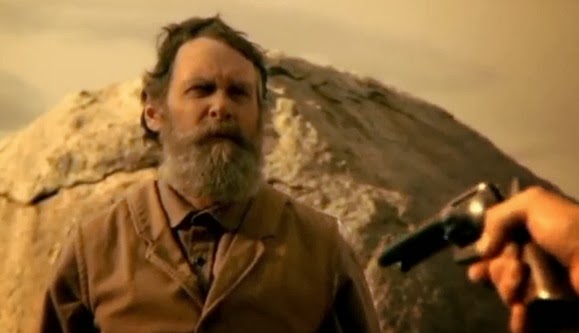 Cold-blooded murder
The sheriff turns out to be Henry Plummer. This is a little odd as Henry Plummer, lawman and outlaw, was hanged by a mob of Montana vigilantes in 1864, yet here he is in California sometime in the 1870s (judging by the firearms). Plummer was a very bad egg in Ernest Haycox’s 1942 novel Alder Gulch, and the excellent John Dehner played him in a Stories of the Century episode. But I don’t know of other occasions when he has appeared on the screen. 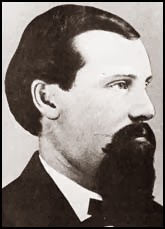 Henry Plummer (1832 - 1864), lawman and outlaw
The worst aspect of the film is the writing, which is very derivative. It contains lines such as “Justice? This is the West, kid. Think you’ll find justice here?”


The bounty hunter, his inamorata and his old-timer pard (Mr. Isham) escape the clutches of the evil sheriff and the hunters become the hunted, as a posse (numbering seven, obviously) pursue them. Oddly, however, all the trio do is rest. They pass long nights and dawdle in the mornings, hole up in a cabin, do some target practice, all while the posse are galloping towards them. Why is this? We are not told. Finally, the heroes are arrested (while resting). 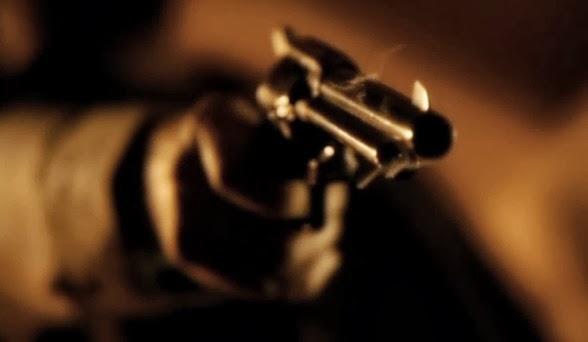 There’s a barman (Rodrick Goins) who is in thrall to the sheriff but who eventually stands up for right and takes over. The sheriff’s deputy (Jon Wyatt Davis) is rather good and almost as evil as the sheriff himself. He has a beard and a good look and his middle name is Wyatt so that’s all good.


The hero loses his horse (or maybe it was budget restrictions) and so he and the heroine have to walk off into the sunset in the final shot.

The print seems to have that modern, predominantly yellow tint which I don't care for much.


Bounty is alright, I guess, and I have seen worse, but you wouldn’t pine for it if you mislaid the DVD, and it would appear on no one's must-see Western list. 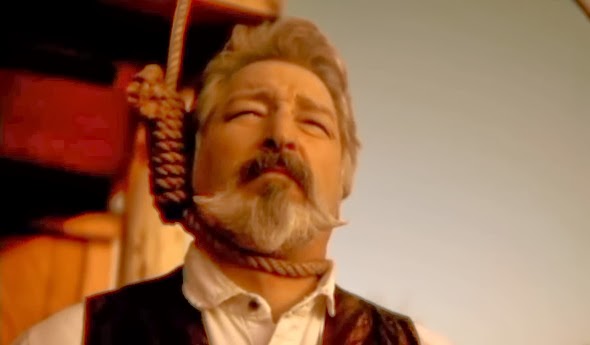 A taste of his own medicine.
See what I mean about James Robertson Justice?