Embassy Pictures was an independent film maker that had some big hits with non-Westerns The Lion in Winter, The Producers and in particular, The Graduate. The year before The Graduate, the company made a Universal-style Western, the sort of thing Audie Murphy would have starred in, An Eye for an Eye. It soon aired on TV (ABC) but is in fact a good B-Western.


It had excellent Western lead actors, not galactically stellar, perhaps, but to any Western fan a good cast: Pat Wayne played Benny Wallace, real name Pat Garrett Jr., bounty hunter son of the famous sheriff (he of course was to play that Pat Garrett in Young Guns in 1988). Slim Pickens was the chief heavy. His slimy sidekick was Strother Martin. And Paul Fix played the decent store-owner and paterfamilias. That’s a pretty damn good line-up by any standards. 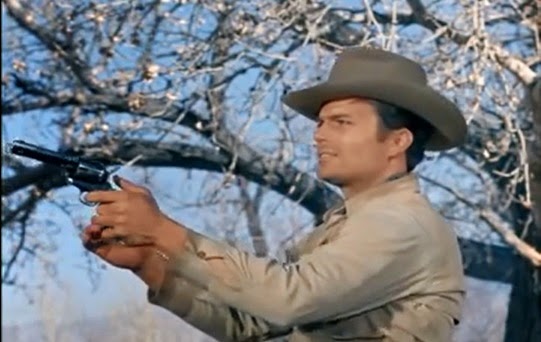 Pat Wayne
Lead, though, was Robert Lansing as Talion, the gunman seeking revenge on Slim for murdering his family. Lansing was not a top Western movie star. In fact, this was his only feature, though he was in quite a few TV Westerns. It’s a pity because he’s actually very good as the tough, laconic loner with a past. He also looks a bit like Steve McQueen. 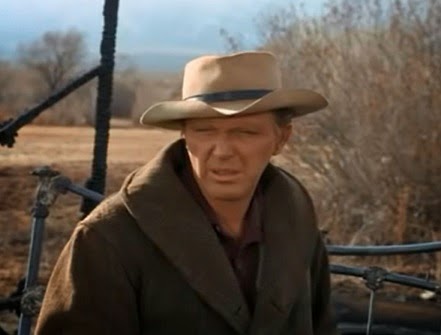 Robert Lansing
The picture has other merits. In particular, the visual. It was photographed by Lucien Ballard, no less, one of the greatest of all Western cinematographers. The Lone Pine locations are magnificent and in Ballard’s signature long shots and long shadows, they deserve to be seen on the big screen. 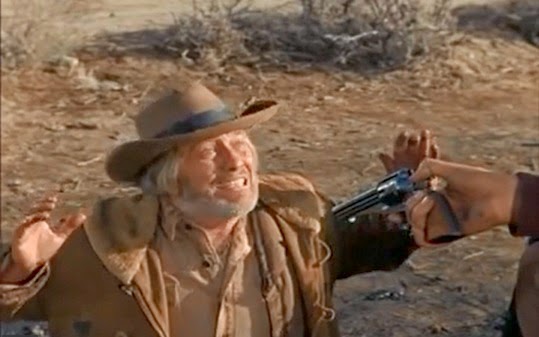 Strother
And the direction is pacey, tight and has the right mix of action and thoughtfulness. Admire, for example, how Slim Pickens’s loathsomeness is established in only the first sixty seconds of the film. In that time he manages to rape the absent hero’s wife, shoot her and their child and burn down their cabin with the bodies in it, all with an evil smile. Michael D. Moore was known as an assistant director (he later worked on the Indiana Jones movies) but did a solid job with this B-Western. 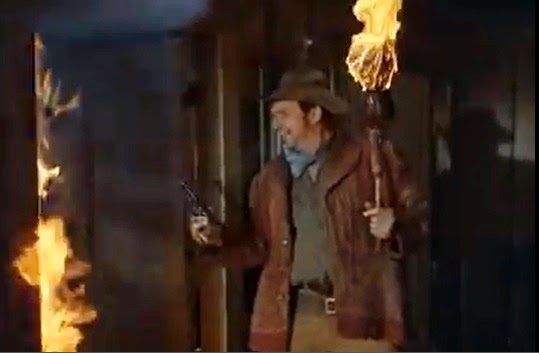 The great Slim Pickens being evil
Yes, the writing (Bing Russell and Sumner Williams) occasionally verges on the too-conventional (it is essentially the Nth revenge drama) but the plot is original enough to eschew banality: in an early shoot-out in a box canyon Slim manages, before escaping, to cripple Lansing’s gun hand and blind Wayne. So the two gunmen become a team, using Lansing’s eyes and Wayne’s gun. Lansing teaches Wayne to shoot blind. If this sounds silly, it isn’t; director, actors and writers manage to get it to work, and it leads to a tense final showdown.

Showdown
Wayne is (he always was) competent and earnest. Stuttering Strother is splendidly verminous (what a great Western actor he was). Fix is stolid, decent and fair. Slim is, naturally, brilliant. It was ’66 and he hadn’t quite yet put on so much weight as he was later to do. He was still convincing as a fast gun and of course was always superb on a horse. So the acting is really top notch. Fix’s daughter, who falls for Lansing, is Gloria Talbott. She was a stalwart of TV Western shows but had also appeared in a few features – The Oklahoman, The Young Guns (not Young Guns) and Cattle Empire. 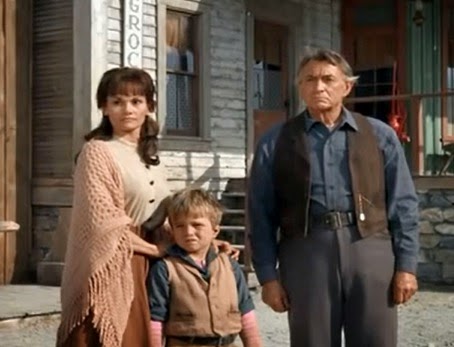 The Fix family. Doesn't the little boy look like him?
You should get to see An Eye for an Eye if you can. Don’t be put off by the appalling spaghetti-style whistling over the opening titles (“Whistling by Muzzy Marcellino,” we are told). Turn the sound down for the opening two minutes and just admire the Ballard scenery, smiling with anticipation when you see names like Pickens, Martin or Fix appear on the screen. 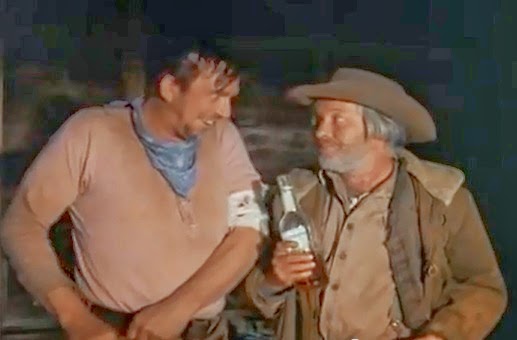 Having fun as the bad guys