I know what you’re going to say. You’re going to say, “The Last Samurai isn’t a Western. What’s it doing on this website?” That’s what you’re going to say. I know, I know, and of course you are right. It’s set in Japan, goldarnit, and is about swordfighters. But, but… It starts in the US. The US Army captain hero has been fighting the Cheyenne with Custer. It’s got loads of guns in it. It’s about a lone hero bravely fighting the forces of evil in a hostile terrain. Come on, that’s a Western. Then there’s The Seven Samurai after all. That’s virtually The Magnificent Seven in drag. So I’m reviewing it.


The trouble is, even if we accept that it’s a Western, it’s not that good. Oh, it’s big alright. Big budget. Cast of thousands, well, lots anyway. It’s all visually quite impressive. Expensive CG. The John Toll photog is very nice. Noble, swirling music by Hans Zimmer. And the theme is quite original and interesting: US Army experts hired by Japanese government to modernize Japanese army and defeat Samurai rebellion. (Actually, they were Prussians that were employed but never mind). Of course the hero comes to learn and love the ways of the Samurai. Falls for the widow of the Samurai he has bravely killed in single combat. Sons come to love him. You get the picture. 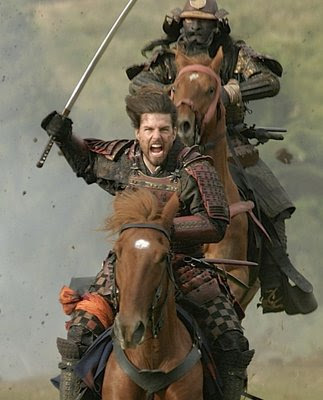 
The acting, however, is a bit ho-hum. Tom Cruise is the captain, Nathan Algren. He’s OK, I guess. Ken Watanabe is the main Samurai guy. Inevitably, one might say, were one being a tiny bit uncharitable. He’s pretty solid, craggy, noble, decent, brave, that kind of thing. He is based on the life of Takamori Saigo, a Samurai who rebelled in 1877. Then there’s Timothy Spall as a fat English photographer/journalist/translator. At least, I think he’s English. Unfortunately, I’ve only ever seen the movie dubbed into French, so it isn’t all that clear. Anyway, he’s quite amusing. And Billy Connolly is cast as a US Army sergeant (obviously). He perishes in the first reel but is quite entertaining up to that point. The rest of the acting is frankly forgettable.


The stunts are pretty good and there’s loads of blood and guts. Action galore, with swordfights and so on. A big battle. A bit of obligatory love interest, Koyuki as Taka. The IMDb website tells us that when Taka starts to undress for Capt. Algren there is a shot with her clothes slightly below her shoulders looking backwards. This is a homage to the Hishikawa Moronobu's ukiyo-e painting ‘Backwards beauty’. Fine. Happy with that. 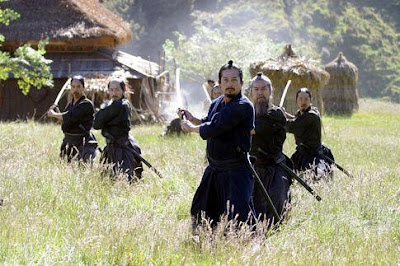 The Magnificent Six. I can just see the sixth peeking out behind the leader.


Japan is actually New Zealand and the hill village home of the Samurai is very attractive. Romantic, even.


Actually, that’s the main trouble with this movie. It gets frightfully sentimental, unbearably so at the end. When Cruise bows before the Emperor, who dutifully dismisses the bad-guy minister and honors the memory of Watanabe, it’s really treacly. Spielbergesque. Well, maybe not that bad but seriously patriotic and emotional. There’s always that side of Hollywood and it has spoiled many a good film.


The hero is slashed by swords, beaten, riddled by Gatling gun bullets and still somehow survives to get the gal. (The happy ending didn’t help). Anyway, if you’ll allow me, it’s a Western, I reckon. You didn’t have to read this review, after all.