Ideal movie for Thanksgiving. It's a turkey.

This is a dismally bad story of how Rangers Captain Spencer Tracy leads his men valiantly through all sorts of hardships in order to massacre some Abenaki Indians. It is preachy, overly patriotic, sentimental, absurdly false as history and, worst crime of all for a Western, boring.


Part of the trouble was too many cooks. Three people are credited as director, not only King Vidor. A whole regiment of Rangers seems to have been conscripted to write it. Laurence Stallings and Talbot Jennings are credited with the screenplay from the Kenneth Roberts novel and twelve others, including Vidor, contributed. There were even two directors of photography (William V Skall and Sidney Wagner).


There was a big budget as Louis B Mayer wanted this to be a major spectacle. It was Tracy’s first picture in color for MGM. Idaho locations represent New York State. As the title suggests, it was intended to be the first of a series but the moderate success and the costs mercifully spared us sequels. 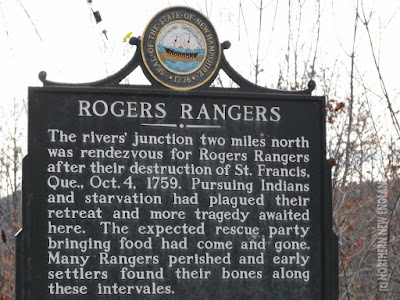 Well, I guess the Indians did pursue them


Robert Rogers’s prototypical Green Berets in their Rangers costumes look like nothing so much as Robin Hood’s merry men. You expect them to burst into song at any moment or hold up the Sheriff of Nottingham. 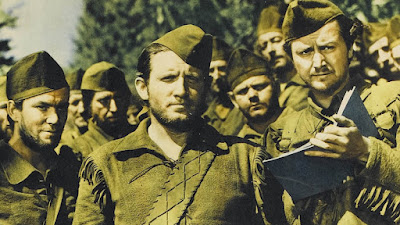 That must be Little John on the right


They burn down the Indian village, massacre all the men of fighting age, steal all the food they have left and cheerfully joke that anyone else can feast on roast Indian. So amusing. The Union flags and variations on ‘Hearts of Oak’ make it a very Brit film (although ‘Hearts of Oak’ did become an American song, ‘The Liberty Song’ by Philadelphia lawyer John Dickinson, so all bases were covered) and the French and their Indian allies are the enemy.


Most of the tale, however, is about the long retreat and the hardships they suffered. As such, the film moves at the turgid pace of the men staggering along on foot. 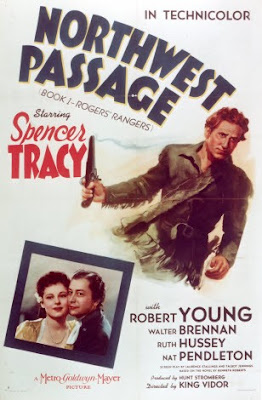 
The most famous scene was the human chain the men form to cross a treacherous river, filmed, without stunt doubles, in an Idaho lake and a tank in Hollywood.


Tracy is dynamic, of course, and suitable as the leader who drives them on to final safety. The rest of the acting is satisfactory at best. Walter Brennan has the worst teeth ever seen on film. He was already playing the crusty old fogey at 46. Robert Young is the posh artist who will go off to London with Ruth Hussey. The picture he paints of her in a book is hilarious. Pure 1940s.


They don’t even start out looking for the north west passage till the last 5 minutes of the last reel. Actually, it’s not even a proper Western (too early, too Eastern, too British) and I don’t know why I have bothered to review it on this website. One gun, gobble-gobble, watch out round Thanksgiving, it could appear on your table.