It'll make you chuckle here and there

There is a kind of plot. As with most comedy Westerns, there is some attempt to string the one-liners together. But exiguous is the word, I think. Exiguous. Rogue Cuthbert J Twillie (WC Fields) meets saucy Flower Belle (Mae West) on a train. La West must be married or run out of town by the respectable folk. She thinks Cuthbert is loaded (with money, I mean) and so decides to marry him. A gambler, an unusually racy Donald Meek, is mistaken for a preacher (an easy error to make) and performs the ceremony. Twillie somehow becomes sheriff of Greasewood as well as tending bar and gambling. The love affair becomes triangular when Zorro holds up the stage and kidnaps Flower Belle, who falls for him. And so on, you know how they do. 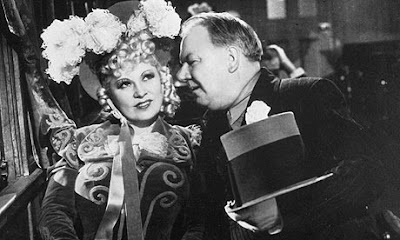 The not so happy couple...
Fuzzy Knight is usually in such films for the comic relief. Here, they ought to have had someone serious for the opposite. He is Cousin Zeb.


Actually, however, although Mae West gives us her extraordinary walk (all hips) and suggestive double-entendres and Fields gives us some famous lines (such as his last request when about to be hanged), overall it isn’t all that funny. When put in the league of great comedy Westerns such as Son of Paleface, the 1925 Go West or Blazing Saddles, it all falls rather flat.


The best thing about it is Joseph Calleia, who plays Jeff Baxter, the saloon owner and town boss, who is also – oh well, I might as well say (I don’t think it’s going to spoil your enjoyment), the Zorroesque “Masked Bandit”. Calleia was a great character actor in a number of Westerns from the 1930s to the 1960s, usually when a Mexican American was required. Perhaps his best role was Monte Marquez (a saloon owner again) in the absolutely excellent Joel McCrea picture Four Faces West. But in My Little Chickadee he gives class to the support acting. The film kind of needed boosting. 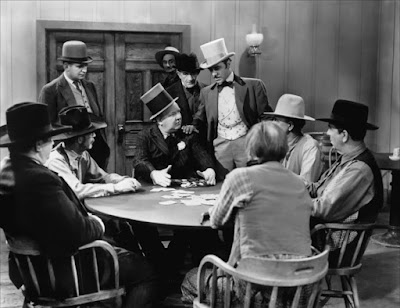 Calleia with his hand on Fields's shoulder


The New York Times review of the day when describing West and Fields quoted Noel Coward’s line about two empty paper bags belaboring each other and said that the film is at low tide most of the time in the quality of its humor. That’s putting it too strongly. There are some undoubtedly funny parts.


It is said that West and Fields didn’t like each other. It’s possible. There isn’t much magic or spark in the movie anyhow.


It’s worth a watch on a wet afternoon and will make you chuckle here and there.


I'd like to see Paris before I die... Philadelphia will do.