Drums Across the River (Universal, 1954)

These drums were to be heard not, like John Ford's, along the Mohawk but across the river. Westerns liked drums: Drum Beat, Distant Drums, Apache Drums, A Thunder of Drums, to name but a few. Anyway, this one is about Ute drums as the whites plan incursions into the gold fields of the San Juan Mountains. Actually, though, only one rather tambourine-like drum is heard in the movie, so Universal, though not skimping on budget (they threw a fair bit at these Audie Murphy Westerns) saved a bit on drummers.


Presumably, given the plot, we are before the Civil War, though as usual the costumes, guns and so on all are aimed at 1880 or so. That’s normal. 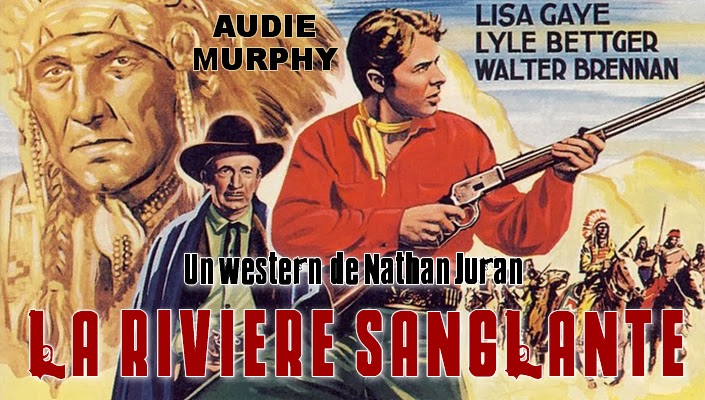 One of the better Audie oaters
The story starts in Crown City, Colorado when young freighter Audie, whose ma has been killed by the Utes, is planning an expedition with ultra-slimy Lyle Bettger – a villain from his first camera shot – and his henchmen to cross the river in defiance of a treaty and prospect for gold in Ute lands. Audie’s dad is statesmanlike Walter Brennan, who has forgiven the Utes for killing his wife and tries to dissuade his son from crossing that river. But oh, the intemperance of youth; Audie will not heed these paternal words of wisdom (though we sense he will by the end of the movie) and all hell is let loose - luckily for an action Western.


Almost immediately the party is attacked by Utes under Jay Silverheels, son of Chief Ouray. Naturally, evil Lyle has deliberately provoked the fight. He is working for the sinister Indian Ring, “our friends in Denver” as he calls them, who want an Indian war so that they can snatch the Utes' land and win juicy contracts from the Army. There is, in fact, more than a whiff of historical truth to these despicable rings; unscrupulous but shadowy businessmen did their utmost to incite war for the profits that were involved. 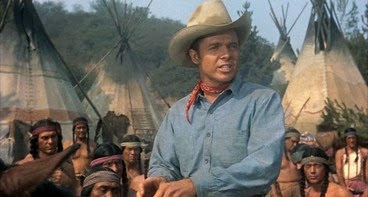 Brave hero goes into Indian camp alone to make peace, Broken Arrow-style
Well, brave Audie sets off alone through hostile territory to meet the dying Ouray (Morris Ankrum doing his thing) and we have a sort of sub-Broken Arrow plot as statesmanlike Indian chief and white man agree peace, despite the hotheads and firebrands on both sides. Audie is the Jeffords figure.


I actually like this movie. Audie was in a fair few formulaic B-Westerns but this one’s a bit different and, like Broken Arrow, actually had something to say. It was written by John K Butler who had done a good number of B-Westerns and TV shows (especially The Gene Autry Show) and was to write 67 Westerns in all. It was directed by Nathan Duran, an Austrian who had specialized in fantasy-adventures such as The 7th Voyage of Sinbad and the epic Attack of the 50 Foot Woman. He had directed the Ronald Reagan Law and Order and two Audie Westerns, Tumbleweed and Gunsmoke, all in 1953 (a great year for Westerns). Both writer and director did a professional job. 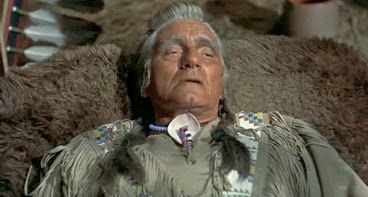 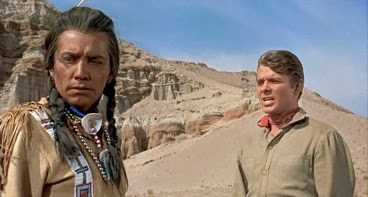 There’s some solid support acting, notably from Hugh O’Brian as a most villainous gunslinger, Bob Steele, ditto, and Emile Meyer as a basically decent but misguided townsman. Silverheels was never less than good and this was one of Brennan’s better efforts. Bettger is splendidly smarmy. He was never the scarred, eye-patched, unshaven style of outlaw, but always the groomed, dandyish Iago in a silk vest who smiled and smiled and was a villain. Yup, a good cast. 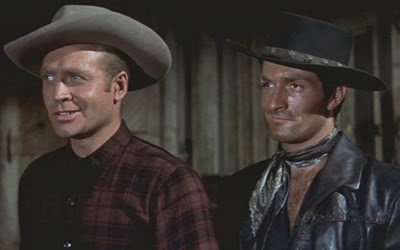 Excellent villains: Lyle Bettger as Indian Ring fixer and Hugh O'Brian as hired gunfighter
And, as was the case with many of these Universal Westerns, there is some first class location photography, the San Bernadino Mountains standing in impressively for Colorado and beautifully shot in Technicolor by Harold Lipstein, who did sixteen Westerns, not always top-drawer ones but always attractive visually (e.g. Across the Wide Missouri, Chief Crazy Horse, Wichita, Pillars of the Sky, and several Audie oaters).


It’s quite a watery Western, with some good wet scenes, such as Audie walking to the scaffold under a beating rain, a fistfight in a drinking trough and multiple crossings of the river. You might almost accuse it of being art. 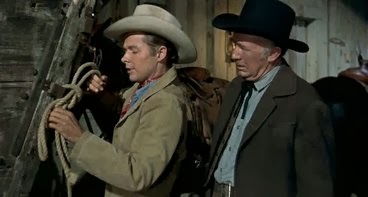