Death Without Company by Craig Johnson

Death Without Company (Viking Penguin, 2006), which was named the Wyoming Historical Association's Book of the Year, is the second volume in the Longmire series and the story starts in the winter after the demise of Vonnie (see The Cold Dish). This one deals with Basques in Wyoming as well as Cheyenne and Crow.


Most of the team at the Absaroka County Sheriff’s Department of Vol. 1 return: Walter Longmire, of course, who tells the story in the first person; Ruby, the dispatcher; Vic Moretti, the foul-mouthed deputy from Philadelphia; part-time deputy Ferg, when he isn’t fishing; and former Sheriff Lucian Connally, old-folks home resident and part-time dispatcher when Ruby is off. Lucian’s nephew has, however, disappeared as deputy (no great loss), hived off at the end of The Cold Dish to the Highway Patrol, and is replaced by Basque-Mexican Santiago Saizarbitoria, called Sancho by Vic, a new recruit. The team gains another recruit in the last chapter. 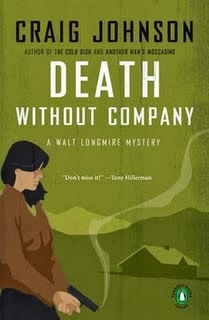 Vol. 2
And naturally Henry Standing Bear is back, presiding over the Steinbeckian bar The Red Pony (“continual soirée”, whatever that may mean) and he once again plays a key part in the action, saving Walt’s bacon, in fact, much as Walt saved his in the previous tome. Well, they save each other’s bacon on a pretty well 24/7 basis. Walt’s daughter Cady returns from her lawyering for Christmas, though Walt doesn’t have much time for her, as a pretty high homicide rate strikes the county (again) right during her visit.


Yup, it’s a murder story, natch, with Lucian’s old people’s home co-resident, the Basque Mari Baroja, dying and Lucian insisting she was poisoned. The plot thickens faster than quick-drying concrete boots pretty well immediately thereafter as murders and attempted murders follow in quick succession. Mari turns out to have been a very rich woman, and various unsavory relatives seem to be suspects.


It’s interesting that the Wyoming Historical Association liked the book but you can see why. Longmire is more than half cowboy, with his Stetson and .45 and love of the past. And like all good Western heroes, he is modest, brave, taciturn and resourceful. This really is a contemporary Western, even if he does use his four-wheel-drive Bullet rather than a four-leg-drive horse. 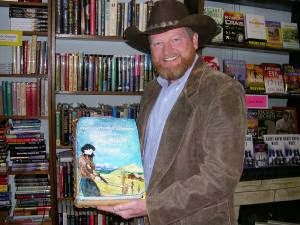 Craig with Death cake, probably baked at the Basque bakery next to the Durant chainsaw service place
There are nasty badmen, a sinister éminence grise behind the plot, a fair amount of firearms going off and mucho skullduggery, all the right ingredients, in fact, for a modern crime thriller, but in a semi-Western setting. The stake-out/set-up in the hospital is particularly well done.


And it’s cold. Winter in Wyoming, boy, they do winters there and no mistake.


Well, on to 2007’s Kindness Goes Unpunished. I hope Walt and the Bear aren’t going to get shot up at this rate for all fourteen stories. There won’t be much left of them.