Once the Mexican-American War was over and the Treaty of Guadalupe-Hidalgo signed in 1848, one might have imagined that peace and prosperity would have come to the border region, both sides of the Rio Grande. But the free trade carried out on the US side and the high tariffs on the Mexican side led to an unequal development, to say the least. So much so that in 1858, the Governor of Tamaulipas, Ramón Guerra, established the Zona Libre in the state of Tamaulipas right on the Rio Grande in an attempt to foster the economic prowess of his state. Goods could be stored, bought and sold duty free.


This was taken as the basis for the 1954 Universal film Border River which has Confederate officer Joel McCrea in 1864 smuggling gold bullion into the zone from Colorado in order to buy arms for the Confederacy in the Zona Libre. So it’s a Civil War/Mexican/skullduggery Western. Lucky it had Joel McCrea in it because otherwise it hasn’t got a huge amount going for it. 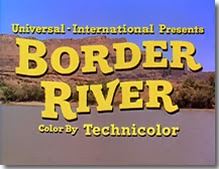 Mexican pot-boiler
Opposite McCrea was Yvonne de Carlo. Now I’m sorry, and I don’t want to be unkind, but I always thought Ms. De Carlo was less than good in Westerns. She started with Salome, Where She Danced in 1945 with the plodding fellow Canadian Rod Cameron and followed it up the same year with the dire Frontier Gal, also with Cameron. Black Bart, Calamity Jane and Sam Bass, they were all pretty grim. About the best was Tomahawk with Van Heflin in 1951. In 1952 she was with Joel McCrea in The San Francisco Story and in ’54 they got together again for the pot-boiler Border River. After that she descended into very B-Westerns and TV shows.

Yes, well...
McCrea on the other hand is splendid. Always convincing as a decent, quiet Westerner who underneath is tough as nails, McCrea was in a whole series of Westerns which were either superb or, if they weren’t, were much better for his being in them. His first real role in a Western was third-billed in Barbary Coast in 1935, an entertaining San Francisco melodrama, then he had major lead roles in big manifest destiny Westerns, Wells Fargo in 1937 and Union Pacific in 1939. He was Buffalo Bill in 1944 and The Virginian in ’46, then starred in the seriously classy Ramrod in ’47. Later big roles were in the Raoul Walsh-directed Colorado Territory in 1949, as Wyatt Earp in Wichita (1955) and Bat Masterson in The Gunfight at Dodge City (1959). Probably his greatest achievement was one of his last, the magnificent Ride the High Country (1962) for Sam Peckinpah, in which he was electrifying. My own personal Joel McCrea favorite was Four Faces West, a delightful little 1948 Western of great charm. 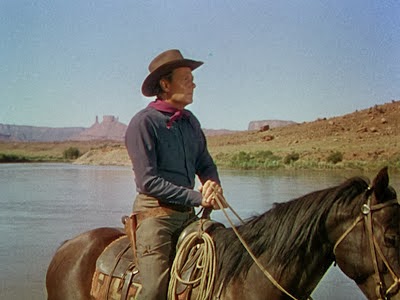 McCrea: splendid
The Zona Libre (which various actors pronounce zona libra or zoner libruh) is ruled by an obligatory corrupt, decadent Mexican officer, General Calleja (Pedro Armendariz Jr.), though you would think the Mexicans would have got rather tired of these negative stereotypes. His sidekick is the also pretty well compulsory German adviser (all corrupt Mexican generals were expected to have them; see The Wild Bunch, Bandido, ¡Three Amigos!, etc.), Baron von Someone (Ivan Triesault), who is just as corrupt as his boss but a bit stiffer. Alfonso Bedoya does a good job as the cheerful if only marginally competent Captain Vargas. Howard Petrie is there as a gringo spy but really the cast is less than stellar, apart from McCrea. 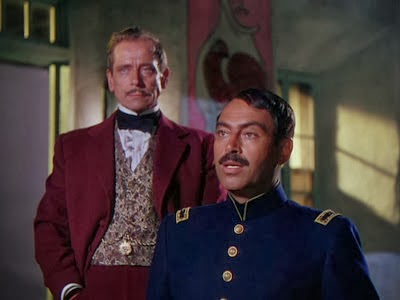 German baron and corrupt Mexican general
It was nicely shot on the Colorado River, Moab, UT by Irving Glassberg (The Lawless Breed, some Audie Murphy Westerns and a couple of those Yvonne de Carlo ones, as well as his master work, Bend of the River).

Bedoya fun, De Carlo could have been worse and often was, McCrea fine, Armendariz ho-hum
It was directed, competently, by good old George Sherman (he'd helmed Joel's previous Western, The Lone Hand, too) who made the most of the corny William Sackheim/Louis Stevens screenplay. The opening scene as McCrea rides across the Rio Grande is very well done. Sherman was a workmanlike director of Westerns. He made 159 from a Hoot Gibson programmer in 1935 to nominal direction of Big Jake in 1971 (though by then he had slightly lost it and John Wayne had to do most of the work). He did that Heflin/De Carlo Tomahawk (a Jim Bridger story), War Arrow, Chief Crazy Horse, Hell Bent for Leather – so some solid work there, and many had a worthy anti-racist agenda.


All in all, a rather typical Universal B-Western of the period, much improved by McCrea and worth seeing for him but not really getting beyond a two-revolver rating.