What a remarkable year for Westerns 1948 was. John Wayne was in three great classics, John Ford’s Fort Apache and 3 Godfathers, and Howard Hawks’s Red River. Bogart was in The Treasure of the Sierra Madre and Gregory Peck was in Yellow Sky. Alan Ladd in Whispering Smith, Joel McCrea in Four Faces West, Randolph Scott in Albuquerque, Glenn Ford and William Holden in The Man from Colorado, Holden again and Robert Mitchum in Rachel and the Stranger, and Mitchum again in Blood on the Moon. These were all either good or great Westerns. Blood on the Moon was one of the best.


There are several reasons for this. One was Robert Mitchum. Mitch, we all know, could sleepwalk through roles and was in a lot of weak Westerns; it was a job. But every now and then he fired on all cylinders. And when he fired, boy, was he good. In this one he is electrifying as the gun-for-hire who, as his partner says “always had a conscience breathin’ down your neck.” Mitchum served his time in twelve B-Westerns in 1943 - 45 before securing the lead in a fine film, the Raoul Walsh-directed noir Pursued in 1947. Blood on the Moon was the second Western noir (they were rather à la mode) and equally fine. 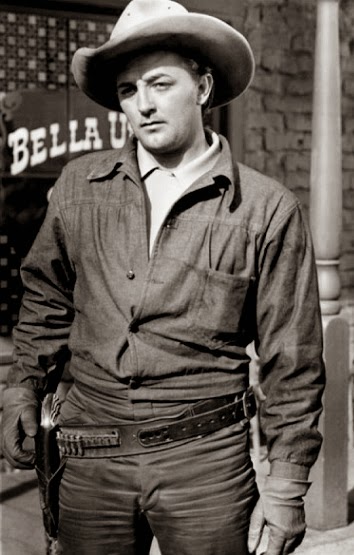 Mitchum when he bothered, superb
The second reason was the writing. Luke Short’s 1941 novel Gunman’s Chance was a tight, gripping action Western in the very best tradition. All his work was, in fact. Film makers found Short’s books ideal for post-war Westerns. Ramrod was an outstanding movie with Joel McCrea in 1947; Coroner Creek with Randolph Scott, Blood on the Moon with Mitchum and Station West with Dick Powell, all in 1948; Ambush in 1950; and the excellent Vengeance Valley in 1951. The books were the right length, had pace, plot and strong characters – and they had a hint of noir. Gunman’s Chance was adapted into Blood on the Moon (the novel was later reissued under this new title) by veterans Lillie Hayward (mainly children’s Westerns like Cattle Drive, Proud Rebel, Smoky) and ultra-experienced Harold Shumate (from Fighting Back in 1917 to a Bonanza episode in 1959 and 58 titles in between). 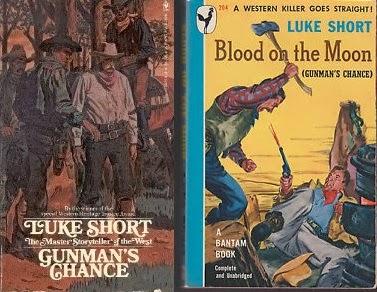 Luke Short, one of the greatest Western writers
Robert Wise had been at RKO since the year dot (an early assignment was to synch the beeps on the RKO tower logo) and had been Orson Welles’s editor on Citizen Kane. He thought Short’s book would make an ideal Western and persuaded the studio to make it. Wise scorned horse operas – he only made three and the other two were weak Bs – but he loved noir, clearly had great talent and he brought it all to bear directing Blood on the Moon. It’s true that he directed The [appalling] Sound of Music later but we can’t really hold that against him. Oh, alright then, we can. 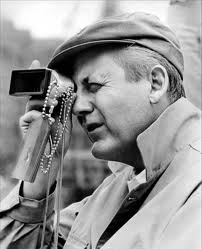 Robert Wise: we forgive him for The Sound of Music
Then there’s the look of the thing. As befits a noir, Blood is in black & white, many scenes are set in rain, at night or in shadowy interiors, and the high country snow settings are magnificent. It was shot in California and Sedona, AZ locations by Nicholas Musuraca, RKO stalwart largely responsible for their rep for moody, shadowy darkness. Wise went for authentic costumes (a bearskin coat, plaid pants, derby hats) by poring over old photographs. Mitchum had stubble and greasy hair. Sets had low ceilings to give a claustrophobic atmosphere. So that’s four reasons so far why the film was so good.


The support acting is another. Robert Preston is there in ‘his’ part of smiling, corrupt friend. The same year he did exactly the same for Alan Ladd over at Paramount on the set of Whispering Smith. On Blood, Preston and Mitchum hit it off and were delighted when Wise insisted on no stunt doubles for the climactic fight scene. For three days of shooting the two grunted and sweated as they slugged it out on the saloon (watched by uncredited but unmistakable barman Chris-Pin Martin). They got the authentic look of clumsy bar room brawling, as opposed to the acrobatic, staged stuntmen fights we are used to. Of course Preston and Mitchum both knew a thing or two about bar room brawls. 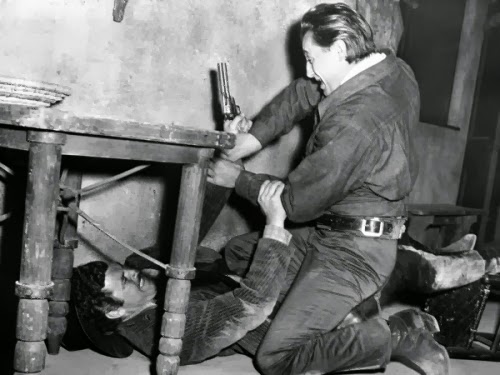 Sweating and grunting
Preston and Mitchum also spent time making life miserable for the women actors. There are two sisters in Short’s story, Amy and Carol Lufton. Amy is the feisty one who falls for Jim Garry (Mitchum) and Carol is seduced by Tate Riling (Preston) into betraying the secrets of her rancher father. Actually, both are a bit of a pain. Well pre-Dallas Barbara Bel Geddes took the Amy part and Phyllis Thaxter was Carol. They were both rather ‘straight’ and found it hard to deal with the testosterone-ridden set.


Walter Brennan had two great Western parts in 1948, as Wayne’s sidekick in Red River and as the homesteader Barden in Blood. He’s very good in this. He brings dignity and restraint to the role (which he didn’t always). Then there’s good old Frank Faylen as the corrupt Indian agent Pindalest. I always liked Frank. Look at him, for example, in California, The Nevadan, The Lusty Men or 7th Cavalry. Or as the tinhorn gambler with a derringer in The Lone Gun. He was in Whispering Smith too. Pindalest gets a much rawer deal in the book (he is a fat drunk who can’t cope with the high country in winter). But then he deserves what he gets. Faylen as crooked Indian agent
With Brennan and Faylen we have Tom Tully as the rancher John Lufton (it’s a rancher vs. homesteader plot) and if you don’t blink you’ll catch cowpoke Harry Carey Jr. (he has one line) and tracker Iron Eyes Cody. I remember Mr. Tully from any number of Western TV shows but he also had small parts in a number of Westerns, some of them quite good, such as The (1946) Virginian, Rachel and the Stranger (also with Mitchum), Branded and Tomahawk. 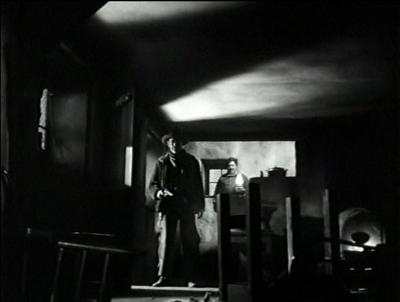 Brennan noir
Wise was after atmosphere. And he got it. Musuraca’s noir cinematography, Mitchum’s moodiness, the dark music of Roy Webb (Track of the Cat, Tall in the Saddle, The Lusty Men, two of the three Mitchum pictures) all contributed to create it. Just imagine the same story filmed in color by George Sherman or someone and starring Randolph Scott, say. It would have been a perfectly acceptable Western, no doubt, but it wouldn’t have been this moody masterpiece. Blood on the Moon was a seriously classy Western, one of the best of 1948 and one of the cinematic highlights of the post-War period. It will be essential viewing for any serious Western buff, and normal human beings would enjoy it too. 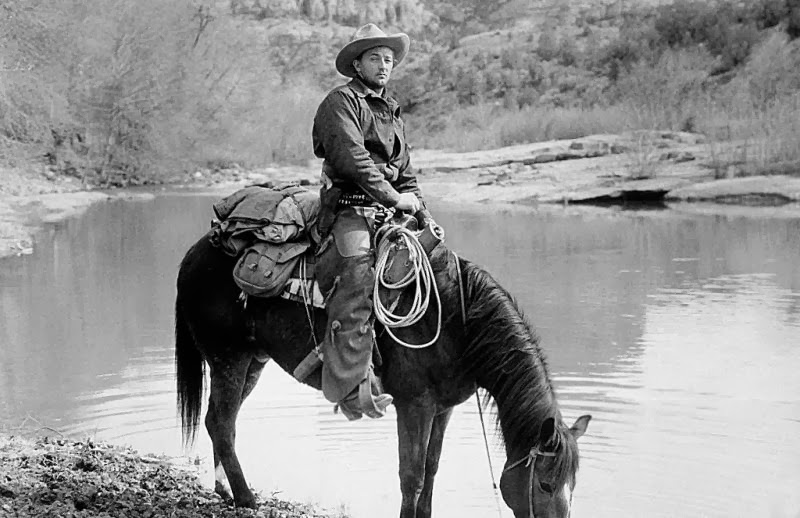