Like many Universal B-Westerns of the 1950s, Apache Drums was no ultra-low budget programmer. These movies had certain impressive production values, often good location photography, for example, or a competent cast. It must be admitted, however that Apache Drums is at the lower end of the Universal scale. There is little location shooting, though the Arizona village is attractive, and much is set inside a church (i.e. on a studio sound set) during a siege. Furthermore, the acting is at best middle-of-the-road and in certain cases very amateurish. 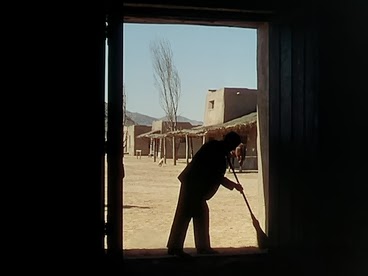 Sub-Fordian opening shot
It was directed by Italian-Argentinian Hugo Fregonese, B-movie expert, who as far as Westerns are concerned directed and/or wrote The Raid with Van Heflin, Saddle Tramp with Joel McCrea (these two were his best), did four South American Westerns, Shatterhand, and a spaghetti (Find a Place to Die). John Ford he wasn’t. Still, he does a reasonably decent job. 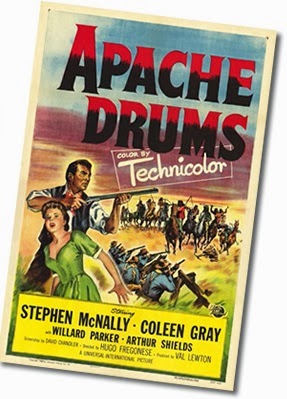 It was scripted by David Chandler (two B-Westerns and a couple of TV shows) from the Harry Brown story Stand at Spanish Boot and to be fair, the writers do try to keep the pace up and not let it drag. There is some love interest rivalry as the two main characters vie for the attentions of Coleen Gray but not enough to hold things up. The main weakness, though, is that all the characters are unsympathetic or morons, and sometimes both on the same day.


This isn’t helped by the bad acting. The star is Stephen McNally. McNally specialized in B tough guys and heavies and Westernwise was most notable as the villain Dutch Henry Brown in Winchester ’73. He was in a couple of Audie Murphy oaters (The Duel at Silver Creek, Hell Bent for Leather) and he did lead in a couple of Universal Westerns early on, The Stand at Apache River, for example, but he mostly did TV Westerns. He wasn’t very convincing as a lead. 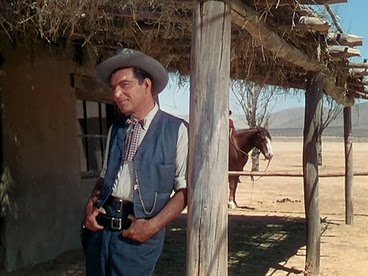 McNally: doesn't convince as Western lead
His opponent is the blacksmith-mayor of the town, Joe Madden, a little-Hitler type played by Willard Parker, 50s blond hunk who did a few Westerns and reached the dizzy heights of being Cole Younger in Young Jesse James and the sheriff in Calamity Jane and Sam Bass. There must have been lots of these small-town fascists in the West, I suppose.


The worst actor is Arthur Shields who plays the local clergyman (equally fascistic and unpleasant). His Irish accent is so awful that you wonder if it’s Scots until he talks in the script about when he was a boy “in Wales”. Wales? It’s supposed to be Welsh? 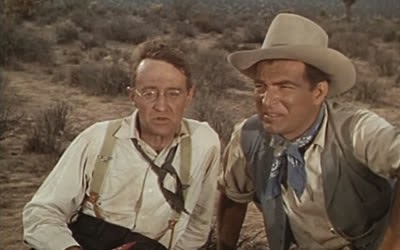 When I was a boy in Wales...
James Best has a micro-part but is sadly almost immediately written out.


At least there are some Apache drums, unlike most Westerns with the word drums in the title (Drum Beat, Distant Drums, Drums Across the River, Drums Along the Mohawk, A Thunder of Drums, War Drums). The ones under the opening titles sound a bit bossa nova but never mind. 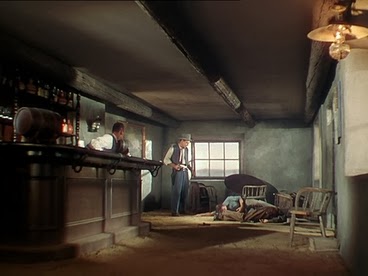 Some nice interior photography by Charles P Boyle
It’s a Victorio story of 1880 with Mescalero Apaches on the rampage. Victorio is shot by McNally and dies, as he did when shot by John Wayne in Hondo and when shot by the colonel in Fort Bowie. In fact, of course, Victorio was killed by Mexican troops under Colonel Joaquin Terrazas in the Tres Castillos Mountains, but we certainly wouldn’t want a mere thing like history to get in the way of our Western enjoyment.


There is a very vague attempt to show the Apaches’ side of the question but not much. Generally, it’s perfectly OK to shoot them down as savages and the US Cavalry duly arrives at the last moment and does so. Standard issue early 50s Western with not much going for it. 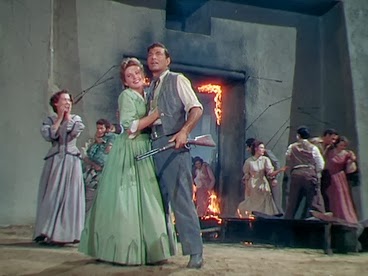