It has quite a few strong points

A 78-minute B-movie with 'A' pretensions, this Technicolor Western, no relation to the Robert Mitchum/Fred Zinnemann adventure of the same title of 1960, has its good points. A quite classy script, for one thing, which mostly avoids clichés and has something to say. It is by the producer Alan LeMay, later of The Searchers and The Unforgiven fame. For another, Robert Preston is the Wichita Kid. He was always full of beans and he is terrific fun in this. Then the Winton Hoch photography of the (proudly announced) Texas locations is attractive too. The Rudolph Schrager/Leonid Raab music isn’t half bad either. And there’s Chill Wills. 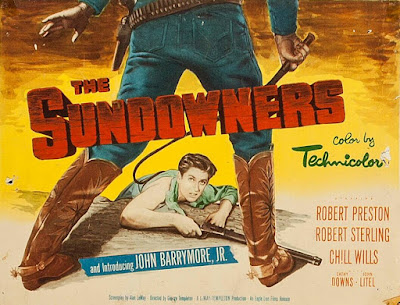 So all in all, a solid little Western. There’s a (very) sub-Shane plot of the gunslinger who rides in but Wichita is no Shane. And he meets a different ending…


There’s some good supporting acting. Chill is great, as (nearly) always, but there’s an excellent confrontation between John Litel as rancher John Gall, the father of the corrupt sheriff, and hero Tom Cloud (Robert Sterling, minor character actor elevated to lead in this). It was John Barrymore Jr.’s first film (as Tom’s younger brother). And guess what, it’s one of Jack Elam’s first Westerns! He looks young. I’m afraid I couldn’t say young and handsome. Less ugly, maybe. But he’s there alright. One-reel Jack in the flesh. One of the greats. 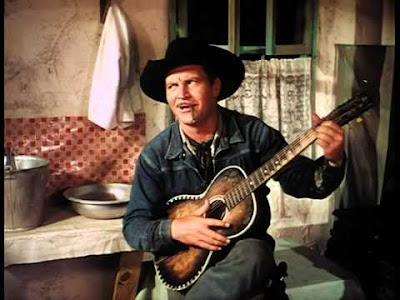 Preston doing his charming-rogue act (he pretty well copyrighted it)
There’s a minor-league shoot-out in the rocks reminiscent of the same year’s Winchester ’73 including a rather violent fight in which Wichita is assailed by Lash LaRue-esque heavy Dave Kashner with a whip (naturally the heavy plummets to his death).


Of course it turns out that Tom and Wichita are brothers. It had to. More shades of Winchester ’73. Do you think they had seen the script? 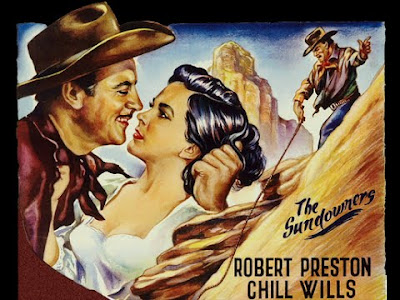 Like it
There’s a bit of cursory love interest (Cathy Downs as Elam’s wife) but she doesn’t get in the way really.


Nearly a hundred serious Westerns were released in 1950. This one isn’t a patch on Winchester ’73, Rio Grande or Broken Arrow but it’s a nice little mover which was a lot better than many oaters of that year.


In the UK it was called Thunder in the Dust, which seems more dashing somehow.