Even the title these days leaves a slightly sour taste in the mouth but in fact this film is interesting as being not anti-Indian, really. It is guilty of being patronizing to Native Americans but it isn’t offensive. The hero marries a Ute woman and although at first the justice of the peace refuses to carry out such a ceremony, the hero’s friends oblige him to. The couple have a young son who is clearly loved by all – by both parents, the ranch hands and the townsfolk. Many early Hollywood movies were much less anti-Indian than one might imagine. The Indian maid in the story was also played by an Indian, which was good – and unusual. 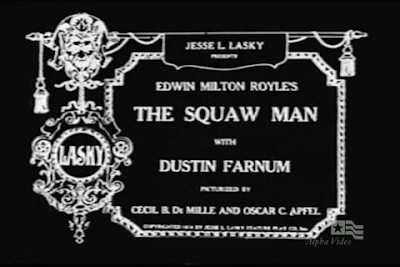 The Squaw Man is notable in many ways. It was the first film directed (or ‘picturized’, as the credits have it) by Cecil B DeMille, for one thing. Actually, DeMille co-directed the 1914 one; stage actor Oscar Apfel is also credited. DeMille made quite a thing of this story, remaking it, though a reel shorter, in 1918 with Elliott Dexter as Jim Carston and Jack Holt as Cash Hawkins, and again as a talkie in 1931 with a rather unEnglish and hoodlum-looking Warner Baxter (the first celluloid Cisco Kid) as Carston and an excellent Charles Bickford as a snarling Cash. 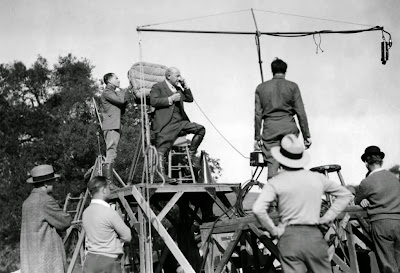 The film is also credited as the first Hollywood movie, establishing the industry in California, though much was shot on location round Flagstaff, AZ. It was a big hit at the box office and helped producer Jesse L Lasky and DeMille go in with Adolph Zukor and the Frohmans in the early days of the great Paramount studios.


So it has considerable historical significance. Which is lucky, really, because in all honesty purely as a film it is a bit weak, and at 80 minutes too long. And as a Western it only barely qualifies. More than a quarter of the screen time is taken up with story set in England as aristos dine in country houses and one of them, the rotter, the Earl of Kerhill (Monroe Salisbury) embezzles the funds of his regiment’s Orphan Fund because he has “plunged” too heavily on the Derby (the Epsom one, not Kentucky). The hero doesn’t even arrive in the USA till 21 minutes in and later the film goes back to Europe for the death scene of the cad, in a fall while mountaineering in the Alps. Hardly Western material.

Still, the Western scenes when they do appear are quite fun. They seem to be set in Wyoming and feature Utes. I didn’t know the Utes got that far north but perhaps they did.

The story had appeared in 1905 as a Broadway play by Edwin M Royle (1862 – 1942); he was a popular and successful American playwright, whose most famous work The Squaw Man was. Apfel and DeMille adapted it for the movie. 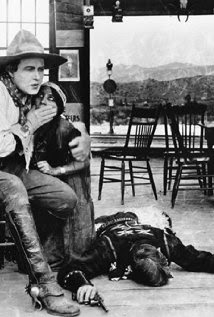 The death of badman Cash

The hero is decent Brit Jim Carston, played by Dustin Farnum in only his second movie though quite portly even then. He was to make the first version of The Virginian for DeMille later the same year. Jim is cousin of the embezzling bounder and he nobly assumes the blame for the Orphans Fund scandal and goes to America to escape the shame (as one does). He secretly loves his cousin’s wife Lady Diana (Winifrid Kingston) but of course cannot show his affection. Maybe that’s also partly why he left for Wyoming. Jim buys a ranch and starts a feud with brutal Cash Hawkins (William Elmer, in those silly fuzzy chaps and a highly decorated vest which I covet), who mistreats an Indian girl, Nat-u-ritch (Red Wing). Jim saves Nat-u-ritch from Cash’s importunate aggression and she falls in love with Jim. Later, she saves Jim in her turn – twice, in fact, because she fires on Cash from hiding when he tries to shoot Jim in the back in the saloon, and later she rescues Jim when he is unhorsed in a blizzard, snowblind and near to death. Jim marries her. Jim and Nat-u-ritch have a son, probably called Not-yet-ritch. 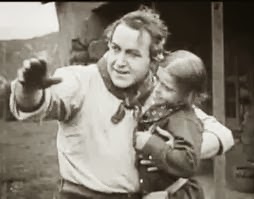 Dustin with future Earl of Kerhill

The acting is very ham for our day and, because of the English scenes especially, resembles an Edwardian melodrama of the corniest kind.

However, the photography (Alfred Gandolfi) is rather advanced for the time. There are a couple of close-ups and even some 1914 trick photography, for example as Jim reads a magazine and the illustration of a woman in it morphs into the lovely Lady Diana.

Have a look, dear Western fans, by all means. But view it as an historical document; don’t expect a William S Hart-style silent Western. Rather, I would place it as a companion piece to the 1914 version of The Spoilers.

Reader Bob Madison sent me a very interesting article about the making of The Squaw Man and if you want to know more on that subject I recommend clicking here. I hadn't realized how little experience DeMille had in film making (one day observing shooting at Edison's in the Bronx), which is why Apfel was drafted in, and also amusing is the story of attempted theft of the finished footage and someone taking a shot at DeMille. Thanks, Bob!