When I first saw this movie I wrote in my notes, “A rather boring black & white play. Newman hams it up as Mex bandit. Laurence Harvey spends most of play tied to a tree and gagged. So that’s good. Bloom fake Southern accent. EGR has best part.”


On balance, I still think that’s basically true and could probably stop my review here but I have revised my opinion slightly upwards on further viewings and I don’t think now that it’s quite as bad as that.


It certainly is very static and like a stage play – death for a Western. But the on-location flashbacks are very welcome and the James Wong Howe photography of the Arizona scenery is wonderful, luminous. The whole tone of the story is dark and one of foreboding, from the introductory slow zoom on the night-time railroad depot in the pouring rain onwards. We focus in on Preacher Shatner, sitting, disconsolate. Bearded farmer Howard da Silva is there too and they recount the horrors of the previous day’s murder trial to cynical, worldly Edward G Robinson, bunco artist. 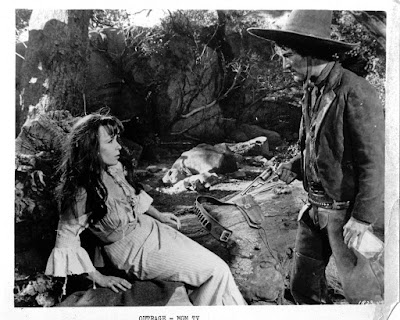 
Based on the Japanese stories Rashomon and In A Grove by Ryunosuke Akutagawa (made into the film Rashomon by Kurosawa), this is another 60s borrowing of a Japanese tale transposed into the key of Western. It is a clever recounting of the same story by different people, even the victim (he whispers his version to an Indian who tells it at the trial; not very plausible, I agree) in which we, the audience, are convinced by each one and forced to change our opinion each time. Even the final ‘true’ version turns out to be flawed and Edward G has a great metaphor about the truth being like the shell game: now you see it and now you don’t.


Edward G is great, Shatner surprisingly convincing, da Silva sympathetic. Newman in black hair and droopy mustache is not as hammy as my first notes suggest and essays a Mexican accent with some aplomb. The two weakest links are really Lithuanian/Brit movie star Laurence Harvey and Brit Claire Bloom, both of whose Southern American accents are less than convincing. Bloom overacts, especially in her trial testimony scene. Harvey (Travis in the John Wayne 1960 Alamo) does indeed spend a lot of the play tied to a tree and immobile and, worse still for an actor, gagged. Boy, do those eyes move. Bloom had in fact played the equivalent part in the New York stage production of Rashomon. 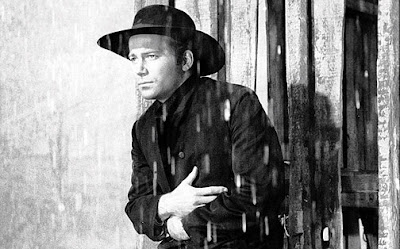 
In the last scene da Silva and Shatner go off with a babe in arms on a donkey like some seriously weird holy family.


I didn’t care for the Alex North music which is plain soppy when Bloom is on. The direction (Martin Ritt) and editing (Frank Santillo) are also a bit mediocre. Ritt produced as well as directed it. He had directed Newman in the excellent Hud the year before and was to do the same with the even better Hombre (four revolvers, going on five) three years later. The Outrage is not at all in that class but has its points.


The main trouble is that it is simply too slow. The pace might be fine for a three-act play on Broadway or for a Kurosawa film but it doesn’t work in a Western. Kurosawa gives us subtlety and a statement on the elusiveness and illusiveness of truth. This version just gives us four long tellings of the same story. Great acting might have saved it. As it is, two revolvers, dudes.

EGR the best part and best actor
Posted by Jeff Arnold's West at 9:22 AM