I wasn’t sure whether to include this film in this blog. Most guides to Westerns don’t. But in the end I did because it has a Western look and feel to it, it is set somewhere along the Ohio River, there are guns, and Robert Mitchum wears a frock coat and rides a white horse. Also, I just love the movie and wanted to write about it. 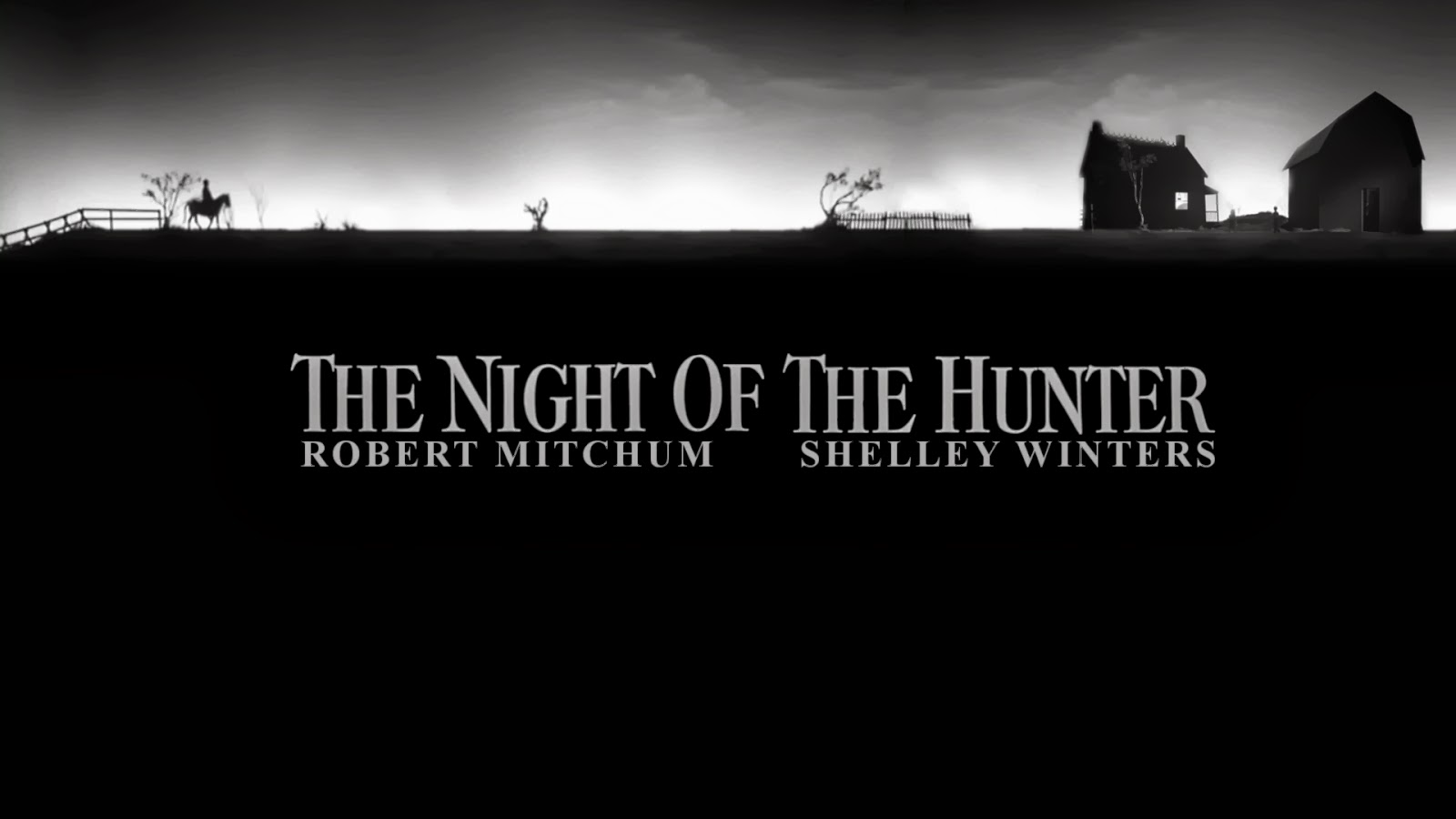 Charles Laughton, described by Laurence Olivier as the acting profession’s only genius, turned out to be a Welles-like innovator behind the camera. The American Gothic novel The Night of the Hunter by Davis Grubb thrilled him and the role of psychopathic evangelist in the Depression West was made for Mitchum. Mitch handled the outward charm and inner evil with perfect aplomb. There was talk of Gary Cooper and he would have had the right look and been fine as the smiling charmer but he would never have carried off the evil side. Warners and Columbia turned Laughton and producer Paul Gregory down but UA offered little more than half a million dollars to make it and Gregory, Laughton and Mitchum went ahead. They produced one of the greatest films in Hollywood history and certainly one of the stand-outs of the 1950s. 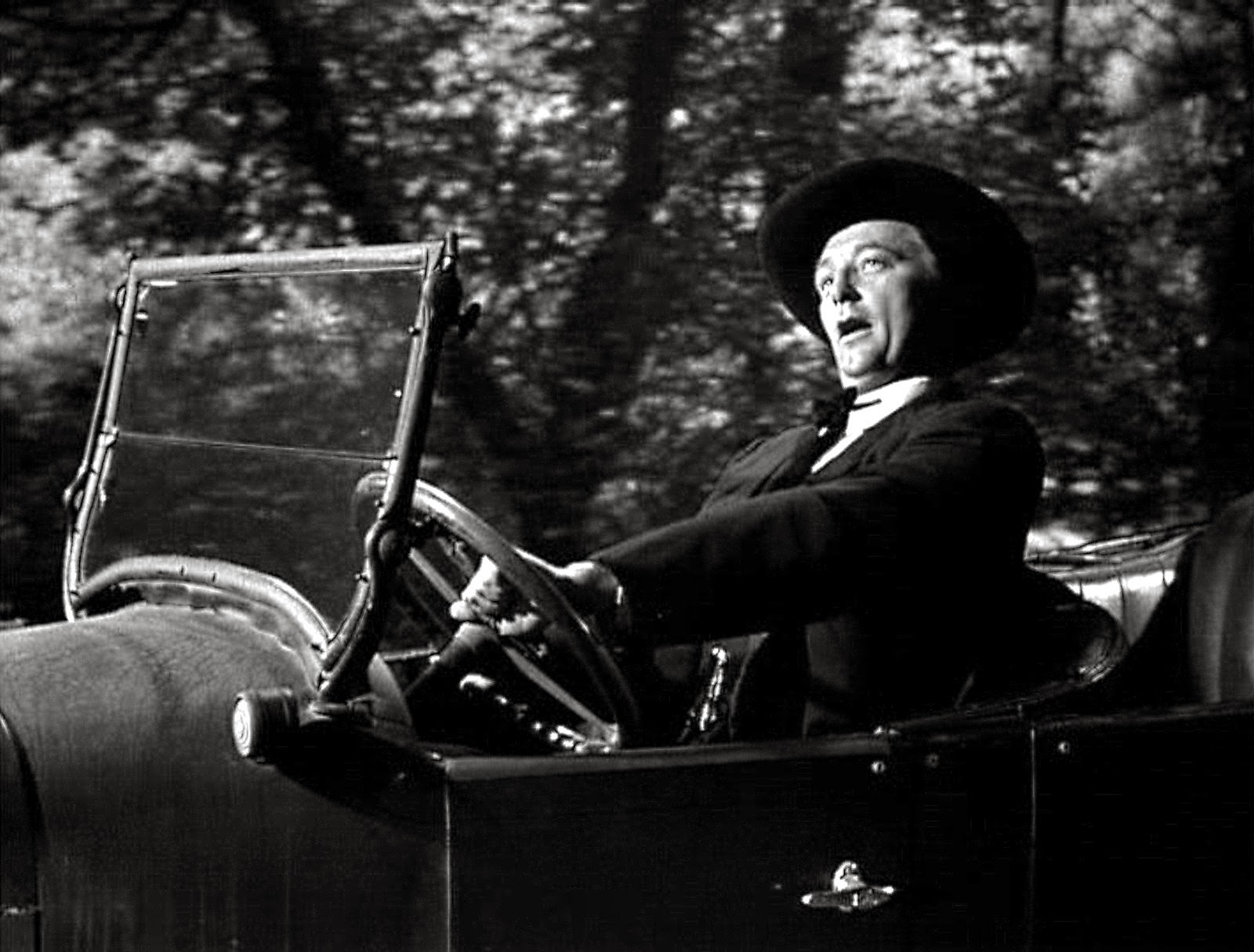 A kind of reprise of Mitchum's arrival in Rachel and the Stranger of 1948
The combination of Laughton, set designer Hilly Brown and DP Stanley Cortez made it visually stunning, with stark black & white and shadows and silhouettes emphasizing the sinister and oppressive. The Walter Schumann music is also glowering and fraught. Certain scenes stick in the memory, Winters’s hair streaming out in the river weed under the river, the mounted preacher on the skyline, the shot of the train, the ecclesiastical A-frame of the bedroom and so on. 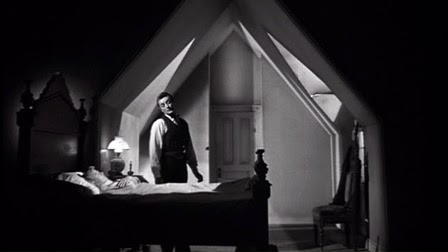 The bedroom is a church - or crypt
Mitchum had the huge good fortune to play against a dynamic young Peter Graves in the part of the executed father, a superb Shelley Winters as the wife (although neither Mitchum nor Laughton could stand her tantrums and scenes) and, especially, an outstanding Lillian Gish, 62, as the protective foster mother. Don Beddoe and particularly Evelyn Varden are also very fine as the Spoons, the gullible ice cream parlor owners who are taken in by the preacher and then want to lynch him when the truth they had been blind to comes out. 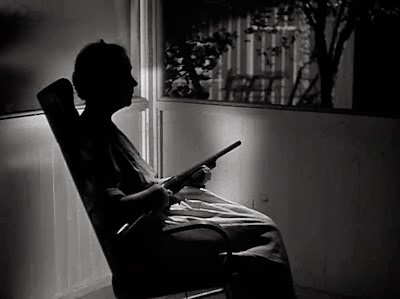 Gish: what a fine actress she was.
Roger Ebert described this shot as "Whistler's mother holding a shotgun".
Laughton never got on with children and Mitchum ended up doing most of the direction of Billy Chapin (12) and Sally Jane Bruce (7). They are superb. How children so young play so well is a mystery. The little boy is fantastically brave. 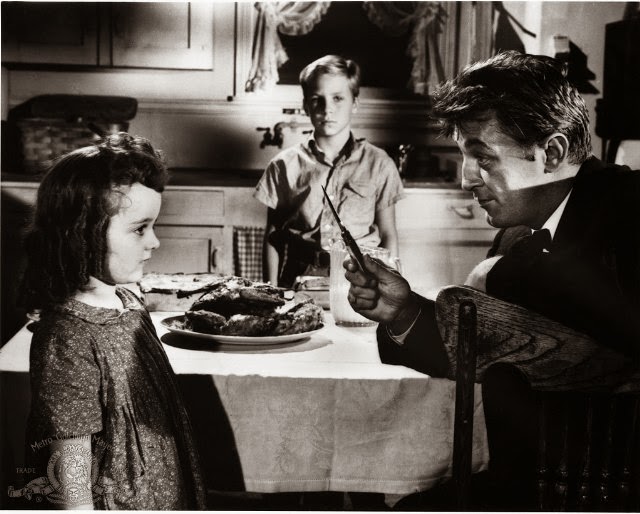 Outstanding child actors
The film sank commercially and critically and Laughton never directed again. Only later did it grow to become the great classic it now is.


There are odd false touches – at one point the film seems to have become a menagerie as every critter under the sun is photographed in foreground as the skiff floats by. But Laughton was going for the DW Griffith look (one of the reasons he wanted Gish) and I think the idea was magical-biblical. In any case, the scene is eerily memorable.


It is a film of amazing originality and possibly Mitchum’s greatest role. Is it a Western? Probably not. It's expressionist ultra-noir. But see it anyway (preferably in the 1995 35mm print), if you haven’t, and see it again if you have.

"On his right hand Billy'd tattooed the word love and on his left hand was the word fear
And in which hand he held his fate was never clear"
Bruce Springsteen, Cautious Man, on Tunnel of Love, 1987