Tom is rather stern

It was inevitable, once Zane Grey’s 1912 novel Riders of the Purple Sage had become so enormously popular, that a film version would follow swiftly on its hooves. And indeed, only six years later, Fox produced a silent movie of it, directed by Frank Lloyd and starring William Farnum as Lassiter. I haven’t seen it but it was evidently a big effort, with five reels.


By 1925 Hollywood Westerns had moved on, however, and it was time for a new one, this time featuring Fox’s great star Tom Mix.

Mix was at the height of his fame. Between wrapping the picture and its opening he had undertaken a European tour where he was received with wild enthusiasm. On his return in May, President Coolidge invited him to the White House. His salary was huge and his lifestyle lavish. But he was increasingly fretting under the controls on his pictures Fox imposed, he was drinking hard and, as usual, his matrimonial situation was in difficulties – he was on his fourth wife, Victoria Forde. Reviews of Purple Sage were mixed. Mordaunt Hall in the New York Times of the day wrote, “If one were able to have a haircut and a shine while viewing Tom Mix's latest picture, ‘The Riders of the Purple Sage’, it would prove a far more entertaining effort than it is when sitting still twiddling one's thumbs.” That was a bit harsh. I don’t know why he had that u in his first name. Mr. Hall did, however, in a rather superior fashion, reluctantly admit that “the boys in the Piccadilly yesterday afternoon were very keen about Mr. Mix's ability to outwit the cattle thieves, and their applause demonstrated that they approved of his excellent horsemanship and his manner of polishing off the bad men.”


Snooty critics or no, the movie was a smash hit at the box office. 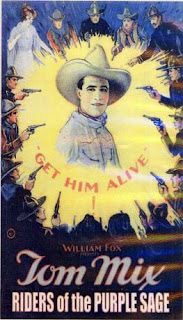 It is, however, rather lower-key than the usual glitzy Mix efforts. Perhaps because he was trying to make a ‘serious’ Western along the lines of the novel or perhaps because of his personal and professional problems, Riders has little humor and is low on zip. There’s one amusing semi-comic stunt where Tom (he is Lassiter, of course) is ambushed by Tull’s thugs and escapes by sitting on a ripped-out sagebrush and getting Tony to tow him along the trail at ground level. But most of it is played straight with Tom’s Lassiter in black looking stern all the time.


It’s odd, too, that Mix and EA Bingham, his scenarist, faced with such a long book with so many episodes, decided to devote so much time to showing the backstory, which doesn’t appear in the novel at all. The film starts with farmer Frank Erne (Arthur Morrison), his wife Milly (Beatrice Burnham) and baby Bessie, arguing over the drudgery which Milly is condemned to and which slimy attorney Lew Walters (pre-Charlie Chan Warner Oland) is trying to seduce her away from. Walters and his unsavory ‘hirelings’ are run out of town and kidnap Milly and Bessie, and shoot Frank, before setting off. Dying Frank calls ‘Jim Carson’, Milly’s brother, to his bedside and Jim (Tom) vows to find the females and get revenge on Walters.


It’s only then we get to Cottonwood and Jane Withersteen and Venters and so on.


Tull (Charles le Moyne) is “a ruthless cattleman whose word is law in the town” and he makes Walters, who has now changed his name to Dyer, a tame judge. Dyer is not a bishop. In fact Mormonism is not mentioned at all. That whole aspect of the novel was excised, entirely, whether for reasons of aimed-at blandness (a sort of 1920s PCism) or shortness of time, who knows. Maybe there were some Mormons involved in making the movie.


Tom is duded up a bit though not as flashily dressed as in some of his efforts. He shoots the hirelings when he finds them in a saloon, so is quite tough for Tom, and he disposes of Dyer in the courtroom showdown quite satisfactorily with his sixguns, though Dyer is discreetly hiding behind his judicial bench so we don’t actually see him hit, just the sinister tell-tale bullet holes in the wood. 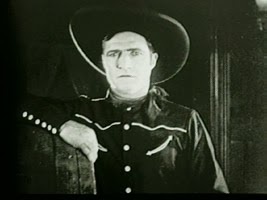 Some of Tom’s gravitas is lost because of his bandy-legged walk, made worse by the speeded-up film of the day.


The entrance to the rustler’s hideout, through a waterfall, is there (famously copied in Johnny Guitar) and the carved footholds and balancing rock of the hidden valley are well done too. There’s no climactic horse race, though, sadly, and, as was usual for movie Riders, Bern Venters (Harold Goodwin) is relegated to a minor part. Even Jane’s role is pretty low-key; she is not the ruling grande dame of Cottonwood but just a woman who duly falls for Lassiter.


It was shot at Lone Pine but manages to look very Utah-ish. The cinematography was by Daniel B Clark and is really rather classy. He photographed two other great Mix movies, TheGreat K & A Train Robbery (1926) and the 1932 Destry Rides Again. The music on the DVD is very repetitive. It probably would have been much better in a 1925 theater with a piano. At the New York première they had a full orchestra and Lassiter entered to Elgar’s Pomp and Circumstance!


Riders was directed by one of Tom’s favorites, Lynn Reynolds. Reynolds was an interesting fellow. A newspaper reporter in Iowa, Reynolds got into movies as an actor in 1914 and 1915, then writing and directing. Later he joined Universal and died of a gunshot wound, allegedly having shot himself in front of guests, following an argument with his wife, actress Kathleen O’Connor, during a welcome-home party being held in his honor following an on-location movie shoot.

Lynn Reynolds
There was a tall, young extra who was in Tull’s posse. He turned to someone on the set and offered the opinion that Mr. Mix didn’t act very well. “He’s good enough to make $17,000 a week,” was the short reply. That extra was Gary Cooper.