Heavyweight directors and big name stars don’t always make for the best Westerns. This one was directed by Fritz Lang and featured Marlene Dietrich  but while it has its points, it is a fairly turgid tale of romance and revenge.

Visually it reminds us of Johnny Guitar (Republic, 1954) and Nicholas Ray must have seen it. It also has that embryonic plot of a Belle Starr-esque bandit chief dame. The screenplay was by Daniel Taradash from a story by Silvia Richards. The writing is (presumably deliberately) melodramatic. It is a stylized Western with bright, primary colors and dramatic, even melodramatic painted studio sets. In that sense it is Johnny Guitarish. In addition, the overdrawn characters and hammed-up dialogues are notable. But Johnny Guitar, though weird, was an art movie, a camp classic. Rancho Notorious is hard-boiled but basically bland. 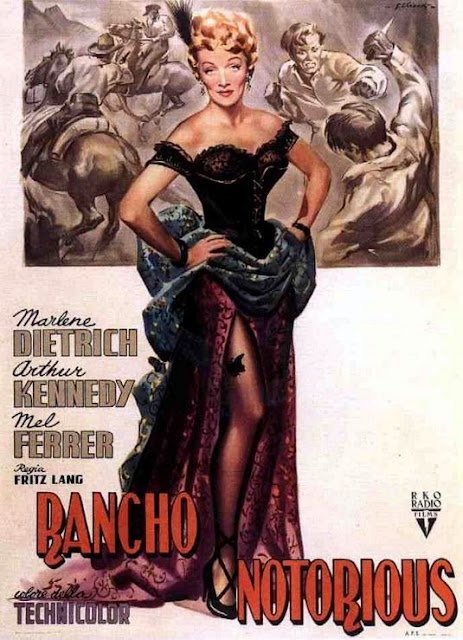 Little more than a B-Western, really


Fritz Lang, the famed director of German expressionist silents like Doctor Mabuse, Metropolis and M, left Nazi Germany for Paris, then the US and joined MGM where he directed Spencer Tracy in Fury (1936). He made an average of a feature a year for the next two decades, in all sorts of genres. Although attracted to the film noir, Lang also longed to do Westerns. He said, “I like Westerns. They have an ethic that is very simple and very necessary. It is an ethic which one doesn’t see now because critics are too sophisticated. They want to ignore that it is necessary to really love a woman and to fight for her.” In 1940 he directed the sequel to Jesse James for Fox, The Return of Frank James, with Henry Fonda magisterial. The following year came the lively, fun Western Union with Randolph Scott, also for Fox. Then there was a long gap before his last Western, Rancho Notorious in 1952. The first two were classy big-studio Westerns of their time. The last was basically a B-movie. 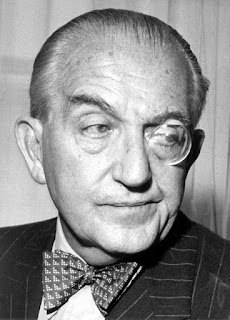 
RKO's Howard Hughes kept the budget minimal, forcing much use of sound sets. This does give it a slight uptight, claustrophobic feel. Lang, always abusive to his actors, had a running battle with Dietrich. It wasn't a happy ship. 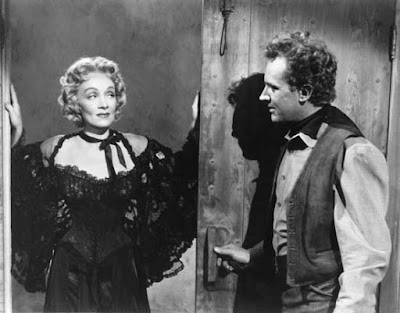 Kennedy a bit miscast
Arthur Kennedy, a young-Van Heflin-lookalike, is really miscast as cowpoke driven mad by lust for revenge, searching for the man who raped and murdered his wife. Of course this is stated in 1950s Hollywood code: “I don’t know how to tell you this,” says the doctor, “but she wasn’t spared anything”. It was Kinch (Lloyd Gough) who did it and although he plays a key role in the drama he is uncredited because he was blacklisted that year. However Kennedy doesn’t know it was Kinch and seeks the murderer here and seeks him there, all over the South-west until he runs into Frenchy Fairmont (Mel Ferrer), “the fastest draw in the West”, expensively hair-styled, who leads him to the rancho (never named as Notorious, only presumably an adjective, but always referred to as Chuck-a-luck) and the oddly named Altar Keane (la Dietrich). It’s (perhaps deliberately) odd that the man playing opposite Destry Rides Again’s Frenchy (Marlene), should be called Frenchy (Ferrer). More role reversal.


There are loads of bandits at Chuck-a-luck, including Jack Elam as Mort (geddit?) Geary, TV’s Superman George Reeves as Wilson and Frank Ferguson as a “preacher”. They all, doubtless scrupulously, pay Altar 10% of anything they make from their robberies. Kennedy suspects them all until he finally learns the truth, that it was Kinch. 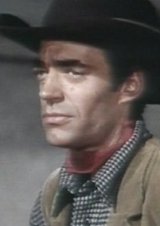 
There’s a good long-haired bandit called Whitey (John Doucette) but sadly he is shot in the first reel, as Jack Elam always used to be (he was known as One-Reel Jack). Fuzzy Knight has a cameo as a barber who cuts the hair of two men at the same time.


There are lots of flashbacks as the story is told and, worse, some of the tale is narrated by a cheesy song as voiceover, telling how Kennedy roamed the West never giving up his quest. It’s pretty grim, a sort of folksy Greek chorus that you wish would stop.


La Dietrich is far more attractive than in Destry (thanks to cinematographer Hal Mohr’s lighting) but still hardly beautiful, and she looks all of her 51 years. She does a bit of what the New York Times reviewer called her “drowsy optics”. She sleepwalks through this picture anyway. There are a few fights orchestrated by Lang and a song or two but they don’t really help.


This Western verges on a satire or, worse, a parody. Or if not, it is a self-referential film about a Western rather than being a Western.


There’s one scene only that really takes fire. It’s one of the flashbacks and shows a ‘horse race’ when the saloon gals ride on the backs of cowboys climbing obstacles in a saloon-bar steeplechase. Otherwise the right word is one I used earlier: turgid. 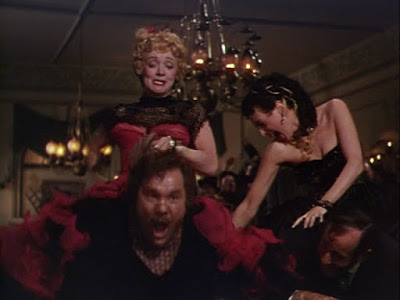 
You should probably watch it, once. It is after all a landmark in the history of the genre and the cast and crew make it worth a look (which is why it has staggered up to a three-revolver rating). But if I were you I wouldn’t buy the DVD. Watch Frank James and Western Union again, instead. A masterpiece it ain’t.